This Week in History, By Pam Lowry

When Abraham Lincoln was born on February 12, 1809 in the wilds of Kentucky, Robert Fulton was applying for a patent on the steamboat which he had successfully launched on the Hudson River just a year and a half before. By the time Lincoln reached the age of 23 in New Salem, Illinois, steamboat transportation was a reality on the Ohio and Mississippi Rivers, the Erie Canal had been completed, and the Baltimore & Ohio Railroad was being pushed west through the Appalachians. But in most areas of Illinois, which had become a state in 1818, frontier conditions were still the norm. 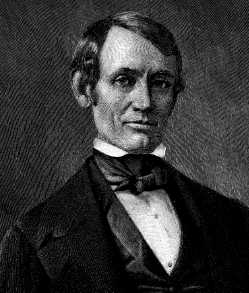 One of the most pressing needs in any state or territory west of the mountains was a good system of transportation. Until Andrew Jackson assumed the Presidency in 1829, the American System of Political Economy, backed by the Whig Party of which Lincoln was a member, had succeeded in developing parts of the Eastern Seaboard and was beginning to build infrastructure in the new lands to the west. But President Jackson had destroyed both the Second National Bank, which funded internal improvements, and the federal internal improvements policy itself by his veto of the Maysville Road bill. This left the new states and territories in a difficult situation, since their revenues were small, coming as they did from new settlers trying to eke out a living in the wilderness.

Abraham Lincoln was one of these Illinois settlers, and at the age of 23 he determined to run for the Illinois State Legislature. In those days, the only requirement for being a candidate was to publish a circular stating one’s “sentiments with regard to local affairs.” This Lincoln did, in March of 1832. From this time onward, Lincoln championed the cause of internal improvements, and during his Presidency, even in the midst of a destructive civil war, he set in motion policies which built America into an economic model for the nations of the world to emulate.

In 1832, the Sangamon River was not navigable by large boats, but it flowed into the Illinois River near Beardstown, where steamboats from the Mississippi were able to dock. The hope of the towns near the river, which included the future Illinois capital of Springfield, rested on making the Sangamon navigable for steamboats. In early 1832, a Springfield citizen advertised that in the spring he would bring a steamboat from Cincinnati up the Mississippi and Illinois Rivers and then navigate the Sangamon River. When it actually came to pass, Lincoln went up to Beardstown with many others from his area, and was given the honor of piloting the steamboat down the Sangamon to Springfield and back.

Lincoln lost his election in 1832 – he garnered most of the votes in his precinct, even though it usually voted Democratic, but he was relatively unknown in the larger Legislative district. In 1834, however, he was elected, and then was reelected in 1836, serving in the famous 1837 session which passed a comprehensive development plan for Illinois, establishing a state bank and funding railroads, canals, and river development.

Lincoln’s original campaign declaration of 1832 showed not only his early support for developing infrastructure, but also his habit of intensely studying a problem until he grasped its essence, and then forging ahead confidently with a solution. He began his declaration to the people of Sangamo County (its early name) by saying: “Fellow-Citizens: Having become a candidate for the honorable office of one of your representatives in the next General Assembly of this state, in accordance with an established custom, and the principles of true republicanism, it becomes my duty to make known to you – the people whom I propose to represent – my sentiments with regard to local affairs.

“Time and experience have verified to a demonstration, the public utility of internal improvements. That the poorest and most thinly populated countries would be greatly benefitted by the opening of good roads, and in the clearing of navigable streams within their limits, is what no person will deny. But yet it is folly to undertake works of this or any other kind, without first knowing that we are able to finish them – as half finished work generally proves to be labor lost. There cannot justly be any objection to having rail roads and canals, any more than to other good things, provided they cost nothing. The only objection is to paying for them; and the objection to paying arises from the want of ability to pay.

“With respect to the county of Sangamo, some more easy means of communication than we now possess, for the purpose of facilitating the task of exporting the surplus products of its fertile soil, and importing necessary articles from abroad, are indispensably necessary. A meeting has been held of the citizens of Jacksonville, and the adjacent country, for the purpose of deliberating and enquiring into the expediency of constructing a rail road from some eligible point on the Illinois river, through the town of Jacksonville, in Morgan county, to the town of Springfield, in Sangamo county. This is, indeed, a very desirable object. No other improvement that reason will justify us in hoping for, can equal in utility the rail road. It is a never failing source of communication, between places of business remotely situated from each other. Upon the rail road the regular progress of commercial intercourse is not interrupted by either high or low water, or freezing weather, which are the principal difficulties that render our future hopes of water communication precarious and uncertain. Yet, however desirable an object the construction of a rail road through our country may be; however high our imaginations may be heated at thoughts of it – there is always a heart appalling shock accompanying the account of its cost, which forces us to shrink from our pleasing anticipations. The probably cost of this contemplated rail road is estimated at $290,000; – the bare statement of which, in my opinion, is sufficient to justify the belief, that the improvement of Sangamo river is an object much better suited to our infant resources.

“ Respecting this view, I think I may say, without the fear of being contradicted, that its navigation may be rendered completely practicable, as high as the mouth of the South Fork, or probably higher, to vessels of from 25 to 30 tons burthen, for at least one half of all common years, and to vessels of much greater burthen a part of that time. From my peculiar circumstances, it is probable that for the last twelve months I have given as particular attention to the stage of the water in this river, as any other person in the country. In the month of March, 1831, in company with others, I commenced the building of a flat boat on the Sangamo, and finished and took her out in the course of the spring. Since that time, I have been concerned in the mill at New Salem….The principal difficulties we encountered in descending the river, were from the drifted timber, which obstructions all know is not difficult to be removed. Knowing almost precisely the height of water at that time, I believe I am safe in saying that it has as often been higher as lower since.”

“From this view of the subject, it appears that my calculations with regard to the navigation of the Sangamo, cannot be unfounded in reason; but whatever may be its natural advantages, certain it is, that it never can be practically useful to any great extent, without being greatly improved by art. The drifted timber, as I have before mentioned, is the most formidable barrier to this object. Of all parts of this river, none will require so much labor in proportion, to make it navigable, as the last thirty or thirty-five miles; and going with the meanderings of the channel, when we are this distance above its mouth, we are only between twelve and eighteen miles above Beardstown, in something near a straight direction; and this route is upon such low ground as to retain water in many places during the season, and in all parts such as to draw two-thirds or three-fourths of the river water at all high stages. 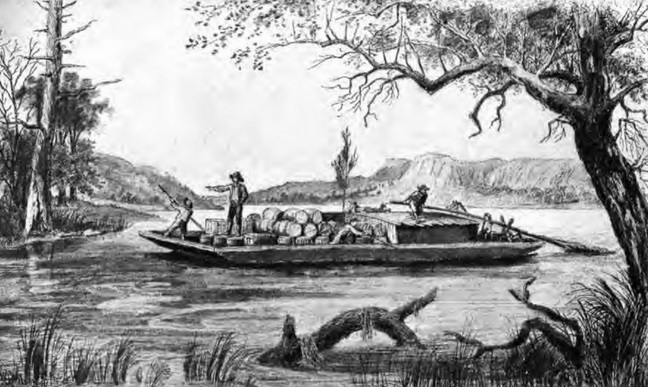 Flatboat on the Sangamon River. Source: Abraham Lincoln: His Youth and Early Manhood by Noah Brooks.

“This route is upon prairie land the whole distance; – so that it appears to me, by removing the turf, a sufficient width and damming up the old channel, the whole river in a short time would wash its way through, thereby curtailing the distance, and increasing the velocity of the current very considerably, while there would be no timber upon the banks to obstruct its navigation in future; and being nearly straight, the timber which might float in at the head, would be apt to go clear through. There are also many places above this where the river, in its zig zag course, forms such complete peninsulas, as to be easier cut through at the necks than to remove the obstructions from the bends – which if done, would also lessen the distance.

“What the cost of this work would be, I am unable to say. It is probable, however, it would not be greater than is common to streams of the same length. Finally, I believe the improvement of the Sangamo river, to be vastly important and highly desirable to the people of this county; and if elected, any measure in the legislature having this for its object, which may appear judicious, will meet my approbation, and shall receive my support.”

Lincoln then cited two other measures he would support: “a law made setting a limit to the rates of usury” and laws supporting education, which he viewed as “the most important subject which we as a people can be engaged in.” In concluding his declaration of candidacy, Lincoln wrote: “Considering the great degree of modesty which should always attend youth, it is probable I have already been more presuming than becomes me. However, upon the subjects of which I have treated, I have spoken as I thought. I may be wrong in regard to any or all of them; but holding it a sound maxim, that it is better to be only sometimes right, than at all times wrong, so soon as I discover my opinions to be erroneous, I shall be ready to renounce them.

“Every man is said to have his peculiar ambition. Whether it be true or not, I can say for one that I have no other so great as that of being truly esteemed of my fellow men, by rendering myself worthy of their esteem. How far I shall succeed in gratifying this ambition, is yet to be developed. I am young and unknown to many of you. I was born and have ever remained in the most humble walks of life. I have no wealthy or popular relations to recommend me. My case is thrown exclusively upon the independent voters of this county, and if elected they will have conferred a favor upon me, for which I shall be unremitting in my labors to compensate. But if the good people in their wisdom shall see fit to keep me in the background, I have been too familiar with disappointments to be very much chagrined. Your friend and fellow-citizen, Abraham Lincoln.

Reprinted with the permission of Colin Lowry