Why We Celebrate Cinco de Mayo

by Edward and Nancy Spannaus

May 5, 2021—In 2012, a delegation of descendants of Union soldiers and officers of the U.S. Civil War traveled to Puebla, Mexico at the invitation of the Governments of Mexico and the State of Puebla, to participate in the 150th Anniversary celebration of the Battle of Puebla. The defeat of the forces of Napoleon III in Puebla on May 5, 1862, thwarted Anglo-French plans to break up the United States and provide crucial material support for the Confederate forces. There is a direct line from the Mexican victory at Puebla, and Lincoln’s victory at Gettysburg 14 months later. 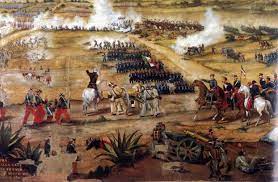 Marching along with the Mexican Army in the parade were representatives of the Military Order of the Loyal Legion of the United States (MOLLUS, the hereditary organization of Union officers formed to prevent a coup against the U.S. government, immediately after the assassination of Abraham Lincoln), and the Sons of Union Veterans of the Civil War (the successor organization to the GAR–Grand Army of the Republic).

The Loyal Legion’s announcement of the delegation stressed the impact of the Battle of Puebla on the U.S. Civil War. “Some historians have argued that France’s real goal was to help break up the American Union… The Mexicans had won a great victory that kept Napoleon III from supplying the confederate rebels for another year, allowing the United States to build the greatest army the world had ever seen. This grand army smashed the Confederates at Gettysburg just 14 months after the battle of Puebla.”

To underline the point: By defeating the French, the Mexican patriots prevented them from being able to send much-needed military equipment to the Confederacy, supplies which could possibly allowed them to be victorious over the Union troops.

Britain and France had been conspiring since the outbreak of the Civil War, to try to destroy the United States by both directly supporting the southern rebellion, and by using Mexico as a flanking operation against Lincoln. In 1862, Earl Russell, the British Foreign Secretary, and Lord Palmerston, the Prime Minister, cooked up a scheme to propose mediation between the North and South, on the assumption that the North would refuse, and thus provide a pretext for European recognition of the South as an independent nation. The Union repulse of the Confederate forces at Antietam in September 1862, followed by Lincoln’s Emancipation Proclamation, rendered the Russell-Palmerston plan impossible to carry out, because of popular support for the Union and opposition to slavery, among the British population, especially the English working class.

Meanwhile, in 1861, Britain, France, and Spain had agreed on sending their navies to attack the Republic of Mexico, to overthrow the Republic and install as their puppet the Hapsburg Prince Maximilian, who was then to draw the Confederacy into the French-Hapsburg Empire. The pretext was to collect debts incurred by Mexico during its civil war. Britain and Spain settled for payments offered by Mexican President Benito Juarez, but France went ahead and invaded, despite Lincoln’s warnings. Napoleon III’s army landed in Veracruz in 1861, and prepared to move toward Mexico City to capture the capital and overthrow the government. 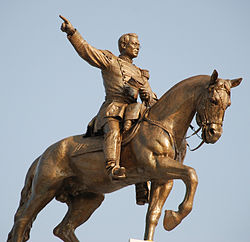 A monument to Ignacio Zaragoza, the Mexican commander at Puebla.

But on May 5, 1862, a Mexican army of professional and citizen soldiers inflicted a major defeat on a 6000-man French army. The French were forced to regroup, and it took another year for them to  occupy Puebla with a much larger force, and then move on to eventually occupy Mexico City. Juarez kept his government intact while moving it around in Mexico in order to survive.

During the same period, the British- and French-backed Confederate forces undertook their second invasion of the North, which was halted with the U.S. Army’s victory at Gettysburg on July 3, 1863.

As was reported in the Summer 2012 issue of the Loyal Legion Historical Journal: “Had the confederate artillery been fully supplied with modern and high-quality French munitions and guns, the highly compacted Union lines could have been severely hit and weakened, and it would have given a real opportunity for a successful charge and a different outcome of the Battle of Gettysburg, and possibly set the stage for the victory needed by the Confederate States of American to gain diplomatic recognition by the European Powers and the military support that this implied.” (For a fuller historical discussion, see the Spring issue.)

At the end of the U.S. Civil War two years later, General Phil Sheridan took 100,000 Union soldiers to the Mexican border as a show of force against Maximilian and France, and the U.S. also provided modern weapons and military equipment, including medical equipment. In recognition of his role in aiding the Union, Juarez was made an honorary member of the Loyal Legion.

UCLA professor David Hayes-Bautista in his 2012 book Cinco de  Mayo, An American Tradition, provides us with additional background on this now-widely celebrated “Mexican” holiday. It turns out that the first Cinco de Mayo celebrations, including festive parades, were actually held in the southwestern United States starting in 1863, organized by pro-Union Hispanics inspired by the victory at Puebla. The tradition then continued  after the Civil War, with veterans of both the Mexican and Union armies joining in. Indeed, the celebrations in the United States were, and are, much more extensive than those in Mexico, where Cinco de Mayo is only a holiday in the town of Puebla. 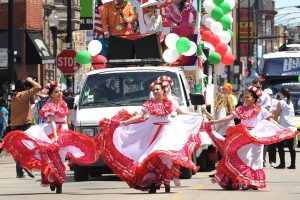 Hayes-Bautista explains this anomaly in a number of videos, as well as in his book. What motivated the Hispanics in California (and elsewhere), he says, was their fear of victory by the Confederacy, which, one should recall, was winning battle after battle during the first years of the Civil War. Recall that the Hispanic population in California were Mexicans until the entry of California into the United States in 1848, and as Mexicans, they had enjoyed Constitutionally-protected freedom[1] from slavery and racial discrimination since the founding of the Mexican republic in 1810. Thus, they looked at the threat of a Confederate victory as potentially taking away their freedoms.

The victory at Puebla, which defeated the pro-Confederacy French, was thus a victory for freedom and democracy in the United States as well. What began as a celebration of the Mexican General Ignacio Zaragoza who led the Mexican troops, turned into a more universal celebration of delivery from the slave threat.

Nancy Spannaus is the author of Hamilton Versus Wall Street: The Core Principles of the American System of Economics. Edward Spannaus is an associate member and officer of MOLLUS.

​[1]Unlike the U.S. Constitution, the Confederate Constitution explicitly said that no bill could be passed abridging the right to own “Negro slaves.” For other differences, see this article.