Jan. 17, 2021—While much of the nation celebrates Martin Luther King. Jr. on this weekend, my mind also goes to another American fighter for the common good, Founder Benjamin Franklin. (1706-1790) Today is the 315th anniversary of Benjamin Franklin’s birth. Franklin was the quintessential organizer of our American Republic, working to promote the ideas and establish the leadership that would bring our Revolution, and organization of government, to a successful conclusion. 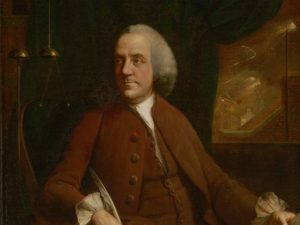 A portrait of Benjamin Franklin in 1762.

Franklin was one of six men who signed both the Declaration and the Constitution. He established the postal service that helped unify the colonies in the fight for independence, and tirelessly fought, often through disarming humor, for the institutions and concepts that would bring Americans the economic progress which they deserved. All the while, he served as a center for scientific collaboration with republicans all around the world. Such a short summary does not do justice to his multi-faceted, and often secret, role; it is only indicative.

Of special note today would be Franklin’s insistence on bringing a petition from the Pennsylvania Society for the Promotion of Abolition of Slavery before the U.S. Congress in February 1790. Franklin was president of that Society, and this was his last political act before his death in April of that year.

There is a strong bond of ideas, a continuity, between Franklin’s struggle and that of Dr. King. Both understood their commitment to the ideals of the Declaration of Independence to include action to uplift the material, as well as moral, condition of their fellow men. They knew that fulfilling the promises of our Constitution would be a “work-in-progress.”

Both men dedicated their lives, one cut tragically short and the other happily long, to promoting the common good of mankind, the “general welfare,” to which our Constitution commits us. The noble accomplishments and thoughts of these two American heroes must not be lost to history. We clearly need them now.

Writing to a religious friend in 1753, Benjamin Franklin encapsulated his life’s mission thus:

The Faith you mention has doubtless its use in the World; I do not desire to see it diminished, nor would I endeavour to lessen it in any Man. But I wish it were more productive of Good Works than I have generally seen it: I mean real good Works, Works of Kindness, Charity, Mercy, and Publick Spirit; not Holiday-keeping, Sermon-Reading or Hearing, performing Church Ceremonies, or making long Prayers, fill’d with Flatteries and Compliments, despis’d even by wise Men, and much less capable of pleasing the Deity. The Worship of God is a Duty, the hearing and reading of Sermons may be useful; but if Men rest in Hearing and Praying, as too many do, it is as if a Tree should value itself on being water’d and putting forth Leaves, tho’ it never produc’d any Fruit.

Your great Master tho’t much less of these outward Appearances and Professions than many of his modern Disciples. He prefer’d the Doers of the Word to the meer Hearers; the Son that seemingly refus’d to obey his Father and yet perform’d his Commands, to him that profess’d his Readiness but neglected the Works; the heretical but charitable Samaritan, to the uncharitable tho’ orthodox Priest and sanctified Levite: and those who gave Food to the hungry, Drink to the Thirsty, Raiment to the Naked, Entertainment to the Stranger, and Relief to the Sick, &c. tho’ they never heard of his Name, he declares shall in the last Day be accepted, when those who cry Lord, Lord; who value themselves on their Faith tho’ great enough to perform Miracles but have neglected good Works shall be rejected.[2]

Franklin is often characterized as the quintessential “practical man,” the compromiser or the manipulator. Yet, as the late H. Graham Lowry elaborated in his book How the Nation Was Won,[1] Franklin was successful precisely because he was pursuing a grand mission, and subordinated his every particular project to that mission. The result of this project of grand strategy he worked on with Americans and republican networks internationally, was a new kind of government, a republic which demands of its citizens a certain kind of commitment to the common good. Franklin was the embodiment of a commitment to such a mission, like Lincoln and King after him. 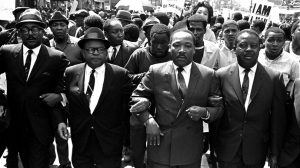 So, as we celebrate Dr. King, and dedicate ourselves to the fight for a Constitutional republic which provides equal justice, opportunity, and prosperity for all, let us also remember his predecessors such as Ben Franklin. We build on their shoulders as well.