Water, Water Everywhere, but Not a Drop to Drink!

Feb. 7, 2019–How is it possible that, with 71% of the earth’s surface covered with water, we have a shortage of fresh drinking water on the planet?  Might one of the reasons be that, in addition to criminal underdevelopment of the developing nations, some U.S. water infrastructure goes back to the Civil War era and has not been upgraded for more than 100 years? 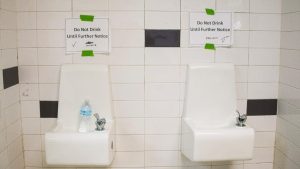 When water problems erupted in Flint, Michigan in 2014, people thought it was an isolated case. But since then, other areas of the country have sprung leaks. To put this into a global context, Michigan, because of its location within the Great Lakes Region, supplies 20% of the world’s fresh water.  Water and infrastructure are vital to the health of our nation. It’s time to pay attention.

Since the Flint water crisis erupted, further cases of dangerous water deterioration have grabbed headlines. Over the last several months, these crises have been concentrated in school systems around the country.

The situation was summarized in a Harvard Study released this January. Its findings were reported in an article by Daniel Vock, the transportation and infrastructure reporter for Governing magazine, in an article entitled “Lead in School Water: Less Than Half the States Test for It, and Fewer Require It.” Among the Harvard report’s conclusions, Vock writes, are the following:

Pittsburgh has now joined Flint as the venue for new prosecutions for lead poisoning. On Feb. 1 Pittsburgh’s Water and Sewer Authority (PSWA) was criminally charged with mishandling a lead pipe replacement program; it faces a possible $2.4 million in fines by state environmental regulators. High levels of lead in the water have been found over many years in Pennsylvania, and Pittsburgh is under a state mandate to replace 7% of its lead service lines per year. 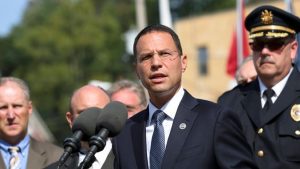 According to AP, in 2017, Allegheny County Controller Chelsa Wagner accused the water authority and local health officials of failing to adequately protect residents from lead, likening Pittsburgh to the water crisis in Flint, where 15 defendants faced criminal charges over lead in the drinking water supply.

According to a further investigation conducted by The Incline, “It’s certainly unusual for a utility to be criminally charged, but it’s not unheard of. In California, the state’s largest utility, PG&E, was convicted on felony counts related to a deadly pipeline explosion in 2010 that saw the company fined $3 million and its employees ordered to perform thousands of hours of community service.”

Pennsylvania Attorney General Josh Shapiro’s office could not recall a prior instance of any Pennsylvania utility being criminally charged, but he said the case against PWSA follows a “rigorous exam of the facts.”

Lara Fowler, a senior lecturer in law at Penn State and assistant director of the university’s Institutes of Energy and the Environment, told The Incline that attempts to hold utilities accountable are becoming more common nationwide.

“I think it seems to be getting more common because people are super sensitive about the lead question,” Fowler said, pointing to the lead water crisis in Flint, Mich., and one building right now in Newark, N.J.

“It’s a warning shot across the bow,” Fowler said of the charges against PWSA. “Sometimes if you can make an example of a community or an entity, you can get others to take notice.”

Ironically, the penalties for lead in the water would be put on the backs of the people. PWSA officials said a fine would ultimately come from sewer and water fees paid by ratepayers. It might even result in a rate hike in the double digits.

Water is not a constitutional obligation?

Meanwhile in Flint, investigations into the water crisis are being taken over by the newly elected Democratic Attorney General Dana Nessel. These involve hundreds of civil lawsuits representing tens of thousands of victims.

According to an article in The Guardian on January 18, 2019, “Critics complained that the three years investigation by the Republicans were grossly insufficient, resulting in little accountability, with no fines or jail time.”  Nessel charged that previous prosecutions were conducted as “politically charged show trials,” aimed at benefitting her predecessor, Republican Bill Schuette.  Although initially the special prosecutor appointed to deal with the lead crisis charged suspects with felonies, his team ended up negotiating plea bargains for misdemeanors. For this, Schuette spent over $25 million in taxpayer money on legal fees. 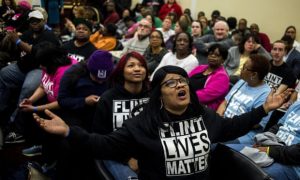 A demonstration in Flint in response to the water crisis.

The Flint water crisis erupted when the financial manager appointed by the state in April 2014 ordered the city to save money by pulling water from the Flint river instead of purchasing it from Detroit. The first sign of trouble came with an outbreak of Legionnaires disease which killed 12 people, and was considered by some experts to have been caused by the contaminated water. Soon after, residents began experiencing lead poisoning symptoms.

In an egregious statement, reported by the Guardian, Schuette has argued the state doesn’t have a constitutional obligation to provide clean water.

A wall won’t protect us from our own water

On January 14 Newark Mayor Ras Baraka sent an open letter to President Trump in which he urged the president to consider “a true emergency that puts millions of our citizens at risk.” Newark is currently in the middle of a serious water quality crisis, as I previously reported. I quote his letter in full:

I am writing to express my deep concern that you are seriously thinking of declaring a national emergency to fund a proposed $5 billion border wall. I want to bring your attention to a true emergency that puts millions of our citizens at risk: The decaying infrastructure of our water systems which has created a crisis in Newark, the State of New Jersey and across America. Dangerously high levels of lead are entering homes and our children’s blood through lead service lines despite the fact that any level of lead can damage the developing brains of young children.
‍
Besides Newark, more than 20 other New Jersey cities and towns have elevated levels of lead in their tap water, and so do thousands of municipalities in our nation. This crisis, mainly, affects older black and brown cities with limited resources and serious health issues that are systemically overlooked by every level of government. In prioritizing environmental justice, saving children and their families within these cities is a must. Although the situation in Newark is very different from that of Flint, our need to replace lead service lines is equally urgent. I join in solidarity with the I I-year-old girl known as Little Miss Flint who told you that spending $5 billion to make water safe is a much better way to protect Americans than building the wall.
‍
In the short term, we are distributing 40,000 water filters and cartridges to affected homes in Newark. We are also changing our corrosion control system. But, the only real solution to save this and future generations of children is to replace lead service lines. It will cost an estimated $70 million to replace the lead service lines in Newark, hundreds of millions more to replace them in New Jersey, and an estimated $35 billion to replace all of the lead service lines in America. Achieving this is possible only with financial help from the federal government.

You have been saying that a border wall will save thousands of American lives, but that’s simply not true. Instead of wasting billions of dollars to keep an ill-conceived campaign promise, I urge you to use our resources in a way that will truly save American lives–help repair our nation’s deteriorated water infrastructure.

Show me the money

According to a new report from the National Association of Corrosion Engineers (NACE), a group created in 1943 by 11 corrosion engineers from the pipeline industry, U.S. infrastructure is reaching the end of its economically useful and serviceable life cycle.  “Today, bridges, pipelines, roads, power generation and transmission, and water treatment facilities [are] all are at risk of corrosion-related failure,” according to the Association’s 2019 Spotlight on Corrosion Report. 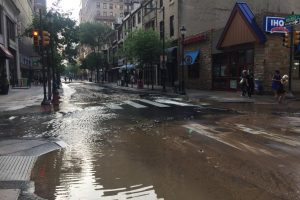 A water main break in central Philadelphia in mid-2018.

The cost of dealing with corrosion in infrastructure facilities across the world is estimated at $2.5 trillion, the report found, but applying advanced existing techniques could save up to $875 billion of that sum, or about 35% of the cost.

According to American Society of Civil Engineers (ASCE), which gave the state of U.S. drinking water a D in its 2017 infrastructure report card, we would need $1 trillion over 25 years to fix the problems with the U.S. water supply system. Presently the ASCE estimates that, between 2016-2025, only 30% of the funds required to meet the needs for potable water infrastructure will be met.

These sums appear “out of sight” to most politicians. Yet if the draft legislation for a National Infrastructure Bank modeled on Alexander Hamilton’s Bank of the United States, proposed by associates of this blog, were enacted, we would have the trillions of dollars needed to get these projects underway.

The need for new technologies

There is no doubt that we must take immediate action in replacing our decrepit water system, but it is also urgent that we apply new advanced technologies to further address the problem.  The mere fact that one-fifth of the world’s population has no access to safe drinking water, particularly in Asia and North Africa, is unconscionable. Since the oceans hold 96.5% of all earth’s water, they seem to be the obvious place to start.

The solution lies in desalination and nuclear power.

U.S. News took up this issue in a January 4, 2019 report on desalination plants in the United States.

One study from 2016, they report, counted more than 1,330 plants in operation. The largest, in Carlsbad, California, supplies 50 million gallons a day to some 400,000 residents in San Diego County. The process being used was pioneered in the U.S. The Bureau of Reclamation funded an office on saline research as early as the 1950s.

The Carlsbad plant is using reverse osmosis technology and is operating with great efficiency. Yet, more advanced methods could be put in place. As Joseph Brant, associate professor of environmental engineering at the University of Wyoming, said. “What we need is a paradigm shift from traditional methods to alternative technologies.” 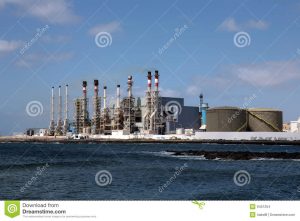 Those alternative technologies include nuclear desalination, which is already a proven method on the U.S. nuclear submarine fleet, and in countries such as Japan. A review of the state of research on this scientific frontier is available here. The increase in application of this method depends heavily on the willingness of governments to back the research and construction required. On the table, for example, is the construction of small modular reactors  which could provide both power and desalination.

In President Trump’s State of the Union address he called upon Congress to help him build the nation’s infrastructure.  “Both parties should be able to unite for a great rebuilding of America’s crumbling infrastructure.   I know that the Congress is eager to pass an infrastructure bill—and I am eager to work with you on legislation to deliver new and important infrastructure investment, including investments in the cutting edge industries of the future.  This is not an option.  This is a necessity.”

Fine words, but we need the commitment from both the Administration and the Congress to get the job done. Why wait?  The solutions are there.  We must demand from our leadership that they implement them now.