April 2, 2018—Representatives of the Russian and U.S. space agencies will meet in Houston, Texas April 9, in order to further discussion about setting up a joint space project, a Moon Orbiter station dubbed Deep Space Gateway. The specific objective, according to Sputnik news service, is to set common standards for the project. 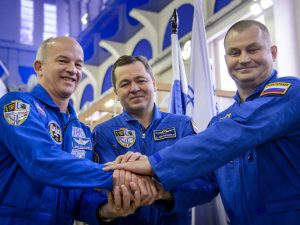 A joint Russian-American crew ready to go to the ISS in 2016. (NASA/Ingalls)

The meeting follows on a series of conferences that were kicked off by an agreement reached in September 2017 between NASA and Roscosmos on a joint study of establishing a habitable outpost in orbit around the Moon. The two agencies subsequently agreed to do a four-month experiment imitating conditions of flight to the lunar station, according to a statement issued by the Russian Institute of Science on March 16. The experiment is set to begin in 2019.

On January 23 of this year, all the parties to the International Space Station (ISS)—Russia, the U.S., the European Union, Japan, and Canada–met in Tokyo, where they also discussed how each of the participants could move toward further compatibility of components for the new orbiter . That orbiter is anticipated to replace the ISS when its parts begin to wear out, now expected to be in the later 2020s. From that orbiter, the space-faring nations could maintain and expand space exploration, both to the Moon and into Deep Space.

Space continues to be one major area of cooperation between Russia and the Western nations, including the United States. Russian Soyuz rockets have been the only means of transportation of personnel to the ISS since 2011, when the U.S. space shuttle program was decommissioned. Under the Obama Administration, plans for a replacement orbiter were deep-sixed, and the only U.S. replacement in the works at present, are commercial enterprises like Space-X which have been able to deliver supplies, but are unsafe for human travel.

U.S.-Russian space collaboration began in the midst of the Cold War (1975). It could well serve as a model for sane international cooperation not only between the U.S. and Western Europe with Russia, but also with China, whose space program is making major strides, but which continues to be excluded from the ISS process due to blacklisting by the U.S. Congress.