by Nancy Spannaus
Jan. 25, 2018—The Jan. 22 leak of an outline of President Trump’s national infrastructure plan, which he says he will announce at his Jan. 30 State of the Union address, has amped up the national discussion on infrastructure funding. On Jan. 24, the President told a meeting of mayors that his plan would “stimulate” anywhere from $1 to $1.7 trillion in investment in critical areas of the economy.

But a close look at the purported plan reveals the sad truth: Not only is there no coherent outline or vision for what should be built, as there was in the infrastructure plans of Franklin Roosevelt or Abraham Lincoln, but there is hardly any Federal commitment. The thrust of the proposal is to provide incentives (not necessarily monetary) to get states, local governments, and the private sector to do the job. If anything, the Federal plan proposes to cut back the Federal role, for example, by reducing the amount of Federal participation in infrastructure projects—in the case of highways, from 50 to 80% of the cost currently, to no more than 20%.

This aspect reveals the plan to be a cruel hoax, as the localities are already totally strapped to provide for their share of infrastructure improvements at present. 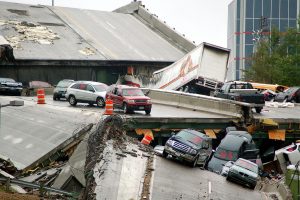 This Minneapolis bridge collapsed in 2007, highlighting the nation’s infrastructure disaster.

Envisioned by the leaked Trump plan are outright privatizations, permitting states to charge tolls on existing highways, and an expansion of state and local subsidies to private firms to build needed bridges, road, and water projects. In a bow to reality, the plan calls for outright grants to rural areas for their road projects, since public-private partnerships are known losers in these areas. But the bulk of the plan is devoted to providing incentives to non-Federal investors, with a priority on projects that can show they will draw “new non-federal revenue to create sustainable, long-term funding.”

What this means in English is that projects will not be judged as to their impact on overall productivity of a region, or the country, but on its ability to make money. Under this “logic,” private companies will be putting forward plans based on their expectation of making 10% plus profits over the short-term, precisely the kind of scheme that has led to disaster in places like Bayonne, New Jersey, where the city sold off its water system to private interests, and saw its water rates go through the roof, while the system further decayed.

Is money-making really the criterion for meeting our nation’s massive infrastructure needs today? Who will invest in rebuilding the power infrastructure of Puerto Rico, for example? Within the context of the current financial system, and Trump’s purported plan, the only ones to do so will be profiteers who will concentrate on a few select areas, and let those stuck in the countryside perish in the dark—or migrate in desperation to the continental United States.

It was precisely to prevent such behavior that FDR launched his New Deal program for providing affordable power, regulated in the public interest, for all sections of the American people and landscape, including the rural areas the power company profiteers had avoided. Projects such as the Grand Coulee and Columbia dams, the Rural Electric Administration, and mostly dramatically, the Tennessee Valley Authority provided public credit on a decades-long basis, to lift up the productivity and living standards of people over the long term. These projects paid for themselves by improving the health and welfare of the American population. 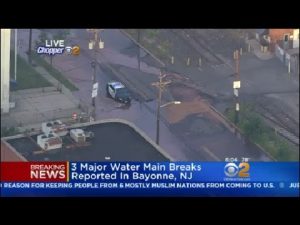 Trump’s purported plan-on-the-cheap would involve a mere $20 billion a year from the Federal government over ten years. This compares to nearly $600 billion being allocated for defense spending. Yet, what kind of defense is there for a population faced with a crumbling transport, power, and water infrastructure that threatens its life and limb? This is not a question of competitiveness; it’s a question of survival, and the prerequisites for progress.

Even collaborators of the Administration, such as former Transportation Secretary Ray LaHood, have spoken out to the effect that the Trump proposal, as far as is known, is totally insufficient to the need. In an interview with MSNBC Jan. 24, LaHood emphasized the need for expanding the “plan” with revenue sources including an increase in the gas tax (which receipts are to be dedicated to highway repair) and an infrastructure bank. What he means by an infrastructure bank has not been spelled out, but proposals being floated by other Republicans reflect the same flim-flam methods as most public-private partnerships—promising massive tax breaks for corporations to repatriate their money into such a bank, and reap the profits through tolls and user fees as well.

The proposal from the Trump team contains “fat” for high-rolling investors, but lacks the “beef,” the public credit principle which was first put forward and implemented by Alexander Hamilton in his Bank of the United States. The United States government has trillions of dollars of capital at its disposal, if it would but offer exchange of current Treasury debt for stock in a new Infrastructure Bank. That capitalization, augmented by the sale of stock to private investors, can serve as the basis for precisely the kind of lending necessary to rebuild the transportation grid, the leaking water systems, and the retrograde power system. The United States needs trillions of dollars in investment, a major component of which should be in the “high-end” projects of high-speed rail and nuclear power.

President Trump’s proposal calls for only 5% of the funds to be used for projects with new technologies. 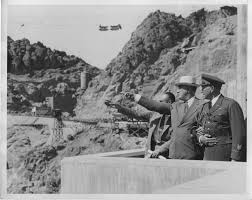 FDR at the opening of Boulder Dam in 1936, a project in the desert that led to a transformation of the Southwest United States.

Nor can the private banking system be expected to cooperate productively with any infrastructure program if Glass-Steagall banking separation is not re-established. As we have seen over the past 10 years of banking “recovery,” trillions of dollars can flow into the banking system and never make it into investment in the physical economy (like infrastructure), thanks to the current system’s support and protections for risky, high-yield investments. Once that stops, the promise of a steady long-term yield of 4-6% through investment in infrastructure, will once again be attractive—and actually build up the broad future tax base.

There’s much more that could be said about the theory behind Trump’s plan, but we best wait until it is presented. Other alternatives also deserve further debate, which we will provide in the future.
In the meantime, the touchstone for approaching the infrastructure “issue” is the proposed legislation for a National Infrastructure and Manufacturing Bank, now circulating in Congress. Its text can be found here.