March 18, 2019—Recent announcements by the Trump Administration on critical infrastructure projects, amount to nothing less than sabotage. Without effective Congressional action to ensure Federal government funding of major capital investments in infrastructure like that now under threat, there is no hope for a sustainable economic recovery in this country.

These decisions come in the context of the Trump Administration’s issuance of its fiscal 2020 budget announcing the Administration’s priorities. The White House budget summary makes no mention of infrastructure. 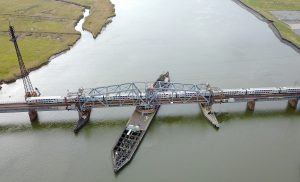 The Portal Bridge, a key link on the Northeast rail corridor, and over 100 years old.

However, the White House did append a fact sheet on that subject, entitled “Deliver 21st Century Infrastructure.” The less-than-2-page summary announces the Administration’s intent to pass a long-term surface transportation reauthorization bill (the current one dies at the end of 2020), and to spend a $200 billion for other infrastructure projects. This $200 billion is supposed to leverage $1 trillion in overall spending—a drop in the bucket compared to current needs.

Mentioned in this context are water projects and “innovative” projects like 5G wireless, rural broadband, and advanced manufacturing. No specific critical projects are mentioned.

Cuts Across the Board

The scope of the cuts the Administration wants to make to current infrastructure spending levels are shockingly deep.

For example, according to a press briefing by a spokesman for the Army Corps of Engineers on March 12, the Trump 2020 budget would slash its operations.  Its construction budget would be reduced by 46% from this year’s level, and its operations and maintenance budget by 48%. In addition, the Administration plan calls for zeroing out the Water Infrastructure and Innovation Act program, which is supposed to provide low-interest loans for water projects around the country. 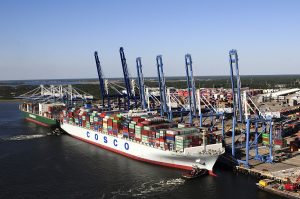 Charleston harbor, one of the few projects funded to completion in the 2020 budget.

The Corps spokesman summarized by saying that the budget plan only funds projects already underway, and only four of them to completion.

In the area of transportation, according to the American Public Transportation Association, the budget plan calls slashing the Capital Investment Grants program, which provides grants to commuter rail and bus service. According to Streetsblog USA, the proposed cuts to Amtrak amount to 23%.

It is well-known, of course, that Congress can, and usually does, dramatically modify an Administration’s wish-list budget. But as of now, there are no ambitious Congressional plans on the table either.

The Administration’s explicitly cited concern in all these decisions is to save taxpayer money. Indeed, the excuse given for the low rating of Gateway is the alleged insecurity of the local funding contribution, a claim local New Jersey and New York officials deny.

This crisis cries out for a shift in the direction of establishing a National Infrastructure Bank by capitalizing a portion of current government debt on the scale needed to pour trillions of dollars into major infrastructure ventures, as well as needed repairs. This proposal would not require major new Federal spending, which would burden the average taxpayer, nor would it demand huge user fees and increases in local taxes.