By John Ascher October 18, 2021-Hundreds of cargo ships now wait weeks at various US ports, as the impact of the Covid pandemic has created labor shortages, while simultaneously increasing consumer purchases. The globalized “just in time” system has been pushed to the brink.

The Biden Administration has responded with a so-far limited approach, attempting to increase major port operations to 24 hours on the West Coast.

One can listen to multiple media reports reassuring the American consumer that this will be over soon, hopefully in time for Christmas. (During this pandemic, I believe most have become rather leery of predictions of when bad things will be “over”.) 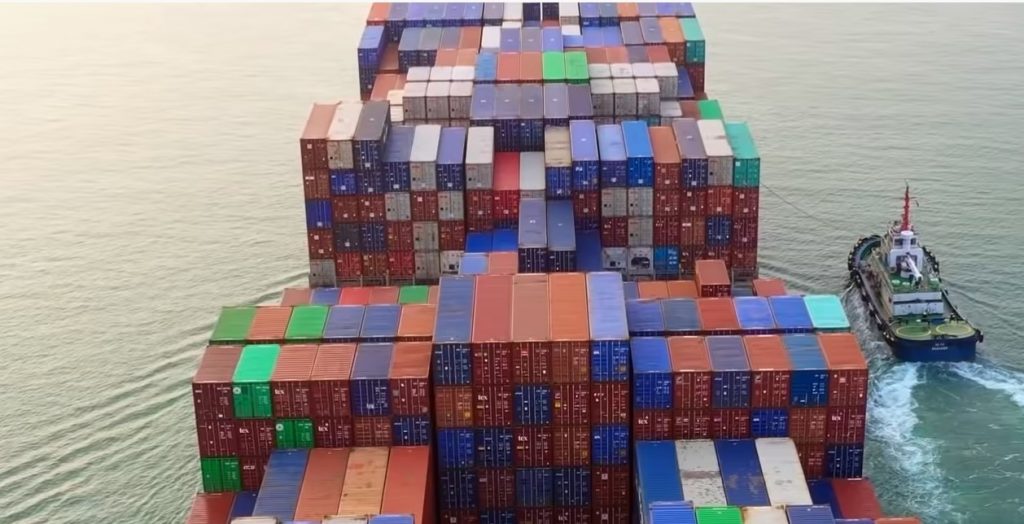 One feature of the supply chain woes is that warehouse operations are unable to find enough workers to fill low wage jobs. Article after article document that US workers in the service economy, and elsewhere, are simply not going back to work, or are quitting. We may be on the verge a major US strike wave, certainly motivated by not only low wages and benefits, but the general harsh working conditions.

The income inequality which underlies our “great prosperity” seems finally to be blowing up in our faces.

Did we have to end up here?

I am reminded of the not-so-well-known final speech of our 25th US President, William McKinley, given at the September 1901 Pan American Exposition in Buffalo. (He was assassinated there.) This speech was at a different turning point: the vast US industrialization which characterized the entry into the 20th Century, which included innovations like electrification of the economy. (Electricity and lights were amongst the attractions of the Buffalo 1901 exposition.) 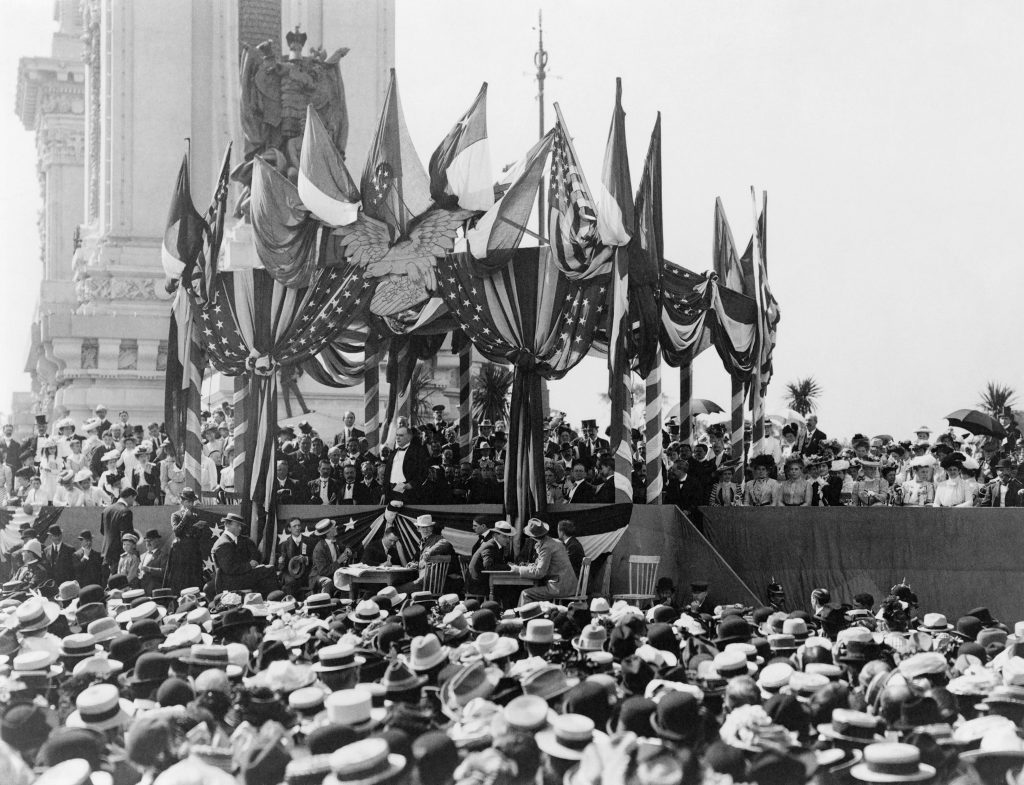 President McKinley’s Final Address in Buffalo Before His Assassination (Wiki)

McKinley was the last US President elected who had served in the Civil War. He was a Republican in the Lincoln tradition, who had long served in the US Congress, and was known as a supporter of protective tariffs and the “American System” in the tradition of Henry Clay.

Amongst the points made by McKinley are the following quite relevant to our current circumstances and political debates: (All quotations)

1) The quest for trade is an incentive to men of business to devise, invent, improve and economize in the cost of production. Business life, whether among ourselves or with other people, is ever a sharp struggle for success. It will be none the less so in the future. Without competition we would be clinging to the clumsy antiquated processes of farming and manufacture and the methods of business of long ago, and the twentieth would be no further advanced than the eighteenth century. But though commercial competitors we are, commercial enemies we must not be.
2) The wisdom and energy of all the nations are none too great for the world’s work. The success of art, science, industry and invention is an international asset and a common glory. After all, how near one to the other is every part of the world. Modern inventions have brought into close relation widely separated peoples and made them better acquainted. Geographic and political divisions will continue to exist, but distances have been effaced. Swift ships and swift trains are becoming cosmopolitan. They invade fields which a few years ago were impenetrable. The world’s products are exchanged as never before, and with increasing transportation facilities come increasing knowledge and larger trade.
3) My fellow citizens, trade statistics indicate that this country is in a state of unexampled prosperity. The figures are almost appalling. They show that we are utilizing our fields and forests and mines and that we are furnishing profitable employment to the millions of workingmen throughout the United States, bringing comfort and happiness to their homes and making it possible to lay by savings for old age and disability. That all the people are participating in this great prosperity is seen in every American community, and shown by the enormous and unprecedented deposits in our savings banks.
4) We must not repose in fancied security that we can forever sell everything and buy little or nothing. If such a thing were possible, it would not be best for us or for those with whom we deal. We should take from our customers such of their products as we can use without harm to our industries and labor. Reciprocity is the natural outgrowth of our wonderful industrial development under the domestic policy now firmly established. What we produce beyond our domestic consumption must have a vent abroad. The excess must be relieved through a foreign outlet and we should sell everywhere we can, and buy wherever the buying will enlarge our sales and productions, and thereby make a greater demand for home labor. The period of exclusiveness is past. The expansion of our trade and commerce is the pressing problem. Commercial wars are unprofitable. A policy of good will and friendly trade relations will prevent reprisals..

Now, compare that vision with where we have ended up under our system of globalized free trade.

Our problem is no longer that we produce so much that we have to find an outlet for our surplus. Instead, we have an economy where 80% of our GDP is consumer spending, and we buy these goods largely from outside of the United States.

The general benefits of technological advance, touted by President McKinley, have now been replaced by a US economy with a $5-8 trillion deficit in our physical infrastructure. The US internally resembles an underdeveloped country. (Yet, we do have technology concentrated in Information Technology, and some foolishly believe that a giant dose of digitization will unclog the supply chain making all American consumers happy again.) (1)

The growth of our economy under this globalization has not lifted the living standards of our US workforce overall. Quite the contrary, we have unparalleled income inequality, and a shrinking middle class.

Finally, the United States has not remained “the beacon of hope”, spreading our knowledge and prosperity around the world. Trade wars are brewing, and we have decided to make China, the largest economy in the world, our opponent. The success of other economies like China, is not seen as a benefit, but a threat. Not the spirit of non-confrontation addressed by President McKinley.

Is there a way we could recapture the high ground in this crisis?

Ever been stuck in a doctor’s waiting room watching HGTV? Don’t you think it is time for an “Extreme Makeover?”

The best “American System” way available for rebuilding the American “Home” is the proposed $5 trillion National Infrastructure Bank (HR3339). This would address all parts of our supply chain, including ports, rail, and highways. The legislation also includes a “Buy American” clause which will facilitate rebuilding US industry.

Besides the major infrastructure projects, there are features of the bill which address the extreme income inequality and equity issues, both hallmarks of our globalized economy.

The United States needs to reverse what was done by Wall Street to the real economy in the 1970’s. Then, we were plunged into our post-industrial globalized free market system and the good paying union jobs became increasingly unavailable, blocking those trying to join the dwindling well-paid unionized US workforce. This particularly impacted the African American population in major cities. Cities were ravaged with drugs, and then the population incarcerated with the “war on drugs.”

Would you like your supply chain unblocked for Christmas? Or even Christmas 2022?

We can move forward with new technology, but let’s do so while we ensure that this progress is to the benefit of all.

That was always the promise of the “American System”, even if we have yet to live up to it.

(1) “Global Supply Chains’ Crisis Is Much Bigger Than The Pandemic; The Transformation They’re Undergoing Is The Cure“, by Harry G. Broadman, Forbes,  September 30 2021.