Feb. 22, 2019—George Washington deserves to be celebrated in his own right, but I am going to devote this brief Washington’s Birthday post to the Washington-Hamilton alliance.  The two men shared a vision of developing this vast country into a strong continental republic, committed to the “blessings of liberty” and technological progress. They would admit they didn’t achieve all they wished, or all that was necessary, but they got us off to a good start.

From their collaboration—for which the groundwork was crucially laid by Benjamin Franklin—the American System of Economics was born.

In this context, I highly recommend the book Washington and Hamilton: The Untold Story of the Extraordinary Alliance That Forged Our Nation and the Unlikely Duo Behind It. This book by Stephen E. Knott and Tony Williams was published in 2015, and I had the pleasure of reading it a couple years ago. After short discussions of the divergent backgrounds of the two men, the book follows their collaboration from the Battle of New York through to the period of the Quasi-war with France (1798-99), when Washington died.

In their postscript, Williams and Knott emphasize the teamwork between the two men, concluding that Washington’s “emotional intelligence” and Hamilton’s genius at the “science of politics” led to a team which was greater than the sum of its parts. Clearly Hamilton and Washington did not always agree on how to achieve their common goals of building a strong continental, technologically progressive republic in which slavery would be abolished, but the bonds which they forged during the Revolutionary War ran deep. Their ties were especially close during Washington’s second administration, Williams and Knott write, when the Jeffersonians unleashed their newspaper filth against President Washington, as well as Hamilton.

George Washington’s commitment to the United States becoming a great industrial, as well as agricultural, power has often been overlooked, or buried in the Jeffersonian lie that he was merely a rubber-stamp for Hamilton. As Edward Lengel pointed out in his 2016 book First Entrepreneur: How George Washington Built His—and the Nation’s—Prosperity, Washington was promoting the creation of manufactures from 1764 on, when he began to move out of the tobacco business. (See my review.)

In Virginia’s Fairfax Resolves of 1774, Washington wrote the 14th  Resolve, which asserted “that it is the indispensable Duty of all the Gentlemen and Men of Fortune to set Examples of Temperance, Fortitude, Frugality and Industry; and give every Encouragement in their Power, particularly by Subscriptions and Premiums, to the Improvement of Arts and Manufactures in America.”

Here, long before the United States existed, Washington was expressing the same vision that we see expanded upon almost two decades later in Hamilton’s Report on Manufactures. Washington never gave up that vision, and he and Hamilton understood that the union they had created could only flourish if their perspective was adopted.

Article 17 of those same Fairfax Resolves read: “Resolved that it is the Opinion of this Meeting, that during our present Difficulties and Distress, no Slaves ought to be imported into any of the British Colonies on this Continent; and we take this Opportunity of declaring our most earnest Wishes to see an entire Stop for ever put to such a wicked cruel and unnatural Trade.” 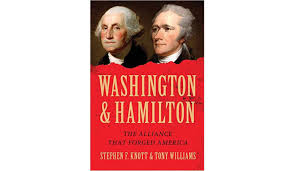 To those who object that Washington continued to hold slaves, they should additionally note that he was working to establish an economic system which would eliminate that evil; that he freed all his slaves in his will (although not his wife’s); and that from 1778 on, he refused to break up families no matter what the financial cost. According to his own testimony, he wrestled with the issue, but did not see how to eliminate slavery while keeping the country together. He knew that it had to go. In 1797, Washington is reported to have told a British guest: “I can clearly foresee that nothing but the rooting out of slavery can perpetuate the existence of our union, by consolidating it in a common bond of principle.”[41]

Indeed, more than 70 years before Abraham Lincoln, leading American founders understood that the United States could not exist half-slave and half-free. Hamilton and Washington pursued the establishment of an economic system which would supplant the slave system—and created the foundations and inspiration for statesmen such as Abraham Lincoln to actually do so.