July 24, 2018—It’s rare for any major U.S. publication to tell the truth about economic policy these days, but on July 22, the Huffington Post published an article that did just that. Author Zach Carter draws on a number of crucial examples, from the British Empire to the Clinton Administration, to excoriate free trade. “What economists are accustomed to describing as free trade’ orglobalization’ has another, less flattering name: colonialism,” Carter writes.  He is right on the mark. 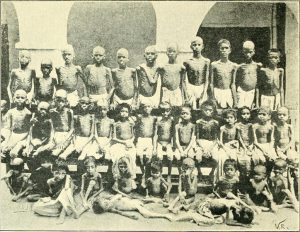 A picture of British colonialism in India.

The most poignant example to today’s audience is that of Clinton Administration policy on the AIDS question. Carter correctly details the way in which the United States attempted to bludgeon South Africa (and India) into abandoning their government’s policies of providing cheap AIDS drugs in the face of the devastating epidemic of that disease, all in the name of protecting “free trade” for the pharmaceutical companies in the United States. The results would be mass murder.

In this instance, the Clinton Administration was forced to back down, at least in part.  The British Empire’s free trade policy was more successful in crushing a huge portion of the planet to its will; just look at the results in 19th Century India, and Africa. Contrary to today’s mantra that “free trade means democracy,” Carter argues, that policy has meant enforced misery, even slavery, for billions of people. Freedom for the “markets” has had deadly results, including for huge pockets of the United States that were deindustrialized through the free trade mania of recent decades.

The glaring omission in Carter’s article is any reference to the American System of Economy, historically the leading force of opposition to British free trade. Alexander Hamilton, Mathew Carey, Henry Carey, and Friedrich List, for example, were all ardent opponents of these British colonial policies. Henry Carey, President Lincoln’s chief economic adviser, exposed the hypocrisy ruthlessly.

But these economists also put forward an alternative system, based on providing government support for building up industry, technology, and protection for working people. Presidents Washington, John Quincy Adams, and Lincoln all pursued their policies, successfully (over time) building the United States into the world’s most productive economy.

Zach Carter may be unaware of the history of the American System, but the American public cannot afford to be ignorant.  Americansystemnow.com was created to help Americans finally understand that history. Clearly its mission is more important than ever.