Dec. 12, 2018—Tomorrow is the anniversary of Alexander Hamilton’s Second Report of Public Credit, also known as the Report on the National Bank, to the U.S. Congress in 1790. This bold proposal, which called for establishing a government-backed, but privately-run national banking institution, touched off a huge political war which Hamilton eventually won.  Indeed, despite devastating setbacks, the principles of his banking system have been repeatedly reincarnated by the most successful American Presidents, and are responsible for the periods of the greatest progress in our history.

It is long past time that these principles were revived again today. 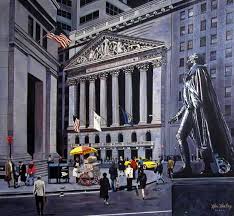 The United States has two banking traditions which have warred with each other from Hamilton’s period forward. Hamilton’s system provided for government backing and regulation for a national institution dedicated to creating credit for industry, agriculture, and commerce—building the physical economy of the nation. Under such a system, money per se is the servant of the process of investing in the productive powers of the economy, of creating scientific and technological progress. Government-backed credit is used to create leaps in productivity, which have raised living standards, built infrastructure, and revolutionized production.

In his Report, Hamilton explicitly argues that the intrinsic wealth of the nation depends upon the quantity and quality of its labor and industry, not gold and silver, or other substitutes for money.

But from almost the very beginning, the United States has been home to another banking tradition, one associated today with the name of Wall Street today. The best early example of this tradition can be seen in Aaron Burr’s creation of the Bank of Manhattan in 1799. Having been chartered by the New York State legislature to fund the erection of a new water system for disease-stricken New York City, the Bank of Manhattan immediately dropped that project in order to become a financial pool for speculation by financiers who aimed, among other things, to destroy Hamilton’s Bank of the United States.

In an 1801 letter to Sen. James Bayard during the Congressional stalemate between Burr and Thomas Jefferson for the Presidency, Hamilton described the incident this way:

He [Burr] has lately by a trick established a bank, a perfect monster in its principles, but a very convenient instrument of profit and influence. [emphasis added]

Under the Burr-Wall Street model which we predominantly experience today, banks do not provide credit for urgently needed infrastructure, but serve as instruments for amassing profits for the few, and proceed to loot the many.

What would restoring a Hamiltonian banking system look like today? The best model in circulation is the proposal for a National Infrastructure Bank which you can find on this website.  Like Hamilton’s bank, it would be supported by Federal bonds, and be dedicated to providing credit for development of the nation’s physical economy. When combined with a restoration of the regulations which would eliminate Federal government support for the speculative banks (Glass-Steagall), the creation of such a Hamiltonian bank would revolutionize the economy of the United States by providing trillions of dollars for building maglev trains, advanced nuclear power plants, and upgraded water infrastructure.

A slide show detailing how this NIB would work is available on this blog.