March 25, 2018—Groups dependent upon the extensive inland waterway system of the United States are celebrating their good fortune, in the wake of the Congress’s latest appropriations bill. For example, the Waterways Council, in a March 22 release, exulted at the fact that funding for the Army Corps of Engineers’ Civil Works division will be at the record level of $6.83 billion for FY18. The budget level will allow the Corps to go ahead with desperately needed construction, operations, and maintenance at the dams, harbors, and waterways for which it has responsibility. 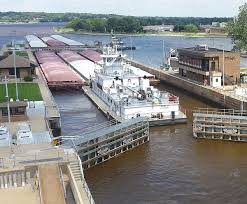 Lock on the Mississippi River. (wikipedia)

The problem is, according to the Army Corps itself, the minimum budget required for bringing the nation’s levees, dams, and ports up to a workable, safe condition is $162 billion dollars for 10 years—or $10 billion a year more than this year’s allocation.

It is insane, of course, that something as important as the navigation system of the nation (on which huge amounts of vital raw materials travel for export and internal use) depends upon yearly Congressional appropriations, rather than a capital budget, or other long-term funding. Equally ridiculous is that the country is seeking to repair infrastructure that is often 70 years old, rather than build for the future with modern technology.

Take a look at the system of levees, locks, and dams in the Mississippi River Basin, for example, which was recently the subject of a major article in the Washington Post. Nearly 30 locks and dams struggle to control the river in its upper area, above where the Ohio River joins it at Cairo, Illinois. These locks and dams are intended to facilitate barge traffic; barges move 300 million tons of goods a year down the Mississippi, and are much more efficient as a means of transport than trucks or rail.

The problems are that: 1) the locks are old and often break, including on feeder rivers such as the Ohio, thus holding up traffic for days or weeks;  2) the locks are too short for modern barge lengths, and thus barges have to waste time breaking down, and being put back together to get through; and 3) the full system of river control that was conceived in the 1930s and 40s, when the Lower Mississippi network of levees, locks, and dams was put into effect, was never completed in the Upper Mississippi. This includes the Pick-Sloan Plan for the Missouri River Basin, which was only partially completed.

The final problem is the abandonment of the American System approach toward controlling nature for the benefit of civilization, in favor of a so-called “sustainable” approach which increasingly seeks to let “Mother Nature” do her thing without interference. The Army Corps has now been mandated to return various areas to wetlands, remove dams, and let rivers run wild. The cited Washington Post article reflected that view by quoting one professor on the question of controlling deadly flooding along the Mississippi: “It’s like fighting the moon,” hydrogeologist Robert Criss said; “it’s stupid to fight.”