The Fight Behind the Declaration

July 1, 2019–Put yourself, in your mind’s eye, back in June of 1776, specifically, the period between June 7 and July 1. It is precisely at that time that one of the most crucial political battles in the history of the American republic was fought—the battle over whether we would, as 13 united colonies, declare our independence to the world. Without that bold step—which put every outspoken leader, national or local, at risk of torture or death—the United States of America would never have been born. 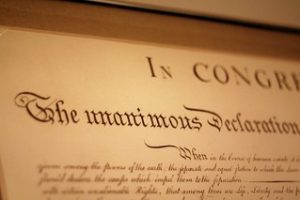 Yet the chief leaders of the American Revolution had a serious problem.  Despite the broad support for Boston against British depredations, a large portion of the colonists–the standard estimates range around one-third–were by no means ready to break with the mother country. Indeed, many even blamed the “radical” Sons of Liberty and other “rabble-rousers” for the troubles with England, even though King George had rejected Congress’s 1775 Olive Branch petition without even reading it. Many people wanted to stay out of politics, let things quiet down, make a deal.

What was to be done?  Bold leadership was required.

Start from the fact that the decision to issue a Declaration of Independence was a strategic question, not a matter of stating or mustering “public opinion.” By June of 1776, the British had been waging a shooting war against the colonies, starting with Massachusetts, for over a year. Declarations from King George himself had made it clear to leaders like John Adams and George Washington that the Crown was determined to impose total rule over its American subjects—a threat the patriots appropriately called slavery. The military force assembled by the Americans, under the leadership of George Washington, had brilliantly outwitted the British Army in Boston, driving it from the town, but tens of thousands of well-trained British and Hessian regulars, were headed for New York City, with the clear intent of splitting the continent in two.

The core of the leadership of the Colonies, most of which was sitting in the Second Continental Congress in Philadelphia, faced a crucial decision point. These leaders, including Benjamin Franklin and John Adams, had been briefed by General Washington in late May on the situation in New York City, where the prospects of an American victory looked poor. It was their firm conviction that durable military success would require the active support of Britain’s historic enemies, the French and the Spanish. But there was no chance of winning such support without a Declaration of Independence of the unified states—and even then, the necessary international aid was not guaranteed.

On the other side, however, the Revolutionary leadership, especially Franklin, Washington, and Adams, knew that a declaration, which would escalate the war, had to be backed by a large portion of the population. New layers of the population would have to be organized to provide the necessary support for the leadership that could win the war.

Resolution on the Table

It was Friday, June 7, when Richard Henry Lee, a delegate to the Second Continental Congress from Virginia, presented his resolution calling for a declaration of independence. He took this action with the mandate of a Virginia Convention that had taken place on May 15. The resolution was terse.

Resolved, That these United Colonies are, and of right ought to be, free and independent States, that they are absolved from all allegiance to the British Crown, and that all political connection between them and the State of Great Britain is, and ought to be, totally dissolved.

“That it is expedient forthwith to take the most effectual measures for forming foreign Alliances.

“That a plan of confederation be prepared and transmitted to the respective Colonies for their consideration and approbation.

“Resolved, That the consideration of them be referred till tomorrow morning; and, that the members be enjoined to attend punctually at 10 o’clock….

On the next day, Lee’s resolution met a divided response. In open support were six additional states: North Carolina, Rhode Island, Massachusetts (whose delegate John Adams had seconded the resolution), New Hampshire, Connecticut, and Georgia. The rest were uncommitted or opposed, believing such action “premature.” But the leadership of the Convention knew it would never do to pass the resolution with a mere 7-6 majority. The states of New York, New Jersey, Pennsylvania, Delaware, Maryland, and South Carolina—some of the largest in the nation-to-be—had to be brought along.

A decision was made to delay the vote for three weeks, while the pro-independence leadership mobilized popular support to ensure that unanimity for independence was achieved. The “voice of the people” must be heard, was the sentiment even of opponents, such as Edward Rutledge of South Carolina. At the same time, anticipating success, the Congress on June 11 appointed a committee of five to prepare a draft Declaration of Independence, which committee included Thomas Jefferson, Ben Franklin, John Adams, Robert R. Livingston, and Roger Sherman.[1]

There was no question but that support for independence was uneven throughout the Colonies. Strongest in favor were the New England states, with their strong republican tradition, and experience of British military oppression; and some of the Southern states, led by Virginia, which had also been victims of armed assault. The fact that America’s foremost military figure, George Washington, strongly supported independence also played a crucial role in Virginia’s stance.

The mid-Atlantic states were more divided, especially the crucially important Pennsylvania and New York. Many of the elites, and ordinary people as well, were not prepared to abandon loyalty to “tradition” and established authority. Ideals of freedom and developing a prosperous nation were all very well and good, but they had families to feed, business to attend to, pressing matters of daily life.

There had been a national mobilization underway against such arguments since early 1776, as revolutionary leaders sought to counter British blandishments to the Loyalists. Among the most thorough was Alexander Hamilton’s 1775 reply to the Tory Samuel Sewall in New York state, A Farmer Refuted, in which he ripped apart Sewall’s lies that sticking with the British system of being a colony supplying raw materials to the mother country, and remaining in dependence for manufactures, was to the benefit of the farmers.

One of Franklin’s many imported revolutionaries, Thomas Paine, had electrified the nation with his Common Sense pamphlet, which was published in January, and which set forth unequivocal arguments for separation from Great Britain. Estimates of the 90-page pamphlet’s circulation range from 120,000 to 500,000, within a population estimated to have been 2.5 million (including slaves).

In March the North Carolina legislature became the first to call for independence. By mid-May, seven others had joined it.

Over the course of that six-month period, and even before, all the colonies had undergone some sort of popular upheaval in their governments, with Crown governors ousted or ignored, and legislative bodies replaced or nullified. Local political associations, such as Committees of Safety, sprang up around local leaders, in a continuation of the process of the Committees of Correspondence which had formed in the early 1770s. Thousands of patriots participated, discussing political ideas as well as mobilizing support against political, and physical, atrocities. There were many divisions, but even in more conservative regions such as New York City, the revolutionary demand for freedom from the Crown was winning out.

It was this political infrastructure that the Revolutionary leaders set out to mobilize when the Congress set the deadline of July 1 for reconsidering Richard Henry Lee’s resolution of independence. In some of the originally resisting states the conversion to support was easy; in others it was not. In many cases, the revolutionaries had to mobilize those generally staying outside of politics to challenge the established political institutions, and call special conventions which would support the necessary action.

For example, in New Jersey, the legislature decided on June 15 to arrest Royal Governor William Franklin, and to order their delegates to the Congress to vote for independence. In Maryland, pro-independence leaders, led by Samuel Chase, expelled their proprietary governor, and called on the counties to hold emergency conventions on the question—with the result that they voted for independence, and overrode the Provincial Convention in an emergency session June 28.

In the cases of Pennsylvania and New York, however, the fight was more difficult. In divided Pennsylvania, conventions were held in every county, which elected a new statewide body which declared for independence. Militia battalions (Pennsylvania had already raised eight rifle companies for the Continental Army) raised the cry for independence, calling on the formal legislature to be overridden. While Continental Congress delegates Ben Franklin, James Wilson, and John Morton were in favor of independence, the other four delegates were not. Yet, delegates Robert Morris and John Dickinson decided to respect the popular will insofar as they would not vote against it; their abstention permitted Pennsylvania to vote in favor.

In New York, the “General Committee of Mechanicks, in union,” among others, urged the state’s delegates to the Continental Congress to vote for independence.

Consent of the Governed

Meanwhile, back in Congress, Thomas Jefferson had produced his draft Declaration, which had been reviewed and revised. On June 28th, it was read and debated in Congress as a whole. More revisions were demanded and made, including the crucial decision to omit Jefferson’s attack on King George for enforcing slavery on the Colonies.

When the Congress once again took up the issue on July 2, the leadership engaged in a full nine hours of debate. Leading the forces for independence was John Adams, who had long advocated separation, and was intimately involved in the organization of the colonies for war. Leading the other side was Pennsylvania’s John Dickinson, who argued at length that a Declaration of Independence would be “to brave the storm in a skiff made of paper.” Even at the end of the discussion, four states were still not on board—New York, Pennsylvania, South Carolina, and Delaware.

But, when matters came to a vote again on July 2, every state but Pennsylvania had gotten the message from the people, to support the national call for independence. A decision by two Pennsylvania delegates to abstain led to the vote going through, 12 for, 1 abstention (New York)[2], none opposed. John Adams accurately described the process in a letter to his wife:

“Time has been given for the whole people maturely to consider the great question of independence, and to ripen their judgment, dissipate their fears, and allure their hopes, by discussing it in newspapers and pamphlets, by debating it in assemblies, conventions, committee of safety and inspection, in town and county, meetings, as well as in private conversation, so that the whole people, in every colony of the thirteen, have now adopted it as their own act.”

The Revolutionary leadership of the nation had mobilized the people to give their consent to the action that had to be taken, for the population to survive and prosper as a free nation. The principles outlined in the formal Declaration of Independence, whose final text was voted up on July 4, had thus already been begun to be put into effect, and the fight to establish a nation committed to the inalienable rights to Life, Liberty, and the Pursuit of Happiness was underway.

[1] Two other committees were established as well, one to draft treaties to be proposed to foreign powers, and another to draft a constitution for the new confederation of independent states.

[2] New York signed on July 9, after a special convention had been held.