The Fed is Lying: Glass-Steagall Is a Necessity Now

—From the movie Casablanca“

July 4, 2017—The Federal Reserve put out the word on June 26, claiming that all the major banks in the United States had passed their “stress tests,” and thus demonstrated that they could weather a severe financial crisis. Fed Chairman Janet Yellen added, in remarks in London, that she believes “we will not have another banking crisis in my lifetime.” In response, the Big Six financial behemoths in the United States—JPMorgan Chase, Wells Fargo, Citigroup, Goldman Sachs, Bank of America, and Morgan Stanley–are free to pour their profits into dividends, and pump up the financial bubble by buying back tens of billions of dollars’ worth of their own stock.

Look like the stock market board? That’s no coincidence. (wikipedia)

The banking pundits are ecstatic. “Who needs regulation? Who needs Glass-Steagall?,” they sneer. “We are financially healthy.”

Meanwhile, legislation mandating the return to Glass-Steagall banking separation, the first step in returning to an American System of Economics and creating a recovery, remains stalled in the House (H.R. 790, H.R. 2585) and Senate (S. 881).  (H.R. 790 has 53 sponsors, and the other legislation has nine.) This is despite the fact that Memorials demanding Glass-Steagall have been introduced into 17 state legislatures, and broad bipartisan support for its return clearly exists.

It doesn’t take an American System economist to expose the fact that this so-called “financial health” doesn’t translate into the health of the economy. While the banks may have auditable positive book balances, that money is not translating into improvements in living standards, infrastructure, or social health around the United States. These banks are not serving as “nurseries of national wealth,” as Alexander Hamilton prescribed, but as predators on a dying host.

But, in fact, the official results belie the fact that there is any financial health at all. Even the New York Times, in a major editorial July 3, points out that if international accounting standards were applied, as opposed to those used by the Fed, the 14% capital-to-assets ratio would become 6.3%. And this doesn’t even take into account the banks’ huge liabilities (counted as assets) known as derivatives, which have a notional value in the hundreds of trillions of dollars, and thus an equivalent amount of potential losses.

Just to give you an idea: According to the Fed Quarterly Report on Bank Trading and Derivatives Activity of December 2016, the commercial banks JPMorgan Chase, Citibank, and Bank of America alone hold $47.5 trillion, $43.9 trillion, and $21.1 trillion in notional derivatives (gambling bets on trades of various sorts) respectively. Should there be a failure anywhere along the line of the totally interlocking debt structure internationally, it could create an unstoppable panic. (For fuller coverage, see Pam and Russ Martens’ Wall Street on Parade ) 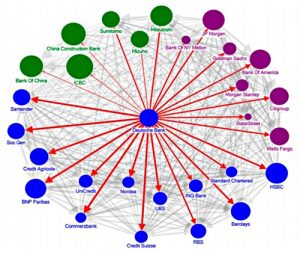 Systemic Risk Among Deutsche Bank and Global Systemically Important Banks (Source: IMF — “The blue, purple and green nodes denote European, US and Asian banks, respectively. The thickness of the arrows capture total linkages (both inward and outward), and the arrow captures the direction of net spillover. The size of the nodes reflects asset size.”)

Note that at present, these banks are permitted to use depositors’ money to do their gambling, and are backed up by the Federal Reserve. The re-institution of Glass-Steagall would stop this gambling, and this threat to the system, in its tracks.  In other words, Glass-Steagall is an immediate necessity for dealing with a threatened explosion of the derivatives bubble, and other speculative bubbles now threatening to implode. Among them is the bubble in commercial debt, which has already seen a dangerous increase in failures over the last several months. (For fuller coverage, see Nomi Prins’ “My Political-Financial Road Map for 2017” )

Equally important, however, is the fact that Glass-Steagall’s re-imposition would open the door toward urgently required investment in the real economy. Gambling debts have to be taken off the books of the banks (and the Fed as well!), in order to make them viable conduits for new Federal credit to be poured into the economy. Massive investments in new generations of basic economic infrastructure—transportation, energy production, water management, and health care, to start—are desperately needed in order to boost the productive powers of labor in the U.S. economy. Without that boost in productivity, it will actually be impossible to simply “redistribute the wealth” in order to meet the needs of an increasing desperate and despairing U.S. population.

As the American System school of political economy stresses, an economy is not based on money, but on the constant increase in the productive powers of labor, translated into upgrades in technology and increased population potential. Banking institutions have been instituted to mediate the credit for accomplishing that societal objective—and it is the obligation of government to ensure they do. Alexander Hamilton, Henry Carey, and Lyndon LaRouche have all outlined the theoretical basis for this—and John Quincy Adams, Abraham Lincoln, and FDR have demonstrated brilliantly how it works. The lessons are there to be learned.