The FDR Model: The “Golden Age” of Productivity

June 26, 2017—Talk about the desperate need for an upgrade of the basic infrastructure of the U.S. economy is all the rage these days, from President Trump to the New York State officials staring a transportation disaster in the face. The unfortunate reality is that, despite the fact that many competent professionals are working up plans, none of the political leaders seem to understand on what principles the necessary infrastructure drive must be based.

The first step toward that drive, or any recovery at all, as Rep. Marcy Kaptur (D-OH) pointed out in her June 6 presentation to the House Rules Committee, has to be to reinstitute the separation between commercial and investment (speculative) banking—Glass-Steagall. There’s a reason FDR carried out that crucial banking reform early in his Administration; along with the audit that the Fed carried out during the Bank Holiday, it was absolutely necessary to preparing the groundwork for any productive investment.

The second prerequisite is to understand what kinds of investments are necessary to creating a true economic recovery. Short-term patches will be necessary, but they won’t do the job. What is needed are Great Projects that revolutionize the economy technologically and economically: the kind of Great Projects that the United States last saw under the Franklin Roosevelt presidency, and the space initiative of President Kennedy. It is only these big infrastructure projects which will create a qualitative leap in the productivity of the economy, most especially the productive powers of labor.

Thirdly, there is the question of how to fund such long-range, expensive projects. The current public-private partnership model, geared as it is to provide short-term profits for private firms, is not only inadequate; it is a total rip-off which will further degrade the real economy. In a future article, I will call upon a classic example from New York City—the New York City subway system—to underscore the point. What’s needed is an institutional source of long-term, low-interest Federal credit, in the form of an infrastructure bank or institution like FDR’s Reconstruction Finance Corporation, to fund the needed transformation.

The Question of Productivity

Let’s deal first with the question of creating productivity in the economy once again, point two.

It is well known among financial professionals that the U.S. economy is not just suffering from low economic growth (as reflected in GDP), but also from the very

Growth in Multi-Factor Productivity (MFP) and Real GDP Per Capita 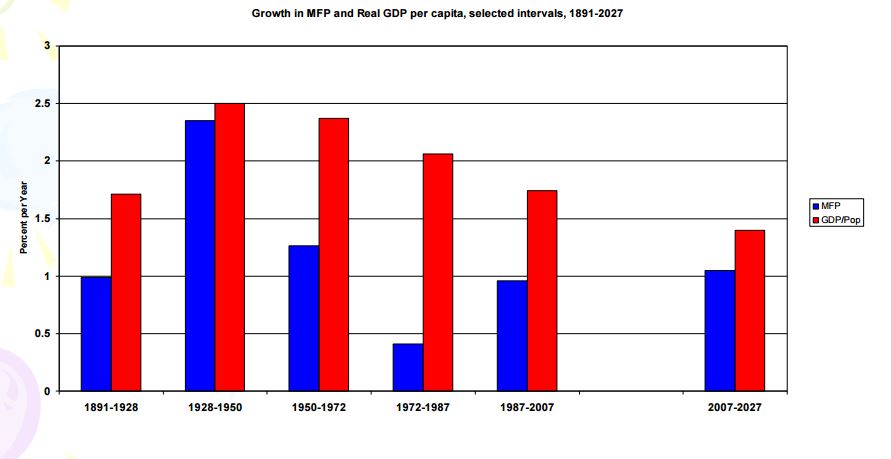 Blue is MFP, red is GDP.

low rate of growth in productivity. Today, what the National Bureau of Economics Research (NBER) calls total factor productivity for the U.S. economy is calculated to be 1 %. And as of late 2014, the related measure of total capital investment showed growth in the United States at less than 4 percent (The Chinese economy was growing at a 16% rate per year by the way.).

As the founder of the American System of Political Economy Alexander Hamilton repeatedly emphasized, it is the growth in the productive powers of labor which provides the source of wealth, and therefore capability for the increase in standard of living at present and in the future, for an economy. Contrary to most economists today, who count productivity as increasing the intensity of labor per unit capital (what was called speed-up in the old days), real productivity depends upon investments and upgrades in not only employment, but capital equipment (especially machine tools), and basic economic infrastructure.

We concentrate here on the crucial role of infrastructure, which determines the potential for any productive enterprise to grow. What’s the use of a factory, or farm, if you have no water, no road to get produce here and there, no electricity for advanced equipment, or no educated workforce? All of these things are provided by man-made improvements in nature—which is what we call infrastructure, and the early American System economists called “internal improvements.”

Thus you may be shocked to learn that the “golden age” of productivity of the U.S. economy in the 20th Century was none other than the 1930s, the period of the Presidency of Franklin D. Roosevelt! Over that decade, total factor productivity increased at an annual rate of 3.3% (“Sources of TFP Growth in the Golden Age,” National Bureau of Economics Research, 2005)

The NBER attributes this rate of growth under FDR as “due to the very strong growth in electric power generation and distribution, transportation, communications, civil and structural engineering for bridges, tunnels, dams, highways, railroads, and transmission system: and private research and development.” That is, basic economic infrastructure. 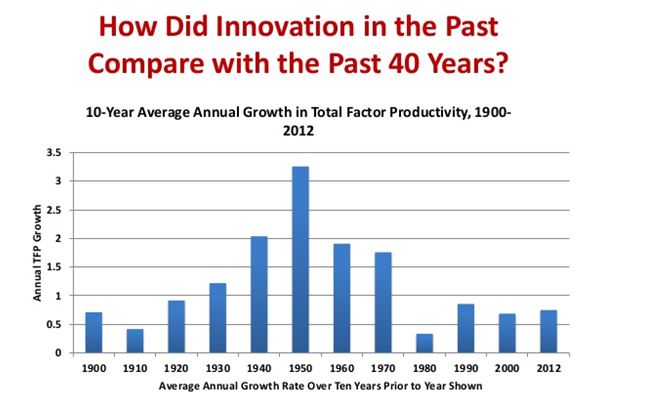 The impact of FDR’s infrastructure investment did not end with the New Deal. According to a Congressional Budget Office study on Total Factor Productivity, the 1940s as a whole saw about a 2.5% rate of growth, not to mention a 5.3 year increase in life expectancy. Growth in TFP levels continued above 2% in the 1950s and until the end of the 1960s, with a boost in the Kennedy years. Economists like David Aschauer (1989) have attributed the subsequent decline, after 1969, to the decline in public infrastructure spending.

By his own declaration, FDR’s primary objective to deal with the hideous suffering in the country when he took office in 1933, was to put people back to work. Neither he, nor his chief lieutenant Harry Hopkins, wanted to rely on “relief” or handouts; they understood the importance of working for a living as a source of human dignity. However, unlike what you learn in the parody of John Maynard Keynes, not just any old job would do. The jobs which FDR created were heavily vectored toward productive purposes which would boost the productivity of the economy as a whole, specifically, infrastructure.

We can only outline the contours here. Most prominent, of course, were the major projects outlined by FDR in his Sept. 21, 1932, campaign speech in Portland, Oregon , which was devoted to the question of increasing the accessibility of electrical power as a key driver of the economy. He outlined four major projects which the Federal government should take responsibility for: 1) the Boulder Dam (later Hoover); 2) two Colombia River dams (Grand Coulee and Bonneville); 3) the St. Lawrence Seaway; and 4) the Tennessee Valley Authority Project. All of these projects but the St. Lawrence Seaway were completed during his presidency, and vastly increased the accessibility and affordability of electricity to industry and households. Both led to a drastic increase in productivity of labor.

The Tennessee Valley Authority was paradigmatic. It went far beyond mere water management and power production, transforming a virtually Third World region of the United States into a region for prosperous agriculture and industry, some of which became absolutely vital in the economic mobilization for World War II. It was not accidental that the atom-splitting Manhattan Project was located in the confines of the infrastructure-rich Tennessee Valley Authority.

The Watts Bar dam on the Tennessee River, built from 1939 to 1942, provided urgently needed electricity for the World War II effort. (TVA.org)

These major projects were supplemented by the ones funded by the programs of Civil Works Administration and the Public Works Administration, which were much more short-term. While these programs are often condemned as “make-work,” they were nothing of the sort. They carried out a total of 45,000 projects between 1933 and 1939 alone, building bridges, tunnels, sewage treatment plants, hospitals, playgrounds, and tens of thousands of schools. (See “Then and Now: Why Roosevelt’s Explosive 1933-45 Recovery Worked.” ) All of these contributed materially to increasing the productive powers of labor.

Not to be overlooked as well is the creation of the Rural Electrification Administration, which funded cooperatives throughout the country with low-cost loans, and dramatically increased the access to electricity in rural America from 10% in 1936, to 90% by 1950.

Look around. We are still living on much of the infrastructure that FDR created in the 1930s and 1940s—and that’s a major source of our low productivity. The horrors of our urban water supplies—of which Flint’s lead-poisoning scandal is only one example–should be enough to make the point. The American System of FDR and Hamilton must be urgently studied today.