The Declaration, Through Lincoln’s Eyes

July 4, 2019—There was perhaps no more ardent supporter of the Declaration of Independence than Abraham Lincoln. He saw the Declaration as the moral foundation of the nation, upon which the Constitution was based. Thus, no matter how much the United States population fell short of its ideals, the moral commitment to the proposition that “all men are created equal, that they are endowed by their Creator with certain unalienable Rights, that among these are Life, Liberty, and the pursuit of Happiness” represented the standard for the nation. It was a positive commitment upon which a “more perfect Union” had to be built, and a unique accomplishment for mankind. 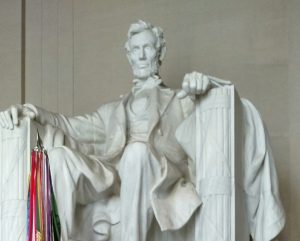 The Lincoln Memorial in Washington, D.C.

Lincoln’s view, expressed in innumerable speeches, was not always the prevalent one. By no later than the late 1780s, the anti-Constitutional party was citing the Declaration as the basis for resisting the formation of an energetic Federal government. By Lincoln’s time, it got even worse, as secessionists insisted that the Declaration represented a justification for their actions against the Union created by the Constitution. In the 20th Century, a whole school of history was built upon the argument that the Constitution was a “counter-revolution” against the assertion of individual rights formulated in the Declaration.

Today, the cynicism goes even further, as many argue that the very existence and toleration of slavery made a mockery of the Declaration’s ideals. Lincoln, who hated slavery, was certainly familiar with this argument. He emphatically disagreed.

Of the many speeches Lincoln gave on the subject, his oration in Lewiston, Illinois in 1858 stands out to me. This speech preceded the Lincoln-Douglas debates, which began a few days later. The crucial passage reads as follows:

The Declaration of Independence was formed by the representatives of American liberty from thirteen States of the confederacy—twelve of which were slaveholding communities. We need not discuss the way or the reason of their becoming slaveholding communities. It is sufficient for our purpose that all of them greatly deplored the evil and that they placed a provision in the Constitution which they supposed would gradually remove the disease by cutting off its source. This was the abolition of the slave trade. So general was conviction—the public determination—to abolish the African slave trade, that the provision which I have referred to as being placed in the Constitution, declared that it should not be abolished prior to the year 1808. A constitutional provision was necessary to prevent the people, through Congress, from putting a stop to the traffic immediately at the close of the war.

Now, if slavery had been a good thing, would the Fathers of the Republic have taken a step calculated to diminish its beneficent influences among themselves, and snatch the boon wholly from their posterity? These communities, by their representatives in old Independence Hall, said to the whole world of men: “We hold these truths to be self evident: that all men are created equal; that they are endowed by their Creator with certain unalienable rights; that among these are life, liberty and the pursuit of happiness.” This was their majestic interpretation of the economy of the Universe. This was their lofty, and wise, and noble understanding of the justice of the Creator to His creatures. Yes, gentlemen, to all His creatures, to the whole great family of man.

In their enlightened belief, nothing stamped with the Divine image and likeness was sent into the world to be trodden on, and degraded, and imbruted by its fellows. They grasped not only the whole race of man then living, but they reached forward and seized upon the farthest posterity. They erected a beacon to guide their children and their children’s children, and the countless myriads who should inhabit the earth in other ages. Wise statesmen as they were, they knew the tendency of prosperity to breed tyrants, and so they established these great self-evident truths, that when in the distant future some man, some faction, some interest, should set up the doctrine that none but rich men, or none but white men, were entitled to life, liberty and the pursuit of happiness, their posterity might look up again to the Declaration of Independence and take courage to renew the battle which their fathers began—so that truth, and justice, and mercy, and all the humane and Christian virtues might not be extinguished from the land; so that no man would hereafter dare to limit and circumscribe the great principles on which the temple of liberty was being built.

Now, my countrymen, if you have been taught doctrines conflicting with the great landmarks of the Declaration of Independence; if you have listened to suggestions which would take away from its grandeur, and mutilate the fair symmetry of its proportions; if you have been inclined to believe that all men are not created equal in those inalienable rights enumerated by our chart of liberty, let me entreat you to come back. Return to the fountain whose waters spring close by the blood of the Revolution. Think nothing of me—take no thought for the political fate of any man whomsoever—but come back to the truths that are in the Declaration of Independence.

You may do anything with me you choose, if you will but heed these sacred principles. You may not only defeat me for the Senate, but you may take me and put me to death. While pretending no indifference to earthly honors, I do claim to be actuated in this contest by something higher than an anxiety for office. I charge you to drop every paltry and insignificant thought for any man’s success. It is nothing; I am nothing; Judge Douglas is nothing. But do not destroy that immortal emblem of Humanity, the Declaration of American Independence.

Much more could be said.  Indeed, nearly all Lincoln’s speeches in the Lincoln-Douglas debates, and the presidential campaign that follows, concerned the meaning of the Declaration.  He insisted, over and over again, that that document included all people, including the black man. The fact that measures to eliminate slavery had not succeeded did not lessen that truth: the Declaration had set the standard, the beacon, which had to be followed.

As for the Constitution, Lincoln saw that as the means of practically implementing the Declaration’s ideals. In both documents, the core concepts appear in their Preambles, and the two function as a whole. 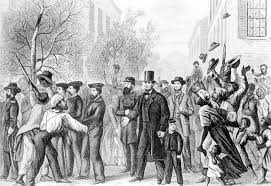 Lincoln welcomed by former slaves after the liberation of Richmond.

That the Constitution had to be amended to fulfill the moral commitment of the Declaration was obvious to Lincoln. Lincoln pointed out in a speech attacking the Dred Scott Supreme Court decision in Springfield, Illinois in 1857 that blacks in some colonies (five, to be exact[1]) had been among the voters who participated in the ratification process for the Constitution. Those voting rights were later taken away, but the commitment remained. Lincoln did his personal best to fulfill that charge, not only by winning the Civil War but by ensuring the passage of the 13th Amendment in the weeks before he was killed.

What differentiated Lincoln from many Americans who were outraged by slavery was that he embraced another aspect of the Founding generation’s approach, the American System of Economics. 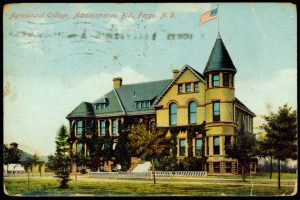 Lincoln gave new life to a Hamiltonian program of economic development which, if followed through, would have created the conditions for a successful reunification of the nation through economic progress. His re-establishment of national banking, funding of the Transcontinental Railroad, adoption of the protective tariffs, and establishment of the land-grant colleges and (scientifically minded) Agriculture Department—to mention only a few of his economic accomplishments–put the nation on the road to an explosion of productivity and prosperity.

It was a breakdown in the national leadership after his assassination that led to the failure of Reconstruction, and eventually the hideous backsliding into anti-black and anti-immigrant terror that gripped the country for the early decades of the 20th Century. The American System—and its core principles honoring the creative power of labor and the human mind–was abandoned, to our nation’s great dishonor.

I would assert that Lincoln’s commitment to the Declaration and his economic program were part of one and the same moral beacon, one he understood to be the very foundation of the nation. His thinking would seem to be equally relevant today.