The Cost of Infrastructure Decline–Opioid Deaths Among Hardhats

April 22, 2018–Sometimes there are unintended, even deadly, consequences in neglecting basic infrastructure.  This is one of those times.  Not only is America’s once prided infrastructure crumbling to the ground, but the workforce most responsible for building that infrastructure is facing dire conditions. This reality was exposed during the annual conference of NABTU (North America’s Building Trades Unions) held last week in Washington, D.C. In the course of an Opioid Task Force Workshop, a report by the MEPI (Midwest Economic Policy Institute) dramatized the fact that construction workers are being disproportionately hit by the opioid crisis.

This additional dimension to the opioid crisis, which is devastating every section of the nation and population, further drives home the need for a radical national solution, namely a reversal of the last 40 years of post-industrial demoralization and economic decline with the kinds of inspiring national missions represented by the Apollo Space Program and the Marshall Plan.

“In 2016, construction workers in Ohio were 7.24 times more likely to die of an opioid overdose than other workers.”  They attribute this to the jobs being more physically demanding and dangerous.  The injury rate is 77% higher than the national average.”

An estimated “15% of construction workers have a substance abuse disorder, compared to the national average of 8.6%.”

The report cites that “In recent years, most workers compensation claims have involved opioid prescriptions as 60-80% in Midwestern States.”

“Opioids account for about 20% of all total spending on prescription drugs in construction industry (5-10% higher than other industries).”

Estimates based on available data state that, “Nearly 1,000 construction workers across the US Midwest died from an opioid overdose in 2015, with Ohio (380 deaths), Illinois (164 deaths) and Michigan (160 deaths) at the top of the list.”

The Broader Scope of the Crisis

Without going through all the figures of the over-prescription of opioids and criminal policy toward narcotics that has led to the drug crisis, I will note the broader figures from the report.

“2.5 million Americans are addicted to opioids.  The United States has 5% of the world’s population, but it consumes 80% of the global opioid supply. … Four out of five heroin users started out using prescription pills.”

“An estimated 15 percent of construction workers have a substance abuse disorder, compared to the national average of 8.6 percent, according to the National Survey on Drug Use and Health by the National Safety Council (2017). Blue-collar construction and extraction, specifically, ‘have twice the [substance abuse disorder] rates of educators, professional, office and administrative support workers (NSC 2017).’” 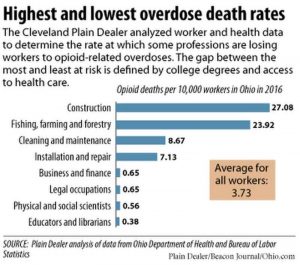 “Opioids also account for 20% of total spending on prescription drugs in construction industry, which is 5-10% higher than its share of spending in other industries.”

“It is estimated that employees pay $1 billion each week in worker’s compensation costs alone.  Employers tend to want employees to return to work as soon as possible to reduce these costs associated with injuries and illnesses . . . workers want to return to the job to maximize take home pay and benefits.  Therefore they get prescribed painkillers to get back to work.  One way workers have been able to return to work at a faster rate is by being prescribed painkillers.”

Due to the majority male presence in construction, “61% of those who misuse pain medication are male, 66% of them are also between the ages of 18-34.  Men are twice as likely to abuse prescription drugs, and they comprise 98% of all blue collar construction workers across the US.”

The Path to Rebuilding

The MEPI’s recommendations for dealing with this crisis are primarily directed to health insurance, drug testing, expanding treatment programs, and reversing the stigma associated with drug addicts. However, in view of the overall condition of the country’s economy, this prescription falls far short. A total turnaround in national outlook is required.

President of the NABTU Sean McGarvey himself has pointed to the direction of a solution. McGarvey announced at the AFL-CIO Conference last fall that the nation must have a $4 trillion infrastructure program to begin to meet the infrastructure collapse, including a “dedicated funding source.” The American Society of Civil Engineers (ASCE) backs that figure up with a $4.7 trillion estimate.  As no major investments in U.S. infrastructure have occurred in the last fifty years, their figures are definitely in the ballpark. 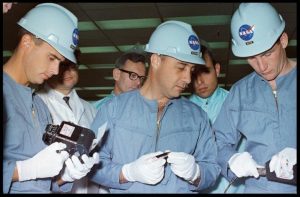 Construction workers in the Apollo program.

Despite this urgent demand, there is not much on the table, except a lot of talk.  A bill that was first filed 17 years ago by Congresswoman Rosa De Lauro offers $25 billion over 5 years. This is miniscule. Trump and mainstream Democrats are proposing $1.5 trillion over ten years, by taking money out of other programs.  The Progressive Caucus is proposing $2 trillion over ten years.  Not one of these proposals has a funding mechanism without adding to the deficit. Trump is talking about privatization while the Democrats want to rescind the tax cuts.  Neither proposal fits the bill.

As the American System Now has extensively detailed, there is only one alternative, and that is a Hamiltonian National Bank.  Every time in American history this model was used, the country made leaps in productivity. If the United States is to compete once again in state-of-the-art development in transportation, power, water, etc.. this is the answer. What are we waiting for?

Investigative journalist and author of Dreamland, Sam Quinones, testified in a U.S. Senate hearing in January, that the only long-term drug recovery program is reversing the last 40-50 years of free trade and globalization. He called for a program like a Marshall Plan or Kennedy Space Program to once again bring optimism and progress to the nation.  He made the insightful argument:  “Through our space program, we were inspired to spend years and dollars, bringing together smart people—all to achieve something no previous generation thought possible.”

When the Building Trades Apprentice Program, one of the best in the country, needs a defibrillator and Narcan standing by, just in case, you know that something is deeply wrong.  It’s time to break the stigma that blue collar jobs are dirty and degrading.    Let’s do this, while we still have the man power and brainpower to get the job done.