The BookExpo Was a Step Forward

Thanks to your support, the potential for a leap in circulation of Hamilton Versus Wall Street has significantly increased. My five days in New York City at BookExpo America 2019  (for publishers and professionals) and BookCon (for the public) gave me and my book a big boost, the results of which will be felt in the weeks and months to come.

Over the course of the events, my Authors Press sponsors distributed my 500 leaflets introducing the book, and more than 150 book-cards. Some of these went to people with whom I had substantive conversations about Hamilton’s policies, and how they were needed today. I had a goodly number of such conversations (sorry, I didn’t keep count), 14 of which resulted in book sales. I also had a complement of 11 books to be given away (provided by the sponsors), which went out quickly. 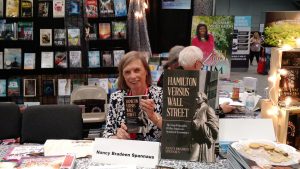 As you might imagine, Hamilton Versus Wall Street was quite a contrast to those which were being heavily promoted at both the wholesale and retail events. Posters featuring books of fantasy, magic, and sci-fi were hung throughout the huge Javits Center. During the BookCon, when the event was open to the public, the place swarmed with teenagers, many of whom were dressed in fantastical costumes depicting the creatures in those books.  I was too busy trying to find the serious people who would be interested in my book to take pictures that would dramatize this.

The second most popular genre was “self-help” books of all kinds, ranging from topics like “Beyond Grief,” to “Humanity 2.0.” These were stories of personal spiritual journeys, and “life-coach”-type books. Many people clearly are looking for the “small picture.”

But the good news is that the interest in Alexander Hamilton as a great founder is alive and well!  Many people were attracted by my poster (visible in the picture above) to come ask what it was about, especially during the BookCon.  Mothers with teenage children were often drawn to the sign, but they were not the only ones. One fellow took my book-cards to give to a group of his friends whom he described as “Hamilton groupies.”  Others came over to check it out because their spouse was a great Hamilton or economics fan.

The logistical crew at the booth where I was located did a video, as promised, which should be edited to be about six minutes, and sent to me for use as publicity in the near future.  The young man who asked the questions did a great job, zeroing in on the content rather than what it’s like to be an author.

I had numerous conversations which could lead to further publicity, and was, of course, regaled with the conventional “wisdom” about publishing. That includes the assertion that self-publishing is a loser, and that you have to get a Kirkus review in order to get your book anywhere, including libraries. While neither of these options is inconceivable to me, I refuse to see them as insurmountable problems.  Waiting for official approval is not my style.

As those of you who read my blog know, one of the highlights of this trip occurred outside the Expo—my unforgettable visit to Hamilton’s Grange. Besides the tour, I was also pursuing the potential for getting my book into the repertoire of the National Park Service Rangers at Hamilton sites, and maybe even sold in their bookstores. It’s a distinct possibility.

With this report, I am closing down the GoFundMe site.  I greatly appreciate the support you gave me. While I no longer will be asking for money, I do urge you to spread the word about the book to all, including policymakers; post reviews; call bookstores to create demand; donate copies to libraries; set up speaking events; and do anything else you can think of to expand circulation and debate about Hamilton Versus Wall Street. You can find me by email (nancyspannaus@comcast.net) or through my blog (https://americansystemnow.com). This country needs Hamilton’s ideas, and together we have an indispensable role to play.