April 29, 2018—The movement of teachers willing to strike for a change in policy toward public education continues to expand across the country. Arizona teachers, based on a vote in which 78% approved a strike, turned out en masse in the state capitol April 26 and 27, demanding that the legislature reverse its pro-Wall Street policies, and meet their demands for full funding for education.  On the same days, teachers in Colorado rallied in Denver to insist on an increase in education funding.

Teachers in both states report shocking shortages of supplies and unmanageable increases in class size in schools across their states. This reflects the fact that state legislatures have savaged education budgets since the 2007-2008 crisis, largely in the interest of tax cuts for the wealthy. The resulting low teacher salaries have led to a steady exodus from the profession, and thus a critical shortfall in the supply of teachers nationwide. 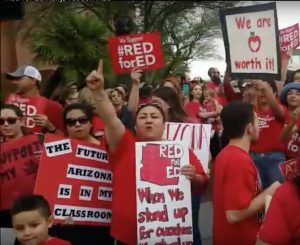 The governors and legislatures in both sides have not been forthcoming. The Arizona teachers have said they plan to continue their work action next week, insisting that the legislature go beyond its promised wage increase, to increase pay for school support staff, and return education funding overall to pre-2008 levels. While Colorado has increased its education budget, the teachers say it is not enough, and that the increases simply shift money around in the budget.

As in West Virginia and Oklahoma, the teachers generally are receiving palpable support from not only other unions, but the general public, which realizes they are taking action for the children and the common good. A recent national poll showed broad support for the teachers’ strikes, including among a majority of self-identified Republicans.

Particularly striking in terms of popular support for the teachers’ anti-Wall Street demands was the fact that the Republican-dominated Kentucky state legislature overrode its governor’s veto of a tax increase (on cigarettes and certain services) which had been demanded by the teachers there to support new school funding in the state budget.

Whether local victories succeed in the teachers’ broader aims, however, will depend upon the teachers joining up with others in the population for a change in national economic policy. Without a return to FDR-style policies of banking regulation (Glass-Steagall) and the creation of a source of long-term, cheap credit directed to modernizing the nation’s infrastructure (creating a National Infrastructure Bank), the education funding crisis can’t be solved.

The problem to be solved has been long in the making: the gutting of the U.S. productive economy. The shift over the past decades toward a lower-wage, post-industrial economy has predetermined a reduction in tax revenue. When the 2007-2008 blow-out occurred, trillions of dollars of paper values were wiped out, making the situation much worse. This was particularly the case for the value of real estate, which is a major source of income at the local level. As for the states budgets, which rely heavily on taxation on incomes and commerce, they were also hard hit by the collapse in employment and wealth.

The so-called recovery over the past decade would theoretically have resolved this problem, but it has not.  There’s been no recovery to speak of. Wealth in real estate and savings has not recovered across the board, much having been lost forever. Debt incurred during the depths of the crisis remains to be paid, and wage growth for those outside the top brackets has been minimal. Increased employment has been largely low-wage. Persistent levels of poverty have increased the need for social spending such as Medicaid. Huge tax cuts taken in 15 states during the depth of the “recession” in the delusion of “stimulating growth” have made the situation worse. Energy-producing states faced the additional problem of collapsed prices in oil and gas. 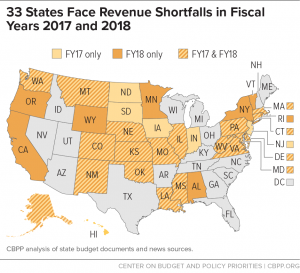 Thus, during fiscal 2017, 33 states had revenue levels lower than they had projected, and a number of them had severe budget crises. The worst was in Illinois, but crises occurred in Connecticut, New Jersey, and Kentucky as well. They are currently severe in Louisiana, Indiana, and, of course, Illinois—to mention just a few.

In addition, there is the state dependence upon the Federal government, which itself has been cutting back support over recent decades. Budget analysts calculate the average dependence of the states on the Federal government to be about 30%, most of that going to transportation, Medicaid, and social assistance. With the passage of the 2017 tax bill, this level of support is about to be disastrously reduced.

These problems cannot be solved unless the United States again becomes a nation with a well-paid productive workforce, including in manufacturing; with a modern infrastructural base; and with a commitment to leaping ahead with scientific breakthroughs such as those last seen in the Apollo space program. To do that, Wall Street’s stranglehold on our financial system has to be broken, with Glass-Steagall and other tough financial regulation that prioritizes productive investment. The current massive accumulation of government debt has to be turned, Alexander Hamilton-style, into a capital base for investment in national rebuilding in areas such as high-speed rail, water infrastructure, and real energy-efficient power production (i.e. nuclear energy). Federal work programs are also needed to employ and educate older youth—just as FDR’s WPA did in the 1930s; the WPA built at least 4000 schools.

A productive economy with rising wage levels will not only produce a better future for all, but create a sound basis for growing state and Federal revenues. That’s what’s needed to fund a prosperous future for the children on whose behalf the teachers are striking.