Teachers Strike for the Common Good

April 8, 2018–The current wave of teachers’ strikes reflects a new wave of anti-Wall Street ferment with great potential. They are political strikes in the sense that the teachers are demanding changes in economic policy by their legislatures, which will not only improve their own living conditions, but those of the children in the educational system. The teachers’ unions are beginning to take responsibility for education and economic policy as a whole. 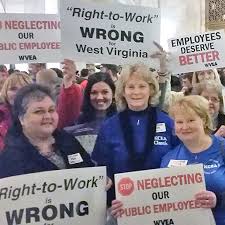 West Virginia teachers during their 2018 strike.

That promise will not be fulfilled, however, until the national adoption of a new FDR-style program of economic sanity, starting with Glass-Steagall and a new infrastructure bank .

The victory won by the 9-day West Virginia teachers’ strike, which ended March 6, provides a picture of this process. While the teachers in that state are among the lowest paid in the nation, they did not simply demand a 5% raise; they also demanded that the legislature not expand charter schools, and that they improve health insurance, and protect the unions’ rights to collect dues through paychecks. These demands they won, along with the same raise for all state employees, including the police!

How this was possible is a reflection of the broader politicization and support of the West Virginia population. While the teachers were rallying in the State Capitol, at the risk of losing their jobs by striking, the school superintendents of the 55 counties declared the schools closed every day of the strike. This was truly critical to the success of the teachers. By declaring the schools closed, the superintendents shielded the teachers from being accused of staging an illegal strike. The State Police “happened” to be stationed at the strike locations to provide security; volunteer babysitters came to attend to the kids for hours while the mothers were on the picket-lines. Community support was strong across the state.

It is relevant that West Virginia does have a strong union tradition, especially among the coal miners. In fact, the recent strike originated in the coalfields of southwest West Virginia, where that spirit of union solidarity remains vibrant.

Yet even in states without a strong union tradition—Oklahoma, Arizona, and Kentucky—the teachers’ unions are taking the lead in fighting for better conditions for all. The Oklahoma Teachers Association has announced that it will continue its one-week strike into the coming week. While they have won a substantial raise, they have set their sights on getting the legislature to make changes in the tax law to provide for more funding for education as a whole. A large portion of Oklahoma’s school districts are currently functioning on a 4-day week, due to lack of funding. The teachers want tax cuts for the rich rescinded to provide much needed books, raises for other school staff, and the like.

In Arizona, the teachers are the lowest paid in the nation. Here the union is demanding not only pay increases, but smaller class sizes and more funding for education as a whole until spending is brought up to the pre-2008 per pupil level. In Kentucky, teachers are fighting a measure that would decimate their pensions, which is now on the Governor’s desk for his signature.

To get a fuller sense of the background of the teachers’ strikes themselves, it is useful to look at the material put together by the Center for Budget and Policy Priorities (CBPP). As outlined in a CBPP study released in November 2017, the 2007-08 crash triggered a disaster in education funding in the nation. By slashing real estate values, the basis for the property taxes that fund the bulk of local education, the crash severely cut the revenue flow. This process was then accentuated by a wave of tax cuts for the wealthy enacted by state legislatures throughout the country.

While some states moved to reverse the education crunch as property values went back up, many did not. According to the CBPP report, 29 states still are funding primary and secondary school education at a lower per-pupil ratio than they did in 2008.

As the accompanying chart shows, the greatest of those cuts (36.6%) occurred in Arizona, the center of the current teachers’ strike action. Oklahoma also had a significant cut of 15.6%. 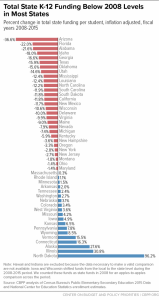 Bargaining for the Common Good

Over the same post-2008 period, the clout of labor unions, especially public service unions, took a major hit.  Membership has declined significantly, and the unions are now bracing for a possible Supreme Court decision that would weaken them further by taking away their ability to collect dues from all members covered by their contracts.

In response, a number of public service unions decided to take the approach of allying with other sections of their communities. A new strategy entitled Bargaining for the Common Good was initiated by the Chicago Teachers Union (CTU) in 2012. That strategy called for the teachers’ union to join their demands for better wages and working conditions with demands for better education overall—lower class size, better conditions for service workers, after-school programs, and even expansion of low-income housing.

Thus allied with parents and other groups, the CTU won a significant victory in 2012. Its approach led to 130 unionists, community organizations, and researchers coming together in May 2014  to plan a new approach to public budget campaigns that united public service workers and the communities they serve. Representatives of the states of Washington, Oregon, California, Minnesota, Wisconsin, Illinois, and Ohio attended, and agreed to take a broader bargaining approach, which explicitly includes challenging Wall Street’s priorities. To quote the Bargaining for the Common Good website: “Going on the offensive must involve taking on the forces of financialization, privatization, and tax-scamming that are distorting the economy, driving surging inequality, and opening the public sector to private plunder.” 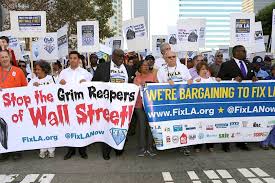 A demonstration by Bargaining for the Common Good.

While none of the unions involved in the latest teachers’ strikes appear to be affiliated with the Bargaining for the Common Good alliance, their affinity for this approach is obvious.

The union movement is taking on vital issues of policy, although generally limiting itself to the local level. That local limitation is what must change. The country is facing a new major financial crisis, as the result of sticking to the Wall Street program that brought on the 2007-2008 crash, as well as a collapsing national infrastructure requiring national attention. A change in national direction is urgent now.

The characteristics of the change required can be identified in the Franklin Roosevelt and Kennedy administrations. FDR’s support for unionization helped build the labor movement in America, and labor served as a vital constituency for his program of economic reconstruction. Kennedy’s “new frontier” of space exploration relied heavily on a skilled labor base, which desperately needs to be rebuilt today.