June 11, 2019—The 2008-9 period of mass housing foreclosures may be over, but the housing crisis in the United States is not. Exorbitant prices in the nation’s major cities, along with burgeoning homelessness centered in many of those same locations, attest to a major disconnect between people’s needs and “the market.” Combine that with the swaths of deserted homes in places like Detroit, Baltimore, and Cleveland, and dilapidated structures in rural towns across the nation, and you begin to get the picture: A substantial portion of the United States population is “ill-housed.”

June 13 is the anniversary of President Franklin D. Roosevelt’s first major action addressing the housing crisis he faced in the Great Depression.  On that day in 1933, the Congress passed the Home Owners Loan Corporation Act; it set up the Home Owners Loan Corporation (HOLC), which had a mandate to “provide emergency relief with respect to home mortgage indebtedness, to refinance home mortgages, to extend relief to the owners occupied by them and who are unable to amortize their debt elsewhere….” The idea was to stem the tide of evictions and foreclosures which had thrown millions of Americans onto the streets, including into the famous “Hoovervilles.” 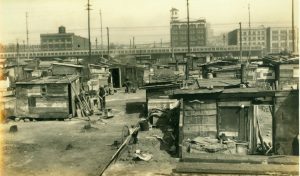 “Hooverville” in 1930s’ Seattle, one of the largest in the country.

The fundamental principles behind the HOLC, one of the key institutions FDR used to deal with the crisis, are still valid today, although they obviously do not apply in the same way to renters, who are also in crisis. In this relatively short post, I recall the history of the HOLC and its guiding tenets. I then raise certain crucial considerations for the development of a policy to deal with today’s housing crisis.

The Home Owners’ Loan Corporation (HOLC) began with $200 million in government money for start-up capital, and the power to market more than $2 billion in government bonds, in order to purchase delinquent mortgages from savings and loans banks before the owners defaulted—i.e. prevent foreclosures. But rather than simply purchase the mortgages from the lending institutions, the HOLC then rewrote the mortgages for the homeowner, with longer terms and lower interest rates. HOLC agents dealt with homeowners case by case, adjusting terms and even providing additional aid in order to ensure they could remain in their homes. This practice revolutionized the market.

Due to the HOLC practices, home mortgages, which had previously required down-payments averaging 35% and had terms of five to ten years at interest rates of up to 8%, were radically changed.  Increasingly, they were replaced by 15-year loans (later 25 to 30) with a maximum interest rate of 5%.

The main beneficiaries, according to later analyses, were people with incomes of between $50 and $150 per month. These people would have been prime targets for losing their homes. In fact, 40% of all mortgage holders applied to the HOLC, and half of them were accepted. By 1934, the HOLC was estimated to hold one quarter of the nation’s home mortgages. 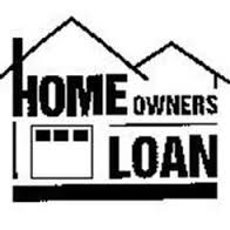 By 1936, the HOLC had written and held more than one million mortgages, with a value of more than $1 billion.  These loans had been taken off the books of the Savings and Loans banks, which had been decimated in the Depression collapse. In 1934 they came under the jurisdiction of the Federal Savings and Loan Insurance Corporation, and they began to write new mortgages on longer terms, and with lower interest rates. In 1938, this process was further bolstered by the creation of the Federal National Mortgage Administration (the much-discussed Fannie Mae), which was authorized to purchase home mortgages.

It should be emphasized that the original Fannie Mae system was never intended to authorize a speculative market in the mortgages which it purchased or loaned against. This kind of speculation, as demonstrated in the infamous housing bubble collapse of 2007-8, was a product of subsequent deregulation of the banking system.

While the HOLC issued no new loans after 1936, it continued in operation until 1951, concluding with a modest profit!

FDR’s view on housing was similar to his view on other crises that were threatening the basic welfare of the American population: Government power, especially credit, must be used to protect people’s living standards when they are threatened by economic royalists or unchecked market forces. This is a key principle of the American System of Economics which locates value in the productive powers of labor.

Candidate FDR expressed his view succinctly in his address to the Democratic Party Convention which nominated him on July 2, 1932:

The Republican leaders [Today it’s most of both parties-ed.] tell us economic laws–sacred, inviolable, unchangeable–cause panics which no one could prevent. But while they prate of economic laws, men and women are starving. We must lay hold of the fact that economic laws are not made by nature. They are made by human beings.

Thus, when tackling the foreclosure crisis of the early 1930s, which was hitting the farm sector as well as cities and towns, FDR put the priority on keeping roofs over people’s heads, rather than guaranteeing the monetary values of the property, or the financial paper that secured it. When speculation had driven up prices to levels that threatened people’s livelihoods, then speculation had to be curbed, and prices brought under control. 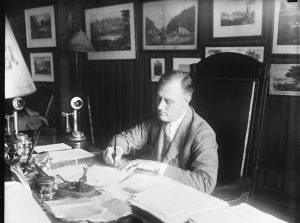 The mechanism for carrying out this aim was the provision of government credit—either in terms of underwriting and insuring new mortgages, or in permitting the construction of new homes (or apartment buildings). This was the concept behind the HOLC and the subsequently-established Fannie Mae.

By regulation of the credit system, and the appropriate use of tax policy, FDR intended to ensure the creation of sufficient decent housing to serve the population.  This plan included a limited amount of public housing, some of which was initially built by the Public Works Administration; later, the creation of local public housing authorities was authorized by the Housing Act of 1937.

Fundamentally, the goal was what FDR stated in his 1944 Economic Bill of Rights: “the right of every family to a decent home.”

The housing crisis of today has taken the form of an affordability crisis, and a burgeoning of homelessness, largely centered in the major urban centers of the country.

The affordability crisis is hitting both homeowners and renters. According to the 2018 report on the State of the Nation’s Housing by the Joint Center of Housing Studies at Harvard, median home prices have risen 41% higher than inflation over the years 1990 to 2016. That has resulted in people delaying home purchases. The price rise is 20% for renters over the same period. Compare that with the stagnation of wages for all but the top tier of society, and the problem is obvious. 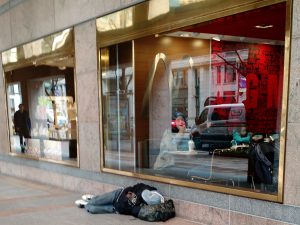 A homeless man in Washington, D.C.–a true reflection of the real economy.

The rental crisis has become the most visible. The Harvard Study cited above reports that half of all renters nationally pay more than 30% of their income for rent, and thus struggle to be able to make ends meet. The highest rates of rental occupancy are in the major cities—which is also where the highest rates of homelessness are now evident. HUD’s “single night” survey, taken in 2018, put the number of homeless nationally at 552,830. That is likely an understatement.

As reported in USA Today on June 8 of this year, Los Angeles is the epicenter of the homeless crisis.  Tent “cities” have been erected throughout the city, and the count is up 12% over last year. Rents in L.A. are reported to be more than 50% greater than the national median.

Similarly, disastrous conditions are evident in many other cities, from San Francisco, to Seattle, New York City, and Washington, D.C. Seattle has seen the rise of parkways or roads lined with RVs, where the homeless have “settled down.” The city declared a state of emergency around this situation as far back as 2015, but it persists, and there is a growing backlash against those people who are  “camping out” because of the lack of affordable housing. 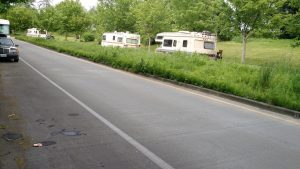 A row of RVs housing the homeless in Seattle, 2018.

The crisis has taken a different form in cities like Detroit, where whole neighborhoods were abandoned during the 2008-9 collapse.  A November 14, 2018 article in Huffington Post analyzed and humanized the crisis in that city, by describing the lives of squatters who have taken over abandoned houses in order to have a roof over their heads. Author Kate Abbey-Lambertz summarized the situation thus:

One in three Detroit properties ― about 145,000 ― has gone through tax foreclosure in the last 15 years. In the last five years, more than 30,000 occupied homes were put in the county auction and sold to the highest bidder ― often speculators scooping up multiple properties ― bringing in millions in revenue for Wayne County, which contains Detroit.

Officials have slowly begun to implement systemic changes to stem rampant foreclosure, as increasing evidence emerges to back up what activists have been saying all along: Under state law, many foreclosed owners should have had lower taxes or could have been exempted from paying them altogether.

What is to be done?

I do not have a comprehensive plan to propose to deal with the housing crisis per se. The first step is to address the reality of the disaster facing hundreds of thousands of our fellow citizens, and put a priority on providing decent housing for all. The solution to homelessness is not more homeless shelters but an ample supply of more affordable decent homes.

Clearly, a solution will require a shift out of the speculation-dominated marketplace which is now bleeding dry our productive and infrastructure base, and into a newly industrialized economy. Such a shift will require a return to Glass-Steagall banking regulation, the creation of a source of trillions of dollars of government-backed credit for revitalizing our infrastructure and workforce, and initiating major cutting-edge science driver programs such as the space program. Wages will rise substantially within such a new economic environment.

But there is no excuse for a situation where apartments that are little bigger than a walk-in closet in a suburban McMansion go for $1500 and more. These inflated values are ultimately the result of a speculative real estate market that has been created by fraud and outright looting. Such a speculative bubble can and should be rationally brought under control through tax policies and other government regulations. So-called affordable housing mandates should actually be affordable, and supplemented by the building of public housing where necessary.

FDR took a big step in this direction when he created the HOLC, and resuscitated the Savings & Loan sector, providing the latter with protection against speculative games. The same principles need to urgently be applied today.