April 12, 2018—Recent research published by Wolf Street on the spike in subprime auto loans, and the emerging difficulties in that market, should point our attention again to the firewall urgently needed to protect the American financial system from catastrophic collapse: Glass-Steagall.

The subprime bubble in auto loans is, admittedly, nowhere near as large as the subprime housing bubble in the pre-2008 crash period. However, the phenomenon Wolf Richter describes is by no means confined to auto loans. And the rate of growth, as shown in the accompanying chart, is truly astounding. 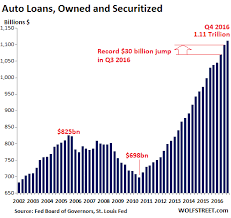 WolfStreet’s April 11 article  documents a crucial characteristic of the current post-Glass-Steagall landscape, the dependence of so-called non-bank lenders on the major commercial banks. He cites an analysis by the Wall Street Journal of bank filings which shows that “bank loans to non-bank lenders have surged sixfold since the Financial Crisis to nearly $345 billion at the end of 2017.” The major commercial banks loan to the non-banks at a low rate, allowing the non-banks to extend loans at high interest (subprime rates) to customers. Then the major banks slice and dice the auto loans they received as collateral into asset-backed securities of the same risky nature we became so familiar with during the “mortgage” crisis of 2006-8.

Thus, when defaults on auto loans increase, it is not just the nonbanks which are at risk, but the commercial banking system itself.  A rising wave of bankruptcies in subprime auto companies (which themselves have been an increasing favorite of certain private equity companies) begins to call the question. And auto loans are just one of the bubbles out there, which will also become increasingly unsustainable in the face of rising interest rates.

We’ve seen this movie before.

This new example directly exposes the oft-repeated fraud used to argue that the lack of Glass-Steagall controls on the commercial banks was irrelevant to the financial crash, because it was the non-bank lenders (the shadow banking industry) who made the bad loans and collapsed. Under the deregulated, Wall Street-dominated financial system gradually put into place from 1971 on, distinctions between commercial banks and other lenders have been increasingly erased. Gambling by “non-banks” (and so-called investment banks) has become the dominant feature of the entire system, and makes it all subject to collapse.

Re-imposing Glass-Steagall banking separation, however, would bar the major commercial banks from carrying out this risky operation, if they wanted to continue under FDIC protection. Such a house-cleaning needs to be carried out without delay.