July 6, 2019—As of July 1, 12 states raised their gasoline taxes, in a concerted effort to get the revenue to deal with their collapsing bridges and highways. The actions follow a pattern from recent years, over which time the Federal share of contributions to building and maintaining the nation’s transportation (and other) infrastructure has been falling, forcing the states to try to take up the slack.

Of the 12 states taking action, Illinois took the biggest step, doubling its regular gas tax with an increase of 19 cents a gallon. The other states raising the gas tax (in many cases, the tax increase on diesel was even higher) were, in order of size of increase: Ohio, California, South Carolina, Maryland, Rhode Island, Tennessee, Vermont, Indiana, Montana, Michigan, and Nebraska. (It should be noted that gas tax increases weren’t the only taxes raised, but they are the ones generally explicitly earmarked for infrastructure spending.) 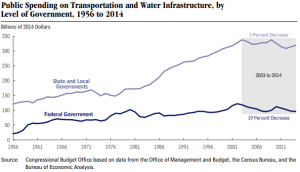 This graph by the Congressional Budget Office notes the collapse of Federal infrastructure spending by 19% from 2003 to 2014 (shaded area).

The state actions represent a rousing vote of no confidence in Congress (and the Administration) moving ahead with their promises for a major Federal infrastructure package. But such local revenue measures cannot substitute for the necessary national commitment. For example, a quick survey of internet news reports turns up that there have been a series of bridge collapses in various parts of Ohio over the past few months. Preventing such disasters is just a small part of the picture.

What is needed is a major upgrade in the nation’s transportation system as a whole: construction of high-speed rail networks to crisscross and connect the nation, urban transit systems to obviate debilitating and costly traffic jams, and much more. That’s not to mention the need to address one of the most dangerous threats of collapse of transportation infrastructure in the nation—the 100-year-plus rail corridor connecting New York City and New Jersey.

There is no substitute for Congressional action to establish a Hamiltonian National Infrastructure Bank, which would be capitalized with already existing Federal government debt, thus permitting issuance of the trillions of dollars in credit needed to repair and upgrade our national system. It’s no accident that the legislature of two of the states which raised their gas tax—South Carolina and Illinois—have passed Memorials to Congress urging passage of just such a Bank.