State Budget Crises: The Latest Examples of a Collapsing Economy

July 6, 2017–Another nail was driven into the coffin of the myth of the so-called national economic recovery on June 30 when 11 states announced they would have a heck of a problem in balancing their budgets. State governments are mandated to have a balanced budget by the end of their fiscal year, which was June 30. Many of the states cobbled together fake band-aid budgets to meet the deadline, but they really only kicked the can down the crumbling, crisis-riddled road. Leading the pack was Illinois, which has not had an operating budget in three years. Other states in similar straits included Connecticut, Delaware, Illinois, Maine, Massachusetts, New Jersey, Oregon, Rhode Island, and Wisconsin, while Pennsylvania and Michigan budgets still need to be signed by the Governor.

The state crises only mirror the national crisis. The gross national debt is nearly $20 trillion, and the current federal deficit is running at over $350 billion for this fiscal year. The Gross Domestic Product, itself a woefully misleading estimate of the economy, is running at about 1-2% increase this year, but job creation is occurring in lo- income or part-time mainly service jobs, which generate little in the way of taxable revenue, or enhanced spending. On top of that, productivity is limping along at barely .5% per annum, a sign of a dying body not fit for life support.

The deficit-riddled states used various measures to come up with the money, on paper anyway, but these were merely stop-gap, crisis-management solutions, at best. Pennsylvania Senate Democratic Leader Jay Costa admitted: “A year from now, someone will be standing here and probably repeating the same thing.” Instead of a plan to increase the revenue base, the operating budgets were “balanced” simply by squeezing revenue from a shrinking pie, or increasing taxes on the backs of already burdened citizens. Each state adopted different tactics to temporarily solve their problems.

In late June, the Illinois House approved a major income tax increase to generate $5 billion, with more than a dozen Republicans breaking ranks with the Republican Governor. The Senate adopted a similar plan, with one Republican joining his Democratic colleagues. Republican Governor Bruce Rauner immediately vetoed the legislation, but the State Senate quickly overrode Rauner’s veto on Monday, and the State House did so today. Intense pressure from the districts forced the Republicans to break ranks with the Governor. 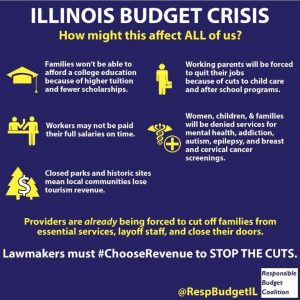 The results of the economic collapse in Illinois.

As Illinois has been operating without a budget for two years, dire cuts are resulting in universities losing accreditation, social service providers closing their doors, and road construction workers being laid off. In addition, the state’s credit is being threatened with junk status, which would spike the cost of borrowing to pay the unpaid bills, which would then offer even fewer options. But there should be no illusions: Illinois has an annual deficit of $6.2 billion and unpaid bills of nearly $15 billion. The United Way is predicting that 36% of all social service agencies will close their doors by year’s end.

Although the austerity-mongers want to blame the crisis on the state’s agreement to pay negotiated pension obligations to the government workforce, the real problem lies with the lack of economic growth. Various studies have shown that Illinois’s rate of growth –an increase of just over 4% of GDP over the last decade—is worse than it was during the Great Depression, and one half of the national average today. Only a massive economic expansion will address this crisis.

The real problem is the collapse of the real economy. Half of the states received less in taxes than expected, a result of the ongoing decline. Pennsylvania has a $2 billion shortfall, its worst in seven years, and has no competent plan other than more state-sanctioned gambling to remedy the mess. The geniuses in the governor’s office are considering borrowing $1.5 billion to plug the shortfall, but interest payments on the loan will drive the final cost to over $2.2 billion, since the state will have to pay more than $700 million in interest. Wisconsin has a $1 billion shortfall, and the major problem in the budget is how to fix and improve crumbling roads.

Connecticut is in worse shape. The state has a $5 billion deficit and is projected to run a deficit of $2.3 billion in 2017-18, and $2.8 billion in the following fiscal year. Standard and Poors, Fitch, and Moody’s Investors Services all downgraded Connecticut debt this spring, which increased borrowing costs. As of now the state has no budget, and legislators are expected back in the capital on July 18 to continue working on a plan.

Connecticut, the richest state per capita in the nation, also has seen a massive collapse in income tax collections. The cause of this fall has been attributed to the deterioration of the vaunted hedge fund sector, the gambling den of iniquity that has finally taken it on the chin. Hedge fund profits are down to near zero in the tanking economy, so hedge fund managers, “honorable men”, have figured out every way to stop paying taxes. A significant percentage of them reside in the pricey New York suburbs around Greenwich, Connecticut and have simply connived to short the state of anticipated revenue. Hence the seemingly rich state is on the verge of bankruptcy. This is not mere metaphor; the state capital Hartford is now in serious discussions about joining Detroit, Birmingham, Harrisburg, and others in filing municipal bankruptcy.

Many of the now crisis-riddled states have landed on various temporary schemes. Washington State raised property taxes by $1.6 billion, but the bulk of the burden is going to fall on middle-class families who can ill afford the massive hike. The average Seattle homeowner will pay $400 more in property taxes per year. Rather than increase income or capital gains taxes, which would fall more on wealthy families, the legislature put the burden on lower and middle class families.

Sen. Reuven Carlyle, D-Seattle, said that “they can hold on all they want to this stereotype cliché that this is a tax increase on rich city folks, but the truth is, this is middle-class people statewide, and real families.” He said, “Property owners will have a jolt of reality when the tax bills arrive. And there’s going to be implications at the voters’ box.”

This crisis begs the question, “How do we get out of this mess?” PA Senate Democratic Leader Costa correctly calls the solutions band aids instead of durable fixes. He calls for enacting a steady revenue base, but offers no workable plan to do it.

However, the plan does exist. But it does not mean just throwing money at the problem. Since January 2017, seventeen state legislatures have filed bi-partisan resolutions, in various forms, calling for measures which would reverse the downward trajectory of the economy. The most comprehensive resolutions outline a four point FDR style recovery program, which echoes the American System policies that built the nation. It includes reinstating the Depression-era Glass Steagall legislation, creating a Hamiltonian National Bank for jobs and infrastructure building, and implementing an advanced space program as a science driver. Six of the states have filed resolutions simply to reinstate Glass Steagall. Not accidentally, the Illinois House did pass the most comprehensive resolution in 2016, endorsing the full four point program.

It is not by accident that the FDR measures are picking up support. Despite efforts to misreport and massage economic figures, reality shows conditions similar, or even worse, than the Great Depression. The resolutions reflect a different kind of thinking rather than “balancing the budget”. An increase in productivity is what is required. Much has been discussed on the urgent need for infrastructure rebuilding, but no proposal for how to fund it. Funding demands a return to Hamilton’s conception of a national bank, which worked every time the country increased productivity.

We witnessed during the last Presidential election that the majority of the American people want jobs and an economy that works for them, and not for Wall Street. In 1933, and other periods of our history, our nation made the right decisions, not on mere partisanship, but to really address the burning crises. This is not the time to “make a deal.” A return to the American System must be the only true arbiter for saving our nation.

It is time for the population, including state government officials, to impact the Congress: Adopt the American System solution, while you still can.