What: Book Signing and presentation of Hamilton Versus Wall Street

Oct. 22, 2019—Lovettsville resident and journalist Nancy Spannaus will present the case for Alexander Hamilton’s economics and their relevance today at the Purcellville, Virginia Public Library at 7 pm on October 28. Spannaus’s argument is presented in her book Hamilton Versus Wall Street: The Core Principles of the American System of Economics, published in February of this year, which will be available for sale and signing at the event. 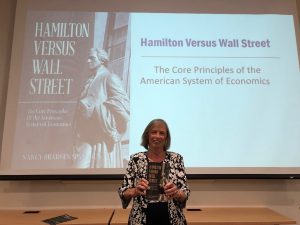 “Hamilton Would Have Been the Foremost Opponent of Wall Street Today,” Spannaus argues in her opening chapter. Unlike most popular presentations of Hamilton’s role, Spannaus’s book elaborates on his economic policy and the role it played in building the United States into the economic envy of the world. She traces his influence from the Washington Administration through FDR, and concludes that his principles are crucial to solving the economic problems of today.

Spannaus’s book has been described by Kirkus Reviews as “a thoughtful, well-written argument for Alexander Hamilton’s financial system as a guard against tyranny.” Economist Richard Sylla, author of Alexander Hamilton: An Illustrated Biography, noted that “In our time of crumbling infrastructure, anemic economic growth, and dysfunctional government, Spannaus points to a better path, the American System of economic policy initiated by Alexander Hamilton more than two centuries ago.”

“It’s wonderful that Hamilton, the Musical has stirred broad public interest, in Alexander Hamilton, especially among youth,” Spannaus commented. “But all too often, when they seek out more information, they are fed distortions or even lies. My book is dedicated to filling a gap in public knowledge of the real basis for U.S. economic growth, and hopefully preparing the basis for adopting Hamiltonian policies  once again.”