Jan. 28, 2019—On Jan 22 the South Carolina House of Representatives became the first state legislature in 2019 to pass a resolution calling for Congress to establish a National Infrastructure Bank. The proposed Bank, modelled on the successful national banking systems of Alexander Hamilton, John Quincy Adams, Abraham Lincoln, and Franklin Roosevelt, is cited as part of a four-point American Recovery Program.

A model bill for such an infrastructure bank is available here on this blog. While numerous national organizations, such as the Democratic Municipal Officials and the National Federation of Federal Employees, have endorsed this concept, no bill has yet been introduced into the Congress. 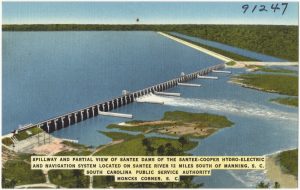 This dam at Lake Marion, South Carolina, was built by the WPA as part of rural electrification.

The memorial, Concurrent Resolution H3677, passed by a voice vote in the House, and has now been referred to the State Senate Finance Committee.

The full title of the Memorial is “A Concurrent Resolution to Memorialize the Congress of the United States to Enact Without Delay an “American Recovery Program” with Suggested Parameters and Specifications in Order to Provide Mechanisms to Restore the Health and Well Being of America and Its Citizens”.  After an introduction on the state of disrepair of the economy and the financial system, the Memorial calls for the following actions:

Similar resolutions, each with references to their own state history and needs, have been introduced into several other state legislatures to date, including Illinois (House), Minnesota (Senate), Missouri (House), Rhode Island (Senate), and Virginia (House). Watch for more news soon.