April 24, 2018—“Could the Fed Set Off a Debt Bomb?”, asked financial pundit Satyajit Das in an article for Bloomberg April 12. Das’s analysis of the minefield which the Fed faces in the weeks and months ahead, serves as a warning to those of all political stripes who keep mindlessly repeating that the U.S. economy is “in recovery,” and that the financial system is safer than it was on the precipice of the 2007-2008 collapse. 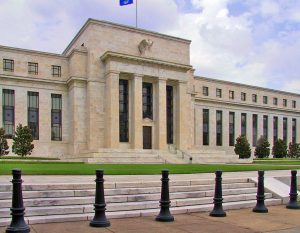 In fact, the Federal Reserve faces what looks on its face to be an unsolvable dilemma. It has poured trillions of cheap money into the financial system (Quantitative Easing), with no regard to ensuring that it goes into building up the physical economy. The result, amplified by the massive tax cut passed by Congress in 2017, has been the buildup of an unprecedented debt to GDP ratio (even counting the fact that GDP  doesn’t measure real growth); a huge stock market bubble; a resurgence of the junk bond market; and asset bubbles in student loan and auto debt, among other areas. The number of corporate bond defaults is already rising. Predictions of an inevitable crash are multiplying, even from “celebrities” like Microsoft’s Bill Gates.

Now, at least officially, the Fed is trying to take air out of those bubbles gradually, through small increases in interest rates, and a gradual reduction in its $4.5 trillion of bond purchases, used to bail out the financial sector. The trouble is, as financial analyst Nomi Prins has repeatedly pointed out , any such moves by the Fed threaten to blow up the system by the ripple effects of increasing debt service on corporations already swimming in debt.

What then can be done? The only solution lies in re-establishing rational controls over the banking system, separating the proverbial wheat (solid debt based on anticipation of economic growth) from the chaff (speculation). The first instrument to be applied is the re-imposition of Glass-Steagall banking regulations, as outlined in legislation already before Congress. Bank regulators will have a lot more to do, as they did during their inspections during the Bank Holiday in 1933.

As to the debt already created, the speculators can be left on their own, while strapped, but credit-worthy concerns can have it reorganized for long-term redemption. One of the major instruments for that should be a National Infrastructure Bank, supported by both government and private credit, and dedicated to creating actual wealth in the economy through its investments.

There is no way to painlessly pop a bubble, but there are tried-and-true American System methods for salvaging the productive economy and creating institutions that will mobilize existing resources for real growth. American System advocates have carried out such “bankruptcy reorganizations” of the U.S. economy at least three times: under Hamilton’s Treasury stint, Lincoln’s Administration, and the FDR Administration. Now it’s time for it to be done again.