Nov. 14, 2018—U.S. Senator Joe Manchin (D-WV), who was re-elected on Nov. 6, has put himself on record calling for the creation of a national infrastructure bank.  According to an Oct. 19 report on WJLS News, a Beckley radio station, Manchin raised the issue during a candidates’ forum with his opponent Attorney General Patrick Morrisey on Oct. 18. 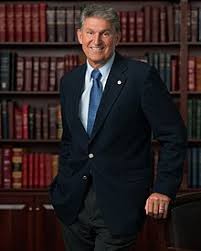 WJLS reporter Peter Davis reported that Manchin “suggested that the creation of a national infrastucture bank would help to address southern West Virginia’s physical infrastructure needs, as well as the needs of many other areas of the country where aging roads and bridges are a growing concern.” Manchin later told WJLS why he thought such a bank for a good idea:

An infrastructure bank would basically allow every state to plan for projects that could take three to five or six years, based on the money that was available to them, to match down. Right now, the highway bill, every year, has to be appropriated and done over. We’re not getting long-term planning at all, any more.

The one infrastructure bill that corresponds to Manchin’s idea is circulating in draft form on Capitol Hill, but has not yet been introduced.  It can be accessed here.