New York City, Jan. 12, 2019—The Alexander Hamilton birthday celebrations in New York City this year featured a fascinating lecture by Dr. Kate Elizabeth Brown, author of the recent book Alexander Hamilton and the Development of American Law. Brown addressed an audience of 60 plus Hamiltonians at a Jan. 11th event sponsored here by the Alexander Hamilton Awareness (AHA!) Society and the Museum of American Finance, arguing persuasively that Hamilton had a lasting impact on American law in the areas of due process of law and the powers of the Federal government. 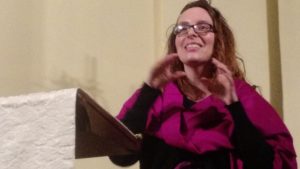 Most challenging to the typical conception of Hamilton’s outlook was her presentation of Hamilton’s role as a defender of individual rights, specifically the right to due process of law. People usually associate this with Jefferson and Madison, she said, but Hamilton was indeed “rights-conscious” statesman in his own right.

Preserving the Rights and Liberties of All Americans

Brown first took up Hamilton’s law practice in New York City prior to the establishment of the Constitution, a practice usually much maligned because of his defense of Loyalist clients. Hamilton’s decision to take these clients caused him much notoriety, and it is often seen as an indication of his British sympathies and desire to make a lot of money.

The context is crucial, Brown said.  What must be understood is that under the Law of Nations, individuals who received permission to occupy property vacated by an enemy force from the military in charge, were supposed to receive immunity from prosecution for their occupation. Yet New York State had passed a series of laws violating this common law principle, specifically the Trespass Act (1783) and Confiscation Act (1779). Thus, once New York City was no longer occupied, the state authorities went to town prosecuting loyalists who had held property, demanding back payments for its use, or simply seizing property belonging to individuals who had been designated as enemies.

Hamilton was outraged, not only because he wanted to keep businessmen (who had often been Loyalists) in the country, but because he saw the violation of the Law of Nations as simply replacing the tyranny of the King with the tyranny of the majority. As he elaborated later in his Phocion letters, there is great danger in setting the precedent of depriving a minority of their rights, in this case the right to due process of law. Today it might be the loyalists; tomorrow it might be the group to which you belong.

After reviewing the specifics of the Rutgers vs. Waddington case, and Hamilton’s strategy, Brown concluded: Hamilton was “very interested in preserving the rights of liberties of all Americans.”

While it should come as no surprise that Hamilton fought for “energy” in government, and specifically the energetic application of executive power, Dr. Brown’s example of Hamilton’s pursuit of this aim was quite intriguing. She recounted his role in establishing the Remitting Act, a statute which permitted the Executive, specifically the Secretary of the Treasury, to waive penalties under the revenue law if there were mitigating circumstances.

The Remitting Act arose out of the case of a ship owner who inadvertently did not comply with revenue statutes for importation in 1790, because he was unaware of the new law. His ship was seized as a penalty, and he petitioned Congress for relief. After Congress refused to act, Hamilton was given the petition, and decided that, because the violation was not intentional, the ship should be returned and the owner simply admonished to obey the law in the future.

Soon after, Congress passed the Remitting Act codifying the procedure for deciding on such cases. The Act set up Federal Court judges who would act as fact-finders, and then pass on their judgment to the Secretary of the Treasury, who would make the final determination. Thus the Executive had the power to effectively override the courts.

While the law apparently eventually lapsed, there are a number of important principles illustrated here, in the view of this writer. First, that of the importance of intent. If there is no criminal intent, a perpetrator should be treated more leniently. Second is the question of judicial discretion, whereby a statute is not implemented automatically (as by a computer), but the circumstances are taken into account. Such a principle lay behind the establishment of courts of equity, which were able to mitigate “letter of the law” judgments which were seen as perpetrating an injustice, or violation of moral law. 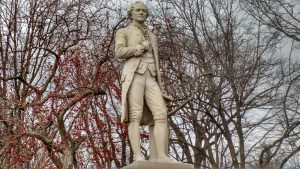 Dr. Brown’s final example of Hamilton’s shaping of American Law was the keystone 1819 case of McCullough vs. Maryland, the case which spawned Chief Justice Marshall’s landmark ruling about not only the constitutionality of the National Bank, but the inability of the states to tax it. This blog has written extensively on this case in our series on Justice Marshall, a strong advocate for Hamiltonian principles.

Ironically, as Dr. Brown described it, both sides in this case cited Alexander Hamilton’s arguments. The state of Maryland, which wished to tax the Second Bank of the United States, cited Federalist 32, in which Hamilton argues that the states retain their pre-Constitution rights except under certain conditions: 1) when the Constitution gives exclusive power to the Federal government; 2) when the Constitution denies certain powers to the states; and 3) when the application of this principle results in an outcome “contradictory and repugnant” to national sovereignty.

In the course of the discussion, another aspect of Hamilton’s lasting legacy was explored in response to a question by this author, that of the exercise of freedom of speech. The case in question was the Croswell case, in which a newspaper editor had been jailed for having “libeled” Thomas Jefferson. In coming in on the appeal, Hamilton argued that any determination had to consider the truth of the allegations as a defense, although even telling the truth with malicious intent should not be lawful. Dr. Brown opined that Hamilton’s stance in this case represented a step in the direction of the liberal standard of freedom of speech which we value today.

In sum, this lecture provided new insights into the positive role Alexander Hamilton played in determining the history of the United States. Hamilton’s role as a lawyer complemented his role as the founder of the American System of Economics by establishing principles of due process, equity, and executive power in defense of national sovereignty and the general welfare.