March 21, 2019—It’s good news that the state of Connecticut has reached a deal to keep its Millstone nuclear plant open. That plant, owned by Dominion Energy, supplies half of Connecticut’s electricity, and 19% of the electric power for New England as a whole.

Similar actions to maintain economically-stressed nuclear plants have also been taken in Illinois, Minnesota, New Jersey, and New York, where proponents of subsidy bills have argued successfully that eliminating “zero emissions” nuclear power would increase CO2 emissions. Major battles are currently underway in Pennsylvania and Ohio, where three plants are threatened with shutdown due to “free market” competition. 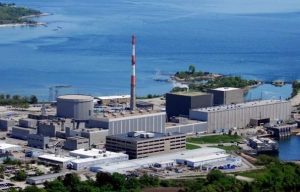 The Millstone nuclear plant in Connecticut.

Unfortunately, these are rearguard battles, which all too often proceed from the standpoint of seeing nuclear as a “necessary evil” during a transition to low-energy-density, unreliable, and uneconomical “renewables” like wind and solar. Such plans implicitly assume the desirability of a decrease in electricity consumption, at the very point where a dramatic increase is necessary in order to erase poverty, as well as to support high-speed rail, advanced water systems, and crash scientific efforts in medical, space, and fusion power research.

Surely, we don’t want to go down the path indicated by Barack Obama, when he told African students during his 2013 trip to South Africa that Africans could not aspire to have air conditioning and other energy-demanding advances of the “West” because they would overheat the planet! Indeed, the lack of electricity is killing poor people around the globe.

Nuclear fission power is the essential transitional energy source headed toward nuclear fusion, which relies on fuel that can be found in sea water. It has an unparalleled record of safety, and promises to be even more efficient, cheaper, and flexible with the development of what’s called fourth generation modular reactors. For this reason, a significant quotient of leading environmentalists has rethought their previous views, and begun to promote nuclear.

A nuclear energy revival will require rebuilding whole sections of our manufacturing base that have been destroyed, so it will take time. But it cannot come soon enough.