A Report on Joanne Freeman’s Talk on Her Book Fields of Blood: Violence in Congress and the Road to Civil War

October 4, 2019—When she began researching her book Fields of Blood 17 years ago, Yale professor Joanne Freeman did not have a crystal ball to predict the degree of polarization and partisanship that characterize American politics today. Yet, as became clear during her talk to a packed house at Mount Vernon’s Fred Smith National Library last night, her study of the 1830-1860 buildup to the Civil War holds valuable lessons—and gives hope—for today. 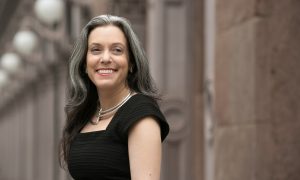 Freeman’s talk began with her addressing the question of why the intensity of violence in Congress during that period – an estimated 70 physically violent incidents—is virtually unknown. With pithy, and often surprising, anecdotes she then engaged the audience by filling out the picture of life in Congress during a period where the threat of violence constantly hovered over that institution.

Not until her conclusion did Freeman address the current political scene, although only in the most general terms. Her message was that the reason the United States has survived such periods of rampant distrust and polarization (of which the pre-Civil War period is only one), is the Constitutional process which the Founders had established. She cited Madison’s notes on the Constitutional Convention and, most significantly, Alexander Hamilton’s opening paragraph of the Federalist Papers, which I quote here:

It has been frequently remarked that it seems to have been reserved to the people of this country, by their conduct and example, to decide the important question, whether societies of men are really capable or not of establishing good government from reflection and choice, or whether they are forever destined to depend for their political constitutions on accident and force.

At the very conclusion of the discussion period, Freeman came back to that concept, stressing that the Founders, in all the turmoil they themselves experienced during the founding of our Constitutional republic, were committed to trying to answer this question in the affirmative.

There are two further aspects of Freeman’s presentation which I want to highlight. The first involves how she uncovered the story of the violence.

Other than the famed caning of Massachusetts Senator Charles Sumner in 1856, much of the violence that occurred in Congress is unknown, Freeman asserted. That’s because the Congressional Record deliberately suppressed it, referring to violent incidents in terms such as: “the situation became unpleasantly personal;” or “a sudden sensation arose in the corner.” So, what were her sources?  Primarily letters by Congressmen to their wives, in which they expressed their fears and observations.

Depiction of Congressional violence in 1798.

One that provoked great hilarity was the statement by one Congressmen that perhaps only large men should be elected to Congress—clearly the better to defend themselves.

Freeman also drew on the diary of an extraordinary witness, Benjamin Brown French, who chronicled his observations of Congress from 1828 to 1870. The diary runs to the length of 11 volumes, she noted, but a book of excerpts, entitled Witness to the Young Republic, A Yankee’s Journal, 1828-1870, was published by University Press of New England in 1989, and is thus more readily available.

The Evolution of the Violence

The violence in the Congress, which she estimated to have involved approximately 10 percent of the Members at any time, escalated over this 30-year period, Freeman noted. In so doing, it reflected the increasing polarization and violence within the population as a whole. Congress was truly representing their constituencies.

More than physical injury, she stressed, was the creation of an atmosphere of intimidation. This was established especially by the Southern delegates, who had an out-sized representation in Congress due to the 3/5 clause, and were being egged on by their constituents to defend the institution of slavery. In general, the Northerners were more loathe to fight.

Indeed, the Congressmen themselves fell into the categories of “fighting men” and “non-combatants.” I didn’t make up these terms, Freeman stressed; they were used by observers and Members at the time!

However, as the political conflict over the expansion of slavery intensified, especially in the 1850s, this situation changed. Increasingly, Northerners insisted that their representatives stand up against intimidation, and become “combatants” themselves. Freeman cited one instance where a number of constituents gathered to send their Massachusetts Congressman off to Washington, and surprised him with a gift—a gun inscribed with the words “free speech.” (The reference was to the fact that Southern pro-slavery Congressmen had imposed a “gag rule” against even receiving petitions on the slavery issue—a violation of the right to free speech.)

Yet violence on the floor continued even after the gag rule was repealed in 1844. What brought it to a close was the outbreak of a new level of violence in the nation as a whole, the Civil War.

Freeman’s book and insights are clearly valuable to our situation today, but I want to conclude with an issue she didn’t address last night, and probably not in the book. (I admit, I haven’t read it.) That issue is what the content of a positive approach to resolving such polarization would involve.

I addressed this issue back in a post in January of 2018, which was, ironically enough, entitled “A Government Worth Fighting For.” I was not advocating violence, of course, but for Congressmen to stand up to fight politically for the policies required to save the nation from further disintegration.  The challenge I raised has clearly not been taken up, despite discussions which I know are going on in some political circles in the right direction.

I highly recommend reading that article, and, if you are intrigued, follow up with my book Hamilton Versus Wall Street : The Core Principles of the American System of Economics.  I believe they serve as valuable complements to the shocking exposé which Dr. Freeman has provided.