June 21, 2017–Following the GOP’s stonewalling of discussion of Glass-Steagall over the past week, supporters of the Return to Prudent Banking Act (H.R. 790) in the House of Representatives have determined to take the fight to a broader level. Thus, on June 20, the lobbying group Public Citizen hosted the bill’s sponsor, Rep. Marcy Kaptur (D-OH), for a 15 minute video interview on its Facebook page , to explain why Glass-Steagall must be restored now.

Rep. Kaptur was introduced by Bart Naylor, the financial policy advocate for Public Citizen. Naylor has led the NGO’s efforts on behalf of restoring Glass-Steagall over the recent years, including organizing the gathering of hundreds of thousands of petition signatures for the bill in 2014. 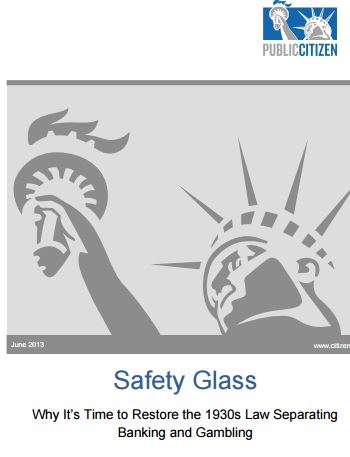 Naylor asked Rep. Kaptur a series of basic questions about the banking crisis and her bill, giving her the opportunity to explain the need for separating regular deposit banking from the “speculators,” investment banking. He then called on Public Citizen’s 400,000 members and supporters to call their Congressmen, and demand that they cosponsor H.R. 790. He made it clear that citizen pressure is urgently required, in order to counter the presence of Wall Street lobbyists on Capitol Hill.

At present, there are 53 sponsors on the Kaptur bill; another Glass-Steagall bill, H.R. 2585, has nine sponsors, as has its companion in the Senate, Sen. Elizabeth Warren’s S. 881. There is also a broad movement for restoring Glass-Steagall around the country, as reflected in the fact that memorials to Congress, urging restoration of the banking separation law, have been introduced in 17 states.

Pressure on Congress is all the more urgent since Treasury Secretary Steve Mnuchin has explicitly declared his opposition to separating commercial banking from the gambling “investment” banks. Mnuchin claims this is President Trump’s position. It is up to the President to prove him wrong, if he wants to succeed in his plans for massive infrastructure building and prosperity for the forgotten men and women of the United States.