May 3, 2018—A crowd filled up all the available seats at the Politics and Prose bookstore in Washington, D.C. last night, eager to hear Wall Street whistle-blower and renowned author Nomi Prins discuss her latest book. The author, once a Wall Street insider at Goldman Sachs, Bear Stearns, and Lehman Brothers, did not disappoint. 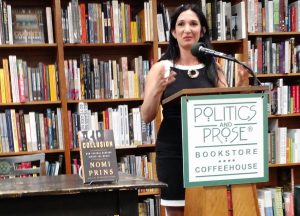 Nomi Prins present her book Collusion on May 2 in Washington, D.C.

In her new book, entitled Collusion: How Central Bankers Rigged the World, Prins documents her personal investigation of how the bailout of the world’s major bankers by the Federal Reserve, European Central Bank (ECB), and Bank of Japan (BoJ) after the 2008 crash, not only ensured that the super-banks would be the winners, but also have set the world up for a new financial fall, this one from an even great height of speculative bubble than the last.

With humor, down-to-earth analogies, and many personal anecdotes about her own interactions with leading players in the financial game, Prins explained the phenomenon of Quantitative Easing (QE). QE is the way in which the world’s central banks have fed trillions into the world’s super-banks, thus creating a new bubble. The result has been the creation of $15 trillion in QE among the Fed, ECB, and BoJ alone.

None of this money has gone to “Main Street,” she said. This situation is “not going to turn out well,” no matter how careful the central banks are in trying to deflate the bubble gradually with incrementally higher interest rates.

The banking system remains unhealthy, she said, and when a crisis of confidence hits, this time it won’t be mortgages, but corporate bonds which explode, since corporate debt has replaced mortgages as the risky securities to be bundled and passed on at higher and higher prices.

Prins briefly touched on what she would recommend as remedies to the current situation, which she said has scared the central bankers. First, some of the $4.5 trillion created by the Fed for QE could be collateralized for the purpose of investment in the real economy—meeting the U.S.’s infrastructure needs, for example. Second, some of the debt could simply be cancelled or restructured. And third, regulations separating speculation from investment in the real economy could be re-enacted, specifically Glass-Steagall protections.

The event concluded with a lively question and answer session, and book-signing.