May 29, 2021—”By 1967, 1968, 1970, in the Northeast United States, where power rates are nearly double yours, we are going to find atomic power increasingly competitive, and by the end of this century this is going to be a tremendous source. Our experts estimate that half of all electric energy generated in the United States will come from nuclear sources.”

That’s President John Kennedy speaking at the launching of the first civilian nuclear plant at Hanford, Washington on September 26, 1963. The President had just embarked on a “Conservation tour” of the country, in line with his firm belief that Americans had an obligation not only to protect the natural environment, but to use science and technology such as atomic power to improve that environment for the sake of future generations. That made him a nuclear power visionary. 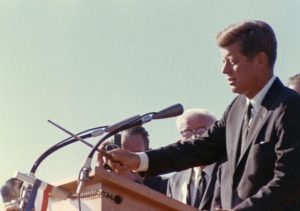 At the time Kennedy spoke, his administration was working on a perspective for rapid development of nuclear power production, both for electricity and for such vitally needed functions as water desalination. In March of 1962 the President had charged the Atomic Energy Commission with the task of doing an extensive review of the role that civilian nuclear power was playing, and could play, in the U.S. economy. The result was a 76-page report issued in November of that year.

It is from that report that President Kennedy got the estimate cited above. Its authors keyed off the mandate of the Atomic Energy Acts of 1946 and 1954, which committed the United States to using civilian nuclear power to “improve the general welfare, increase the standard of living, and strengthen free competition in private enterprise.” The report reviewed the benefits of the program, highlighting the inexhaustible source of fuel, especially if breeder reactors were to be developed, and discussed the progress made in making the plants’ operations more economical. It concluded that

nuclear energy can, and should, make an important, and ultimately vital, contribution to meeting our long-term energy requirements and, in particular, that: The development and exploitation of nuclear electric power is clearly in the near- and long-term national interest and should be vigorously pursued.

Furthermore, the report foresaw that, with the expected increases in efficiency and other improvements in operation, nuclear-powered electricity could basically eliminate the use of fossil fuels by the middle of the current century.

Note that this is precisely the goal being set for the United States today! With nuclear development, we could have been well on our way, and without leaving substantial sections of our nation’s productive workforce behind. But, as of now, nuclear power provides only about 19% of our electricity, albeit more than 50% of our non-carbon-emitting, and capacity is shrinking consistently. 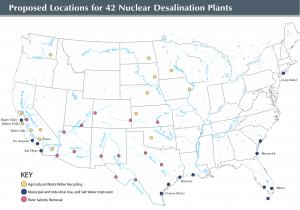 A map of potential nuclear desalination plants (the blue dots) as anticipated in a 1964 government report.

President Kennedy also commissioned studies of the potential for nuclear-powered desalination, which would go a long way to solving problems of water supply the United States now faces on all its coasts. Plans were underway for the construction of at least a dozen such plants, stationed largely on the coastlines of states like Texas and California. Along with implementation of a major water transfer project such as the North American Water and Power Alliance[1], the problems of water shortage (and today’s profiteering) could become a thing of the past.

In a sense, you could say that the day President Kennedy was assassinated, our nation’s optimism began to die. Our last president with a commitment to the American System was gone from the scene, and even those attempting to carry on his legacy, did not have the power and vision to see it through.

You see, Kennedy, like FDR, understood conservation from the standpoint of improving living conditions for all mankind. To quote his Hanford speech: “All this means that we put science to work, science to work in improving our environment and making this country a better place in which to live. I want us to stay ahead. Do you know that in the next 10 years, I hope the people of the United States realize it – we double the need for electric power every 10 years? We need the equivalent of a new Grand Coulee Dam every 60 days. In the next 20 years we are going to have to put in the electric industry $125 billion of investment, and when we do that, this country will be richer, and our children will enjoy a higher standard of living.” (emph. added)

But virtually all of Kennedy’s moves to put science to work in this way died in the aftermath of his death. The exception was the Apollo program, which succeeded beyond measure, injecting the last true technological revolution into our economy through applications in civilian life. 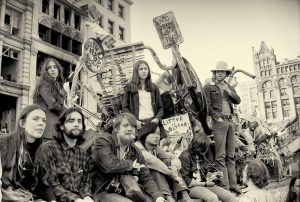 The opponents of Kennedy’s approach were many. To mention only a few: Big oil, which wanted to keep a stranglehold on energy, and ended up cynically funding the anti-nuclear movement; Malthusian ideologues who took hegemony in the environmentalist movements; and Big finance, heavily centered in the City of London and Wall Street. These powers worked to cut off Federal support and private funding for the build-up of nuclear power, working especially hard to make it so expensive that it would be rejected on that basis. And they used the growth of the counterculture to bring youth into the streets, creating the illusion of a mass movement against clean, peaceful nuclear power.

Note that fear of radiation was not among the major motivators of the opposition to nuclear, and in fact, some environmentalist groups in the 1960s actually supported nuclear power as the cleanest, most concentrated, and efficient source of the massive amount of electric power we need. This included the Sierra Club, which did not change to be anti-nuclear until 1966![2]

The coup de grace was actually the Oil Shock of 1973, followed by the election of Jimmy Carter and Paul Volcker’s astronomical interest rates.  In combination, these developments both reduced the demand for electricity (in the short term) and dramatically hiked the cost of borrowing money (needed to invest in plants). At the same time, the newly established EPA, under anti-nuclear President Carter, began to pile on increasingly onerous regulations which extended the time it would take to build a plant, thus increasing its cost substantially. 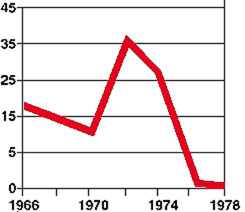 Thus, contrary to the story that it was the scare from the Three Mile Island incident that was the turning point against nuclear in the U.S., the mass cancellation of plans to build new plants occurred prior to that time. Plans for 40 plants were cancelled between 1973 and 1979, the time of Three Mile Island.[3]

My point in reviewing this history is primarily to try to shake loose some preconceived notions about nuclear power and its potential. Get familiar with the plans our best scientists had in the early 1960s. What did they know that you don’t? Acquaint yourselves with the thinking of JFK, who sought to carry forth the legacy of Franklin Roosevelt and spread progress at home and abroad. He didn’t accept the idea that resources were limited by anything other than the limitations we impose on our minds.

How did we lose this optimism?  Where can we find sufficient leaders who will stand up to entrenched opposition, to fight aggressively for the nuclear program we need today? 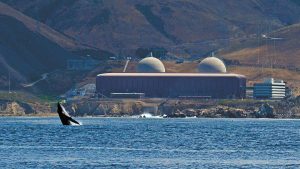 The American System of economics that Alexander Hamilton initiated has always been embattled, but in a sense, the stakes for its success have never been greater.  We are losing our cadre of skilled nuclear engineers. Powerful forces are threatening to destroy our most advanced centers of scientific innovation. We are destroying our environment with acres of toxic solar panels and ugly windmills. Indeed, nuclear power itself is a symbol of optimism for a better future for mankind, not as an end-all and be-all, but a step toward even greater breakthroughs to come.

As I publish this, the news that Illinois, which relies on nuclear power plants for more than 50% of its electricity, is on the verge of letting one of its plants be shuttered, largely due to the subsidization of non-nuclear renewables. A shift in thinking, and courage, is urgent indeed.

[1] The original Parsons plan for NAWAPA is previewed in the following video.

[2] A January 2017 TED talk by Michael Shellenberger lays out the shocking history of the anti-nuclear turn of groups like the Sierra Club.

[3] For a broader review, see this article by science writer Marsha Freeman.