May 20, 2019–George Washington’s “Grand Idea” of uniting the country through developing the Potomac River as the gateway to the West, was the subject of a lively book talk last night. Author Joel Achenbach spoke to a group of approximately 30 people about his book The Grand Idea, George Washington’s Potomac and the Race to the West. While the book was published 17 years ago, the topic remains of great interest today. 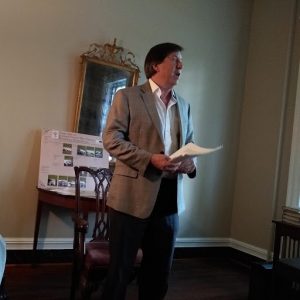 Achenbach’s presentation was sponsored by the Friends of Happy Retreat, a group dedicated to preserving and restoring the home of George Washington’s brother Charles Washington, which still stands in Charles Town, West Virginia. Walter Washington, a direct descendant of Charles, heads the group, and introduced Achenbach. “Happy Retreat” was the name Charles gave to his estate.

The relevance of the venue was underscored when Achenbach launched his talk, which focused, as does his book, on George Washington’s 1784 journey to the headwaters of the Potomac. Washington spent his third night with his younger brother Charles at Happy Retreat; Walter Washington was able to identify the room where they met!

Achenbach’s talk put appropriate emphasis on George Washington’s overriding goal of nation-building in pursuing his Potomac project. Washington feared that, having won the war against the British, the colonies might yet go their separate ways. He was consumed by the idea that ways had to be found, especially through commerce, to connect the growing population of the vast expanse of territory between the Appalachian Mountains and the Mississippi River, with the Eastern colonies. “He got the big picture,” Achenbach said. The states “had to be unified,” and he thought that making the Potomac River navigable held the key.

In Washington’s view, the Potomac was to become “a great river of commerce” to link East and West. This vision also played into Washington’s determination to locate the Federal City at the fall line of the Potomac.

Achenbach stressed that Washington’s idea of linking East and West through the Potomac waterway was shared by Thomas Jefferson, and Benjamin Franklin.

But Washington’s vision for the Potomac failed, Achenbach asserted, on two counts. First, the Potomac—which eventually had to be turned into a shipping artery through the creation of the parallel Chesapeake and Ohio Canal (C&O), rather than the river itself–was not able to handle the steamboats which became the core of 19th century commerce. Second, Washington didn’t realize that the primary fault line that would split the nascent nation apart was not the East-West divide, but the issue of slavery, which led us toward the Civil War.

In his talk, and the book, Achenbach closely followed Washington’s itinerary West in the fall of 1784. He relied heavily on a detailed diary which the President-to-be kept during that sojourn, which is full of discussions of the landscape, sleeping accommodations, weather, and the like. This narrative is then embellished with Achenbach’s discussions of the broader issues involved in Washington’s encounters along the way, such as his confrontations with squatters on his Western lands.

Washington’s attention to the minutest detail in that diary was mirrored in his recounting of his 1770 trip through the territory, where he mapped the Ohio River down to Point Pleasant, West Virginia, where it met the Kanawha. Achenbach reported the existence of a huge map done by Washington of his Western lands, which now can be seen at the Library of Congress.  Even the location of prominent trees is noted on the map by the meticulous surveyor. 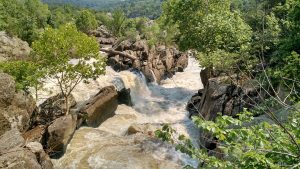 The Great Falls of the Potomac, which the Potomac Company had to circumvent. (Nancy Spannaus)

Upon his return from the West, Washington was involved in the diplomacy between the states involved with navigating the Potomac, the diplomacy that ultimately ended in the calling of the Constitutional Convention. His Potomac Company was established in 1785, and began work on trying to make the river navigable.  That didn’t succeed. Ultimately, the project was turned over to the C & O Canal Company, which began construction in 1828; the canal functioned as a significant commercial (and military) artery until 1924.

A significant element of Achenbach’s argument, and his book, is George Washington’s stance on slavery. Washington realized that the slavery issue was destructive to the nation, and he himself decided, at least as early as 1794, that he wanted to get out of that business. (In the book, Achenbach quotes a letter from Washington saying as much.) Washington had had a long-term policy of not selling his slaves or breaking up families. But he felt at a loss of how to deal with ending the practice. The fact that his wife owned more than half of the slaves on his plantation created personal, as well as political, complications.

Washington’s last will and testament called for the freeing of his slaves, although only upon the death of his wife. He stipulated that they be cared for if they wished to stay on the plantation, and that children without parents be “taught to read and write” and freed when they attained “the status equivalent of a white apprentice.”

Achenbach said in his talk that Washington considered this aspect of his will the most important part of it.  It certainly set him apart from the goodly number of other Founders who did not do the same. Indeed, in the book Achenbach quotes Thomas Jefferson ranting against the Missouri Compromise, claiming that he considered the attempt to stop slavery in Missouri “the knell of the Union.”

After listening to Achenbach and receiving a copy of his book, I did a very quick scan through it. Thus I have been able to supplement some of the author’s remarks with his written material. 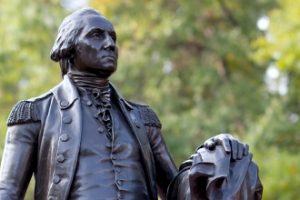 From my quick scan, I would have to say that his presentation suffers from a tendency to focus too narrowly on the Potomac project as Washington’s key effort to create national unity. Washington’s “grand idea” was conjoined with that of his Treasury Secretary and close collaborator Alexander Hamilton, who put together a financial system oriented toward developing and unifying the country into a technologically advanced, industrial powerhouse. In fact, Washington  promoted manufactures on his own plantation long before the Revolutionary War, and was committed to propagating them nationally during the War and in his Presidency.

Had those policies not been sabotaged during many of the Presidencies of the early 19th Century (especially those of Andrew Jackson), the slavery issue might not have led to civil war.  Hamilton’s industrialization policy, and that of his successors, was vectored toward wiping out the slave system, as Jefferson et al. were well aware.  Had the Hamiltonians succeeded, slavery itself could have died out, as it was expected by many to do at the time of the Constitutional Convention.

Yet, all in all, this was a refreshing presentation—free of the “politically correct” sniping and denigration of our great national Founders which is so prevalent today. Thanks to Joel and Walter for putting on this event.