May 25, 2019—The state of Pennsylvania will lose one of its five nuclear power plants in September, according to an announcement by its owner, Exelon, on May 5. Slated for the chopping block is the remaining plant at Three Mile Island—not because it represents any danger or is malfunctioning, but because it is losing money.

Once a nuclear plant is decommissioned, it cannot be reopened. 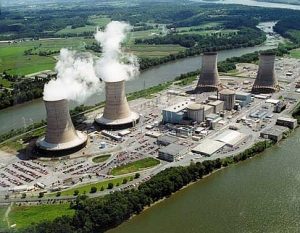 As this blog has reported before, nuclear energy accounts for 93% of the emissions-free energy in Pennsylvania, and is far more reliable than the “renewable” sources which are being subsidized by the state government. There is current legislation before both houses of the Pennsylvania legislature seeking to provide the same subsidies to nuclear as to wind and solar, but they have apparently not moved fast enough to forestall the Exelon decision.

Exelon’s partner, FirstEnergy, had announced last July that both the Three Mile Island plant and the Beaver Creek nuclear plant were in danger of closing, if measures weren’t taken to aid them financially. An appeal to Energy Secretary Rick Perry for Federal government action was turned down by the Federal Energy Regulatory Commission, and while other Federal action was mooted, it has not been forthcoming.

The nuclear industry and a growing number of advocates for nuclear energy have been conducting an increasingly intense mobilization over the past year, to try to save nuclear plants threatened by the deregulatory, pro-renewables environment. Several states have moved to classify nuclear as a “carbon-free” energy source, thus giving the nuclear industry a financial break.  Recently, Washington state joined the ranks of those states, which include Connecticut, Illinois, New Jersey, New York, and Minnesota, by “reinforcing the role of carbon-free nuclear energy,” according to the advocacy coalition Nuclear Matters.

Nuclear power, which provides approximately 20 percent of the electricity in the United States, is embattled throughout the nation. An estimate one-third of the remaining 98 plants are threatened with shutdown, despite becoming increasing efficient, and repeatedly proving their reliability under disaster conditions. Pennsylvania remains a crucial battlefield, as does Ohio.

While the nuclear industry has chosen to defend itself by accurately stressing its “no-carbon footprint,” the advantages of nuclear energy lie primarily in its greater productive power, reflected in higher efficiencies, and greater energy-density, of nuclear power plants. (Shutting down nuclear plants has also been shown in recent studies to increase carbon emission and energy prices.) An economy with great reliance on nuclear fission is a crucial transitional step toward the even cleaner and more efficient thermonuclear fusion power.

And for those who don’t know how to pay for it, there is a solution at hand.