Aug. 11, 2018–At a meeting July 29, the Northern Virginia chapter of Our Revolution passed a resolution endorsing a new National Bank for Industry and Infrastructure. The resolution text reads as follows:

The United States has implemented National Banking methods to successfully build infrastructure and industry in at least four extended periods of our history, including during the George Washington, John Quincy Adams, Abraham Lincoln, and Franklin D. Roosevelt administrations.

A new National Bank for Industry and Infrastructure could be capitalized with existing debt, accruing no new debt, and requiring a minimal dedicated tax to pay interest. This bank would enable trillions of dollars of new lending to be quickly channeled into the U.S. economy for infrastructure only. 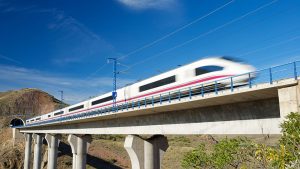 A Chinese high-speed train–the U.S. can do the same with an infrastructure bank.

Fifteen state legislatures, including Virginia, have introduced resolutions in support of this bank, and many labor, civil rights and other progressive organizations have also signaled their support.

Therefore, be it resolved, Our Revolution Northern Virginia: