Our Enduring Debt to Italy

A Reflection on the Occasion of Columbus Day

Oct. 14, 2019—The image of Christopher Columbus braving the dangerous, unknown seas until discovering land in the islands off America has long inspired patriots of the United States. From the earliest days of our republic, his name has been associated with the ideal of freedom from the oligarchical grasp of Europe, and thus was symbolic of the new republic being founded on these shores. It was with that image in mind, that the new Federal district was named the District of Columbia; that the 1798 song “Hail, Columbia” became the de facto national anthem of the United States for more than a century; and that the United States itself came to be personified as the goddess Columbia, as a symbol of freedom.[1] 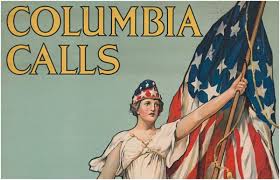 A poster of the Goddess Columbia, symbolizing the United States

Columbus the man may not have lived up to these encomiums, but his voyages of discovery (or re-discovery, if you will) have a world-historic significance that is much too little appreciated, especially in the current political climate. For the ideas behind much of the western exploration from Europe were, in fact, the same Italian Renaissance conceptions which inspired the creation of our republic.

It is those Renaissance conceptions of man’s role in the universe which are reflected in the conceptions of the American System of Economics, the conceptions which have, even in the midst of violent political resistance in this country itself, built the United States into a great nation. So, in this short post, I am going to break from my concentration on the American historical tradition per se, and look back at some of the Italian roots which we should cherish and revive today.

The city state of Florence is world-renowned as the center of the Italian Golden Renaissance, the literal “rebirth” of culture, science, and statecraft in Europe after the Dark Ages. From the 14th to the 17th century, that city generated a treasure trove of discovery which spread throughout Europe, and ultimately the whole world. At the core of these discoveries was the concept of the individual as made in the image of God the Creator, and therefore to be treated as such in social and economic policy. From this idea came the concept of the Commonwealth, a political order dedicated to the education and improvement of its population through scientific and technological progress. 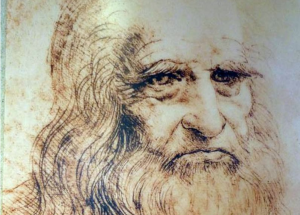 Americans are generally aware of one of Florence’s greatest citizens, the universal genius Leonardo da Vinci, who was born in the nearby small town of Vinci but worked in Florence for a good portion of his life. But there are two other Florentines from Renaissance times who had a direct impact on our nation: Paolo Toscanelli (1397-1482) and Amerigo Vespucci (1454-1517).

Toscanelli was a prominent mathematician and close collaborator of the great German Cardinal and scientist Nicholas of Cusa (1401-1464). His study of the heavens led him to map-making, among other endeavors, and many scholars have credited the report that it was his map of the Atlantic which made its way to Christopher Columbus, for use in his voyages across the Atlantic.

Amerigo Vespucci, of course, was himself an explorer, who made two or four (the number is disputed) voyages across the Atlantic, during which he explored the coast of South America, including areas of Argentina, Guiana, and Brazil. These occurred between 1497 and 1504. Vespucci himself did not name the lands he discovered after himself; that was proposed in 1507 by a German humanist named Martin Waldseemüller. It stuck.

The launching of the Renaissance, so-named because of the rebirth of Platonic Greek philosophy in that period, created a torrent of ideas, including in the arenas of statecraft (today, people would reduce it to governance) and economics. The school of thinkers devoted to that area of thought called themselves cameralists, so-called because they worked in chambers as advisers to rulers or kings, especially on economic policies. Cameralism spread to France and Germany, and thence to Commonwealth advocates in England and the English colonies.[2]

The core concept behind cameralist statecraft was that the prosperity of a state depended upon the adoption of policies which fostered the improvement, materially and spiritually, of the citizenry. This was a revolutionary idea at the time and remains so in many parts of the world today. It meant that a ruler had to devise a means of increasing wealth by making the citizenry more productive, but not by looting them. It meant changing from a situation where the vast majority of the population were enslaved, or virtual slaving beasts, to one in which common people were assumed to be educable and improvable–and therefore to a state policy which sought to implement such a policy.

Thus, as opposed to a situation of virtual war between rulers and their subjects, there was conceived to be a scientifically knowable common interest between them. The first purpose of the ruler was to provide for the prosperity of his subjects. You might call it the “general welfare.”

At the highest level, with the cameralists there came into being a school of statecraft and economics based upon the idea that man’s nature was imago viva Dei, in the living image of God. Man’s innate dignity and his creative capabilities were not simply to be recognized in church, but were to be understood as the foundation for sound economic and social policies.

The cameralists are sometimes known as the school of statecraft or economics which based itself on expanding population. This was directly related to their view that each individual was a net producer, rather than a drain on society, and that the source of wealth in society is not raw materials or land, but the productive powers of labor of individuals. It was a short step from there to the requirement to improve that productive power, through education and infrastructure and technological advance. 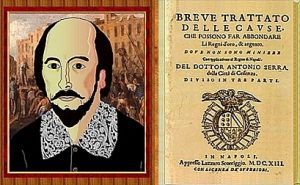 Antonio Serra and his brief Treatise on economics

The most prominent Italian cameralist was Antonio Serra, who wrote his Short Treatise of the Sources of Wealth of State without Gold or Silver Mines in 1613. Serra’s work was known to the German Hamiltonian Friedrich List (nineteenth century), but undoubtedly his work around Naples also spread to France, Germany, and Italy much earlier. Serra distinguished two kinds of wealth: accidenti propri and accidenti communi.

Accidenti propri he categorizes as follows: 1) wealth from bullion coming from gold and silver mines; 2) wealth resulting from an extraordinary geographical endowment, such as fertile agricultural land; and 3) wealth from extraordinarily strategic location for trade, as in the case of Venice. But clearly none of these sources of wealth can provide a general concept of how to create wealth, Serra argued, since only a few states are endowed with these special characteristics.

Then Serra discusses accidenti communi, which he describes as follows: 1) crafts and manufactures; 2) the quality of the population; and 3) the character of the policy of the state. These are elements of policy which any state can develop properly, regardless of geographical, climatological, or related conditions. Serra defines crafts and manufactures as the most important element for creating wealth, above agriculture. He argues that this is true because they guarantee a surplus, unlike agriculture, since they depend upon human work alone, not upon nature; because they can be expanded almost without limit; and because they can be transported over long distances.

Improving the quality of the population is the second policy Serra discusses. This means that the state has an interest in improving and educating people, and giving them the capability to learn and advance. His associate, Tommasso Campanella, expressed the concept this way:

God’s will is that science is taught not only to noble men but to all people . . .. Doesn’t that painter paint better who knows mathematics and other sciences, compared to the one knowing only the craft of painting? In the same way, the wise man cultivates the land more profitably than the ignorant peasant, who knows nothing about the peculiarities of soil, water, and air, or the different seeds, plants, grasses, etc. … If bricklayers, shoemakers, and other craftsmen would know about scientific ideas on the subject and proceedings of their work, and therefore rely not only on tradition, we would have better workers and a happier life.

The third determinant of the state’s prosperity is whether the government, or ruler, followed such policies.

What we see in Serra, overall, is an anti-oligarchical policy–one that demands constant progress for the population as a whole, and an active effort by the state to create conditions permitting that progress.

Historians have often pooh-poohed Serra’s influence, but his work is known to have been passed through Genovesi, and then into the broader political circles in Europe. What didn’t work in Naples, would find life in other locales.

These republican ideas of statecraft and economy were never realized in Europe, thanks to the political control by the oligarchical families there. Indeed, one of the prime motivations for some leading Europeans who moved to the American colonies, was to escape that oligarchical control and corruption, and get the opportunity to establish a true republic. To the extent that we succeeded, Europeans have indeed reaped the benefits. 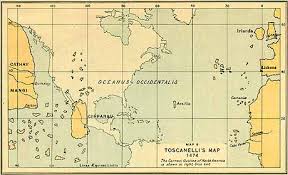 A depiction of Toscanelli’s map of the Atlantic Ocean

At present, however, this legacy of the Renaissance, and the idea of progress itself, is in peril. Those of us who understand its importance have the obligation to educate our fellow citizens, before it is too late.

[1] This image was notably evoked, perhaps for the first time, in a poem by the enslaved poet Phyllis Wheatley in 1775. See https://benjamindavidsteele.wordpress.com/2011/02/01/columbia-goddess-of-america/

[2] The following description comes from the Preface to the Second Edition of The Political Economy of the American Revolution, written by the author.