Opioid Legislation Passed: Not with a Bang, But a Whimper

Oct. 4, 2018—Passage of the SUPPORT for Patients and Communities Act, an omnibus bill purported to deal with the acknowledged public health emergency known as the opioid epidemic, with overwhelming bipartisan support in both Houses of Congress, is being heralded as a great achievement. In fact, from every point of view, it is a flop. 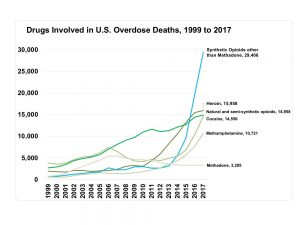 The composition of overdose deaths in America. (CDC)

The most crying need to deal with this crisis, which takes more lives every year (an estimated 72,000 in 2017), is to address its causes. That means dealing with the cultural despair that leads people to overdose, and requires a national mission, starting with a mobilization to overhaul and upgrade the nation’s collapsing infrastructure. Such a mobilization, if approached as President Kennedy approached the Moon project, and FDR approached the defeat of the Depression and the Nazi threat, would remoralize the U.S. population, while providing good-paying jobs, spurring scientific advance, and revolutionizing our productive base.

Such an approach has been proposed to Congress, most notably by Sam Quinones, author of the book Dreamland. But nothing has been done in that direction.

Such a broad mobilization must, of course, go along with a crackdown on the illegal drug trade, which has piggybacked on the opioid addiction crisis. That means going after the guilty pharmaceutical companies, and closing down the illegal drug routes, including those through the banking institutions which have been documented to launder drug money. According to Federal authorities, an increasing number of deaths are coming not from opioids but the even more deadly synthetic fentanyl, which is being smuggled into the country. This can, and must, be stopped.

In addition, of course, mitigation measures are required, including a vast increase in the availability of clinics, non-addictive treatments, and other medical care. Some of these measures are addressed in the omnibus SUPPORT legislation, including expanding the numbers of professionals who can deal with the problem, expanding the use of naloxone (used for revival of OD’ed persons), and adjusting Medicare/Medicaid rules—but with hardly any new money included!  That part has been left to the Congressional appropriations process down the road.

Money alone will not solve this crisis, but the failure to open up the spigots on a crisis which is devastating every portion of the nation, is indicative of blindness, or worse. It’s going to take years, if not a generation, to turn this situation around, and delay will have deadly consequences.