Opioid Deaths Leap Up: No Solution in Sight

August 17, 2018—Once again, the Centers for Disease Control (CDC) has issued a report which should shake Americans to the core. On Aug. 15 the CDC issued a preliminary estimate that 72,000 people died of opioid overdoses in 2017, a figure which represents a 7 to 10% increase over 2016. The CDC added that its figure is undoubtedly an underestimate. 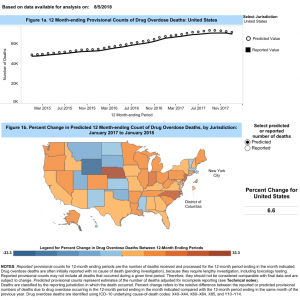 The CDC’s latest chart on the 2017 increase in drug overdose deaths.

The CDC report should be read in conjunction with a report issued the same day by the British Medical Journal (BMJ). The BMJ published a study showing that  ”during 1999-2016, all cause mortality in midlife increased not only among non-Hispanic (NH) whites but also among NH American Indians and Alaskan Natives. Although all cause mortality initially decreased among NH blacks, Hispanics, and NH Asians and Pacific Islanders, this trend ended in 2009-11. Drug overdoses were the leading cause of increased mortality in midlife in each population, but mortality also increased for alcohol related conditions, suicides, and organ diseases involving multiple body systems.”

“Midlife” is defined as between the ages of 25-64, prime working age. In fact, there are already a number of reports that the prevalence of opioid use is impacting the availability of skilled labor in certain areas of the U.S. economy.

In other words, despite an abundance of rhetoric about acting to stop the epidemic of “deaths of despair” which the opioid crisis represents, the United States is moving in the wrong direction. Minimal legislation aimed at mitigating the crisis, which was passed by the House of Representatives in June, is stalled in the U.S. Senate. Meanwhile, action to reverse the worsening trend by addressing the causes of the crisis is nowhere in sight.

A number of articles on this blog have directly addressed those causes, and we will not repeat their arguments here. Suffice it to say, in summary, that only a fundamental shift in the direction of the U.S. economy and goals, toward a positive national agenda similar to the Kennedy Space program, or the civilian equivalent of FDR’s World War II mobilization, can lift the spirits of the American population, and defeat the culture of death. Indeed, author and journalist Sam Quinones has presented an argument to this effect in testimony to the U.S. Senate.

Have we forgotten that an economy is fundamentally only as healthy as its population? Real economic prosperity, as understood by advocates of the American System tradition, depends upon the condition and productivity of its people, which in turn depend upon the Federal government’s commitment to improve infrastructure, living standards, and technological progress. Clearly, a growing fraction of the American population is showing by their actions that, positive macro-economic statistics aside, they are not experiencing progress.  They are killing themselves, and our country’s future.

In other words, unless there is a shift in economic policy toward the American System, all the lawsuits, local heroism, and police actions in the world will not stop this worsening disaster.