May 28, 2020—Several members of the Ohio State House of Representatives have joined the national movement in support of the establishment of a National Infrastructure Bank (NIB). In doing so, they join members of 17 other state legislatures, many city and county councils, the National Congress of Black Women, the National Latino Farmers and Ranchers, the National Association of Counties, the National Federation of Federal Employees, and many others in demanding immediate action.

The resolution notes that public spending on infrastructure has fallen by eight percent over the past 15 years, and that a new bank, properly capitalized by existing Treasury debt, would provide $4 trillion to meet the nation’s urgent needs, without requiring new appropriations. 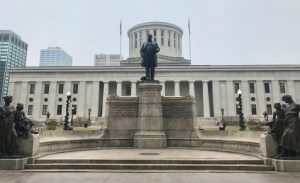 The 2017 report card on the nation’s infrastructure by the American Society of Civil Engineers gave the state of Ohio a low grade, and in 2019 it gave Northeast Ohio a D+, the resolution states. Ohio will need to invest at least twelve billion, two hundred million dollars to upgrade the drinking water systems, and fourteen billion, six hundred million dollars to upgrade wastewater systems. Nearly seven per cent of the state’s bridges are rated structurally deficient, and driving on roads in poor repair costs each driver 545 dollars a year.

Compounding the problem is the impact of the coronavirus pandemic on the economy, putting millions of people either temporarily or permanently out of work, and exposing shortages of hospital beds and equipment and machinery across all areas of the economy.

The resolution argues that a National Infrastructure Bank (NIB) could directly finance these projects and also put people who have lost their jobs back to work in higher-paying employment. A proper bank would be modeled on previous banks that helped build much of our nation’s infrastructure, including infrastructure in Ohio. Under Presidents George Washington, James Madison, John Quincy Adams, Abraham Lincoln, and Franklin D. Roosevelt, similar institutions helped finance the roads, dams, bridges, canals, power systems, and railroads that made our nation the envy of the world. The Reconstruction Finance Corporation, FDR’s version of a national infrastructure bank, helped bring us out of the Great Depression and win World War II.

Estimates are that such a bank could  25 million new, high-paying, Davis-Bacon wage jobs. It will raise productivity to three to five per cent per year, and increase the gross domestic product to the four to five per cent level. Those results were achieved previously and will occur again, the resolution notes.