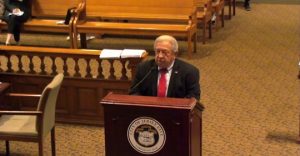 Forczek addresses the Jersey City Muncipal Council in May 2019.

Forczek begins his article by addressing the infrastructure crisis which is striking fear into the hearts of the citizens of the New York City-New Jersey region: the danger of imminent collapse of the system of bridges and tunnels which connects the two states, and are vital to the whole Northeast Corridor transportation system. While plans for replacement of the 100+ year-old bridge across the Hackensack River and the collapsing tunnels under the Hudson River have been devised (the Gateway Project), the lack of funding from the Federal government is holding up the project. As crucial as the Gateway Project is, however, it is only a small part of the problem.

As Forczek puts it: “Even if the Gateway Project were to be constructed, there remain thousands of deteriorating bridges used by rail operators between Boston and Washington, D.C. Many of those structures are likewise very old and in similar need of urgent repair. Were any of those bridges to collapse, train traffic would also stop, disrupting the GDP of the country. A point to bear in mind is that the Nation’s railroad lines were constructed in the 1850s and many remain with that same architecture; in comparison, rail lines in Europe and the Far East were designed and built in the 1960’s after the devastation of World War II.”

Forczek knows whereof he writes. He worked at Amtrak for more than 30 years, as well as serving as a consultant for a variety of engineering, energy, and financial services firms. 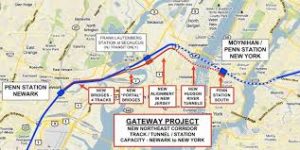 A schematic of the urgent Gateway Project.

After outlining other aspects of the national infrastructure crisis, Forczek lays out the case for a $4 trillion National Infrastructure Bank, created on the successful models of the Hamiltonian First and Second Banks of the United States, Abraham Lincoln’s greenback/national banking system, and FDR’s Reconstruction Finance Corporation. He describes the bank this way:

This bank would be capitalized in a way already used by other such institutions. It would monetize existing Treasury debt, thus creating no new debt, would be federally guaranteed, and would pay an interest rate approximately 2% above Treasuries. With the NIB in place, partisanship is removed from designation of projects and over 25 million new, high-wage jobs would be created. The increase in productivity and industry would yield a pay back of many times the expenditure, as occurred under all the previous national banks.

Already, 18 state legislatures, including New Jersey, have introduced resolutions to Congress urging that such a bank be immediately enacted. The Trenton City Council recently passed a resolution in support of the NIB, and our group has delivered testimony to many other elected bodies and institutions.

Forczek concludes by noting that, although no bill has yet been introduced to establish a NIB, the campaign for a National Infrastructure Bank has created “a real buzz” in Washington, D.C. This was reflected in the fact that, at the March 11 Congressional City Conference of the National League of Cities, Congressman Salud Carbajal (D-California), the vice-chairman of the House Transportation and Infrastructure Committee, proposed that an NIB be one avenue pursued by Congress to solve the funding problem. Forczek then calls on readers to join with the Coalition in the fight for the NIB, even offering his email sforczek@comcast.net so that people can get in touch.