July 6, 2018—On June 25, the Max Planck Institute for Plasma Physics announced that its WENDELSTEIN 7-X stellerator has achieved a world record in plasma temperature, density, and pulses, following an up-grade of the machine. Wendelstein 7-X, located in Greifswald, Germany, is the largest stellerator-type fusion experiment in the world. It began experiments in 2015 and then paused to bring in more advanced technology, which has allowed it to set records. 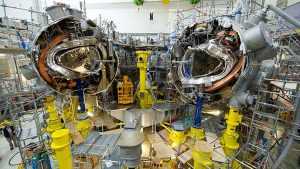 The Institute explained that the plasma vessel has been outfitted with new cladding, which allowed higher plasma temperature and longer plasma pulses. Improvements were also made in controlling the plasma purity. Plasma pulses of up to 26 seconds were produced. Dr. Thomas Sunn Pedersen summarized that the latest test results “are highly positive.” He said, “This makes us optimistic for our further work.”

Germany is not the only place where breakthroughs in developing nuclear fusion are occurring. Over the past year, records in achieved temperature and the length of a sustained reaction have been announced by the U.K.-based Tokamak Energy and China’s EAST reactor, also of the Tokamak design.

Meanwhile, work on the ITER, the experimental Tokamak reactor being built by an international consortium in France, is apparently proceeding on a schedule to reach full construction of a fusion energy machine which will create a self-heating plasma, one that comes from the fusion reaction itself—a “star on earth”—by 2025. (See testimony by ITER head Dr. Bernard Bigot here.)

The necessary breakthroughs in thermonuclear fusion–the next, most advanced form of power required by mankind—will demand a much more intense international commitment, however, not unlike that which the United States’ Manhattan Project carried out on nuclear fission in the 1940s. Such a crash civilian program, necessarily funded by governments, would cohere with the American System approach to achieving scientific and technological progress for all mankind.