March 4, 2018—The final word has not yet been said, but the Trump Administration is giving every indication of disavowing any Federal funding for a major infrastructure project on which a huge portion of the nation’s economic functioning depends. That project is Amtrak’s Gateway Project, a plan for replacing dangerously deteriorated tunnels and bridges connecting New Jersey with New York City.

The $30 billion Gateway Project, initiated under the Obama Administration, proposed to replace a 107 year-old rail tunnel under the Hudson River, which is now undergoing more rapid decay under the lasting impact of Hurricane Sandy.  The more than 100 year-old Portal Bridge over the Hackensack River is also due to be replaced with a Portal North Bridge. The rail connection between Newark and New York’s Penn Station is the only link between New York City and points south. The project was to be funded 50-50, at a pace of $3-4 billion a year from the Federal government, and the rest from the states and localities. No “user fee” cash flow for private investors was to be involved. 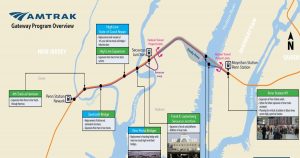 President Trump has gone from apparent support for the project, last summer, to calling for a withdrawal of Federal Funding altogether, in a discussion with House Speaker Paul Ryan Feb. 28. According to a report in Slate magazine, Administration officials have suggested that the project might reapply for Federal aid under the new 20-80 formula outlined in Trump’s infrastructure perspective, a plan that would mean involving private investors who would demand hefty user fees, and higher interest rates.

The first sign of trouble for the project came in July, when the Federal Department of Transportation representative withdrew from the Board of Trustees of the Gateway Program Development Corporation, claiming conflict of interest. In September, President Trump met with 16 state and Federal elected officials from New York and New Jersey on the project, and seemed to be in favor of it. Then in November, according to information just made public, the Administration downgraded the rating of both the new tunnel and Portal Bridge projects, making Federal funding unlikely. At the end of the year, a Department of Transportation spokesman ludicrously called the venture “a project of 90% local significance” only.

The latest blow came from President Trump himself this week

As one of the premier infrastructure projects already underway, the Gateway Project would be a prime prospect for funding by a National Infrastructure Bank, or Reconstruction Finance Corporation. While requiring Federal guarantees, such a long-term, low-interest loan could be paid off over 20 years with dedicated funds already assigned by the Metropolitan Transportation Authority. Any private company involvement would further hike costs and user fees, if available at all.

March 4, 2018—A new report, sponsored by the Milton S. Eisenhower Foundation, documents the stunning lack of progress, particularly for Americans of color, in the attempt to conquer poverty. “Healing our Divided Society: Investing in America 50 Years after the Kerner Report” takes up the findings of that report, which was commissioned by President Johnson after the 1967 riots, and describes the huge failure of the nation to defeat racist discrimination and the miserable conditions for tens of millions of Americans.

Among the most dramatic results:

In his summary of the report, economist Joe Stiglitz concludes that it while it shows progress for blacks in political representation, it documents that education and employment disparities persist, and that the wealth and income gap have gotten worse.

Contrary to the original Kerner Report, however, this update recognizes that the economic changes since the late 1960s have devastated an increasing segment of the white population as well. It calls for programs to address the overall income disparity in the nation, including increases in the minimum wage, more regulation of lenders, early childhood education, and so forth.

What’s needed is to take aim at the heart of the problem, the control of the U.S. economy by predatory Wall Street institutions which are prepared to sacrifice all sections of the population to maintain their power and profit. This could only be reversed by breaking that control with Glass-Steagall banking regulation , and a new federally-back credit system to re-industrialize the nation.

March 4, 2018–Today, the biggest subsidy — if you can call it that — propping up family farmers in the U.S., is the income earned working off the farm on outside jobs. Median income from actual farming itself, earned by farm households, was estimated at -$940 in 2016, according to the U.S. Department of Agriculture. For this coming year of 2018, it is forecast to worsen, and be in the range of -$1,316.

An estimated 60% of principal farm operators work off the farm; and many of these, as well as full-time farmers, have relatives or others who likewise work off-farm to subsidize the household, given losses in direct farm income.

The following are the levels of expected losses incurred for farming, by crop and per acre, as of December 2017, according to the Agricultural Policy Analysis Center at Knoxville, Tennessee:

For example, net revenue for cotton is slated for its seventh straight year of loss; and grain sorghum lost money for eight out of the last nine years.

The USDA Feb. 20 Economic Research newsletter began with the gross overview for 2018, under the headline, “Farm Sector Profits Expected To Decline in 2018.” The article reports: “Net farm income, a broad measure of profits, is forecast to decrease $4.3 billion (6.7 percent) from 2017 to $59.5 billion in 2018, the lowest net farm income level in nominal dollar terms since 2006… In inflation-adjusted (real) 2018 dollars, net farm income is forecast to decline $5.4 billion (8.3 percent) from 2017 and, if realized, would be the lowest real-dollar level since 2002.” (Net farm income is a “comprehensive measure that incorporates non-cash items, including changes in inventories, economic depreciation, and gross imputed rental income.”

March 4, 2018–The U.S. Senate is set to take up the Economic Growth, Regulatory Relief, and Consumer Protection Act, S. 1255, this week. Passage would mean a further major step toward dismantling the inadequate regulations put into effect by the Dodd-Frank bill. Given that 13 Senate Democrats have joined with the Republicans in support of this bill, it looks highly likely to pass.

The Democratic support has triggered a mobilization nationally, by such groups as Americans for Financial Reform (whose opposition we covered previously), Public Citizens, Root-strikers, and other groups from the progressive wing of the Democratic party.

Joining them with a particular focus on the Senators from Virginia is Our Revolution Northern Virginia (ORNOVA), the legacy organization of Bernie Sanders’ president campaign. The steering committee of ORNOVA issued the following statement and posted it on their Facebook page on March 1, urging calls into the offices of Senators Mark Warner and Tim Kaine:

MOBILIZATION ALERT to Members and Allies to Defeat Senate Bill 2155 Next Week!

S 2155 will likely come up for a vote next week.  This is the U.S. Senate bill that further deregulates the banking industry and rolls back the already inadequate provisions of the Dodd-Frank Act adopted in the wake of the financial crisis of 2008.  It is also likely that this bill will be further amended with House of Representatives provisions which passed several months ago, for even more deregulation.

Senator Warner and Senator Tim Kaine are among the 13 Democratic co-sponsors.  Please call or visit the offices of the two Virginia Senators as soon as possible.  Also, mobilize your social media networks, and write letters to the editor.  Ask the Democratic Party, Indivisible, Our Revolution, Labor Unions, and other organizations to issue formal statements against this bill, and mobilize their members.

Please Mobilize To Defeat This Bill.

March 4, 2018—It’s not the new Federal Reserve Chairman Jerome Powell’s fault that the U.S. markets went into a new nosedive after his maiden testimony before both Houses of Congress this week. The Chairman said nothing new or surprising to cause panic—but he didn’t say anything to reverse the current trends either.

U.S. stocks have already been primed for a rough future, between the new infusion of Federal debt which comes with the recent Federal tax legislation, and the Fed’s ongoing policy of scaling back its Quantitative Easing subsidies of the banks. Powell merely reaffirmed the policy of a slow scale-back, along with a concomitant, slow increase in the Fed Funds rate over the year (3 or 4 times is the projection). The trouble is that the market is already rotten-ripe for collapse, due to the massive quantities of highly leveraged debt, combined with an actually stagnant physical economy, as reflected in the ongoing abysmal level of its productivity.

Powell took the occasion to brag about the state of the economy, of course, citing a rise in wages by 2.4% year on year, an uptick in consumer spending, and an official 4.1% unemployment rate. He minimized the more troubling figure of the labor participation rate, which, at 62.7%, has reached the lowest level in four decades.

The Fed Chair was questioned by numerous senators on the wage stagnation, since the wage increases barely have beaten the rate of growth of official inflation. (The Fed has been mandated to operate not only to control monetary policy, but also to try to maximize employment.) Powell responded by agreeing that wage growth was not sufficient, but insisted that it could not be expected to grow faster without an increase in the productivity of the economy. To get higher productivity, he told Sen. Doug Jones, we need more investment in equipment, people, and research and development.

In response to Rep. Denny Heck(D-WA)  in his House hearing, Powell said:  “Wages should grow in keeping with productivity…. It really comes down to productivity. Since the financial crisis, productivity has increased by 0.5%/year. Wages have risen 2.5%/year. [a debatable point-ed.] Before the crisis, wages grew at 3.5%, because productivity grew at 1.5%. We need to have more productivity growth. And unfortunately, that’s not something we [the Fed] have the tools for.”

Who’s working on getting the investments needed to increase productivity?  Not the Fed, which is supporting further deregulation of markets. That deregulation, as with the 2107 tax bill, will continue to feed higher and higher levels of speculation, including huge levels of corporate buybacks of their own stocks.

To get an increase in productivity, what’s needed is a withdrawal of Federal support for speculation through the re-imposition of Glass-Steagall; and the creation of new sources of low-income, long-range funding for major infrastructure projects, especially those with new technologies. Congress could mandate the Fed to provide that funding under Section 13—as FDR tried to do in 1933–but the most sensible plan would be to turn the massive amounts of Federal debt into capital, by offering to trade such debt for stock in a new infrastructure bank.  See the current proposal circulating on Capitol Hill here .