March 11, 2018—Senator Elizabeth has moved in the only appropriate way, to counter the outrageous and dangerous move by the Congress (many Senate Democrats included) to give an even freer ride to the big banks, in a deregulation bill laughingly called the Economic Growth, Regulatory Relief, and Consumer Protection Act, S. 2155. As this Senate bill heads for a vote, Warren has offered 17 amendments for discussion, the most important of which is #10, which reads “Amend the #BankLobbyistAct to include the bipartisan 21st Century Glass-Steagall Act that would break up the biggest banks.”

Warren’s Senate bill to reinstate Glass-Steagall, S. 881, introduced last April with Democrat Maria Cantwell (WA), Independent Angus King (ME), and Republican John McCain (AZ), has been sitting with a total of 8 cosponsors for months. It calls for separating the commercial from investment banks over a period of time, and thus removing government support for the speculation which has brought the United States financial system to the point of a new imminent explosion of unsustainable debt. A vote on the amendment on the Senate floor would represent the first open Senate debate on reversing the disastrous repeal of the FDR-era legislation which kept the American banking system from a systemic crisis for 60 years.

Parallel legislation in the form of H.R. 790 (with 59 sponsors) and H.R. 2585 (with 12 sponsors) exists in the House of Representatives, and has also been denied a hearing.

There is little chance that the Republican Senate leadership will agree to adding the amendments to their deregulation bill, the details of which this blog went through last week. But the reduction of Federal oversight permitted in S. 2155 has been met with a spirited mobilization against the bill, and particularly the Democratic Senators like Virginia’s Mark Warner who have signed on to it. That mobilization succeeded in slowing down the passage, which was expected by March 9, and in inducing Senate Finance Committee Chairman Mike Crapo (R-ID) to add several amendments to allegedly eliminate some loopholes from surveillance for banks with problems on their records. However, groups such as Americans for Financial Reform fear that once S. 2155 hits the floor, the leadership might make it even worse, by using a “manager’s amendment” to substitute sections of the even more deregulatory legislation from the House. 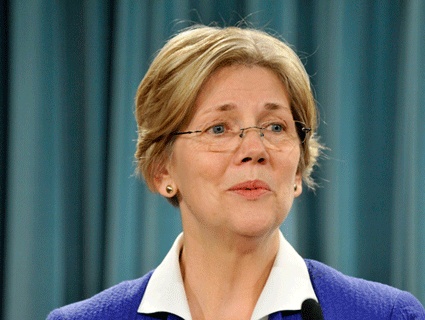 Meanwhile, Warren, who enjoys a lot of support in the progressive wing of the Democratic Party, is seeking to spur a broader mobilization by raising the core issue. She addressed a conference of Progressive Democrats in Baltimore in March 9, and went on both CNN’s State of the Union and Fox News Sunday today, blasting both the Senate bill, which she argues will increase the risk of a new blowout, and the 17 Senate Democrats who voted to start debate on it, and are therefore considered to be in favor.

Jamie Dimon Was Right about Buybacks

March 11, 2018–JPMorgan Chase CEO Jamie Dimon was right when he praised the Republican tax cut bill “QE4”, a new stage of the bailout of major corporations, including the banks. Dimon admitted the money corporations would get from the tax breaks would not go into improving wages, but into money-making ventures for themselves, including driving up their stock prices (a bubble) by buying their own stock.

The statistics are now coming out to vindicate Dimon’s forecast. The TrimTabs research firm announced that buybacks in February reached a record monthly level of about $155 billion. Thus the firm estimates that the figure will hit approximately $800 billion by the end of the year. As TrimTabs analyst Winston Chua put it: “If the pace keeps up, this year’s volume will smash totals from all other previous years going back more than a decade.” In this way corporations are blowing up the corporate debt bubble at an increasing rate—and worse, reportedly doing it by using margin debt to leverage their purchases. That means they are creating even more debt.

On March 1, Senate Democrats released a special report showing that following the passage of the GOP Tax Scam bill, corporations have spent more than $200 billion on corporate share buybacks, overwhelmingly benefitting corporate executives and wealthy shareholders while the middle class is left behind. Some corporations have even accompanied their buybacks with announcements of layoffs. Senate Democrats are tracking corporate share buyback announcements so the American people can see where the GOPTaxScam is really going on this site.

March 11, 2018—An article by Max Richtman, president and CEO of the National Committee to Preserve Social Security and Medicare, in the March 5th edition of The Hill raises the alarm as to whether the current leadership of the Center for Medicare and Medicaid Services (CMS) is moving toward dismantling the current system with a voucher program instead.

According to Richtman, in February, 15 Democratic Senators sent a letter to CMS Administrator Seema Verma expressing concern over a Fall 2017 Request for Information (RFI) regarding a “new direction” for Medicare’s Innovation Center — and the agency’s subsequent failure to make public the more than 1,000 comments it received.

The Senators point to the requests “ambiguous language” which suggests a shift toward converting Medicare into a voucher program, which would, “fundamentally restructure the guaranteed benefit traditional Medicare provides to older adults and people with disabilities.”

Richtman notes that such a move by CMS would cohere with the long-standing statement of intent by House Speaker Paul Ryan to privatize Medicare by turning it into a voucher system. He explains:

“Under the GOP’s voucher system, private plans could tailor their benefits to attract the youngest and healthiest seniors, leaving traditional Medicare with older and sicker beneficiaries.

“Their higher health care costs would lead to higher premiums that seniors would be unable or unwilling to pay, resulting in a death spiral for traditional Medicare.”

CMS Administrator Verma is already proceeding to weaken the Medicaid safety net, by approving state waivers that include work requirements for certain recipients. Richtman says that under her tenure, CMS has also “demonstrated a bias toward private Medicare Advantage plans over traditional Medicare.”

“We believe you are violating statutory requirements to safeguard older adults and people with disabilities from paying onerous out-of-pocket costs and going without needed health care,” the Senate letter to Verma reads. The full letter can be read here.

March 11, 2018—An article by former Reagan Treasury official Paul Craig Roberts, published on his blog March 7, rips to shreds the official Washington line that the U.S. economy is flourishing with an unemployment rate of 4.1 percent. Utilizing Bureau of Labor Statistics usually ignored, and the estimates of the shadowstats website, Roberts asserts that the real unemployment rate is likely to be in the range of 22-23%.

One knows something is amiss with the official statistics, Roberts writes, by their contrast with the labor force participation rate, which now stands at 63%. That rate represents the percentage of individuals in the active workforce (either employed or actively looking for work in the past 4 weeks), as a percentage of the potential workforce of the nation, which is defined as non-institutionalized individuals (including the army) between the ages of 16 and 65. This rate is low, compared to what would be expected in a healthy economy.

Roberts next identifies what segments of the population should be added to the 4.1% unemployment figure, if one were to get a true figure of unemployment. First, one would add those who have been discouraged and stopped looking for work over the past year. Adding those would bring the rate to 8.2%, by BLS figures. If one then added those who have been discouraged and out of work for more than a year, Roberts writes, the number would skyrocket to 22 or 23%.

This figure contradicts the whole idea that the economy is growing, Roberts argues. In fact, a whole range of official economic statistics is fraudulent, including measures of inflation.  He singles out the BLS “innovations” put into effect in the 1980s and ‘90s, which led to undercounting of inflation by adding cheap substitutes to the standard market basket of goods (hamburger for steak, for example), and classifying some price rises as quality improvements (the so-called Quality adjustment index). By the latter, the fact that you now pay 5 to 10 times as much for an item (say a car) allegedly means that it has increased that much in quality.  This defies credulity.

Americans are living in a “never-never land,” he concludes.

“In real terms, the request falls short of keeping up with the rate of inflation,” Slazer said. He recalled the history of presidents who made bold promises and then never funded them (such as President George W. Bush), describing the process as “schizophrenic budgeting and policy direction.”

“For NASA to reach its potential,” he said, “it’s time for the government to put its money where its mouth is.” He continued: “This year’s budget request felt like another ‘Groundhog Day,’ a film whose lead character wakes up every morning to the same day.” Taking on the leading “initiative” to come out of the recent National Space Council meeting, Slazer stated that commercial projects are not “the answer for inadequate NASA budgets.” The greatly hyped recent SpaceX launch “was based on technologies originally pioneered by the U.S. government.”

The commentary ended with the observation, (noted by Albert Einstein, though it’s not credited), that, “the definition of insanity is doing the same thing over and over and expecting a different result.” Finally, “we need to stop doing this with NASA’s budget.”

On Feb. 27, the AIA issued its own set of recommendations for NASA funding. In the introduction it stated: “AIA believes that our nation is underfunding NASA and shortchanging our future. While we’re not advocating for a return to 1960s-era funding levels of four percent of the Federal budget, we believe our investment should be substantially more than today’s 0.4%.”