March 18, 2018—If you listen to the apologists for S. 2155, the bank deregulation bill that passed the U.S. Senate 67 to 31 on March 14, you will be told that this legislation is being passed as a boon to small community bankers who have been hamstrung by the regulations in Dodd-Frank.  Once again, you are being lied to. 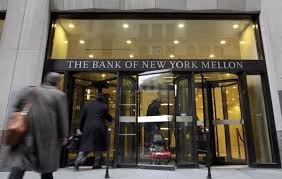 By raising the threshold for the closest scrutiny from $50 to $250 billion, “this legislation reduces oversight of 25 of the largest 38 banks, a group guilty of misconduct and recipients of some $48 billion in bailout money after the 2008 crash,” according the experts consulted by Public Citizen. Among the banks which will now be deregulated are the U.S. branches of such derivatives-chocked behemoths as Deutsche Bank and Credit Suisse; it also lowers the capital cushions required at major U.S. banks such as Bank of New York Mellon, the world’s largest asset-management bank.

In other words, the already highly overleveraged financial system is about to become even more unstable, if this bill passes, leading to a widely expected new financial blowout worse than that of 2008.

Senate Democrats Elizabeth Warren and Bernie Sanders did their best to ram this point home in the Senate debate, and among political activists last week. But the fact that 17 Senate Democrats stuck firmly with what they called this “compromise” meant the opponents went down to defeat. Senator Warren’s proposed amendments, including one on Glass-Steagall,  were not heard.

It should be no surprise that among the pro-dereg Senate Democrats were those receiving the highest amount of contributions from the financial sector, including Michael Bennet (CO), Mark Warner (VA), Tim Kaine (VA), and  Gary Peters (MI).

For final passage, however, S. 2155 has to be voted up by the House of Representatives, which itself has passed dozens of deregulation bills that go even further than the Senate bill. Rather than simply pass the Senate bill, House Speaker Paul Ryan and House Financial Services chairman Jeb Hensarling are insisting upon negotiating additions to the Senate bill which the Senate Democrats, in particular, are likely to reject. If they stick to their current demands, S. 2155 could die a well-deserved death.

That would be a good thing. And the Glass-Steagall legislation which should replace it is ready to go.

March 18, 2018—Congresswoman Tulsi Gabbard, Democrat of Hawaii, issued a call to action March 15, urging citizens to respond to Senate passage of S. 2155 by mobilizing for passage of H.R. 790, the Return to Prudent Banking Act which would reinstate Glass-Steagall regulations separating commercial and investment banking. Gabbard is one of 59 sponsors of H.R. 790

“Almost ten years after the 2008 financial crisis, too many politicians either haven’t learned the lessons of the devastating Wall Street crash and taxpayer-funded bailout that followed, or they have chosen to ignore those lessons and continue to serve the wishes of the Wall Street banks that fill their campaign coffers. Either way, it is a disgrace that 17 Democratic senators and 50 Republican senators voted yesterday to strip away regulations of most of our country’s biggest banks, increasing the likelihood of yet another financial crisis.

Add your name and join me as a citizen cosponsor of H.R. 790, The Return to Prudent Banking Act.

“Millions of Americans have struggled since the 2008 Recession, but Wall Street hasn’t. The banks that were too big to fail then, are even bigger today. The people who lost their homes, jobs and life savings were not bailed out like the banks were. They are not calling for Congress to deregulate Wall Street. They are calling for accountability, breaking up the big banks and holding them accountable for their risky behavior that devastated people’s lives and caused our economy to crash.

“So why is there a bipartisan push to deregulate Wall Street big banks? Too many members of Congress, from both parties, are listening to the banks and their lobbyists who write big checks to their campaigns, rather than listening to the voices of the American people who suffer as a result. This is corrupt and wrong.

“Add your name as a citizen cosponsor of H.R. 790 and give Congress a mandate to reinstate Glass-Steagall and break up the big banks.

“The system is rigged by powerful special interests who wield undue influence over our public policy. I don’t accept PAC money from Wall Street or anyone else, but in order to make change, we have to do it together. Your voice matters. Join me in taking action today.”

March 18, 2018—Despite a number of Senate hearings, Trump’s declaration of national emergency, and innumerable media stories about the tragedy, nothing substantial has so far been done to begin to reverse the staggering toll of the U.S. opioid epidemic. The crisis remains a chilling marker of the demoralization and despair of a large section of the U.S. population, which can only be reversed by an economic-cultural about-face similar to the New Deal or the Kennedy Space Program.

The latest Vital Signs Report by the Centers for Disease Control, issued in March highlights the following findings:

March 18, 2018—Whether the U.S. Congress decides to fund the international fusion project ITER, which is now building a prototype reactor in France, could very well be decisive in whether the project goes ahead to establish the feasibility of the new, cleanest, most efficient energy source yet known to man. For this reason, the March 6 hearing of the House Subcommittee on Energy, of the Committee on Science, Space and Technology, featured in-person testimony by none other than the Director-General of the International Fusion Project Organization, Dr. Bernard Bigot.

As we have previously reported, the Trump budget proposal for F2019 underfunds the needed U.S. contribution to ITER by 50%. In fact, the needed sum is a relatively paltry $150 million this year. As Dr. Bigot pointed out, the funding formula shared between the seven members (the United States, Russia, China, India, Japan, Korea, and the European Union) results in the European Union picking up 45-46 percent of the tab. The U.S. monetary contribution is approximately 9% of the total.

Dr. Bigot gave a detailed review of the ITER project, which has now gone 50% of the way toward “total construction work scope through First Plasma,” which is scheduled to be reached in 2025. This means full construction of a fusion energy machine which will create a self-heating plasma, one that comes from the fusion reaction itself—a “star on earth.” The Tokamak fusion reactor being built in France to achieve this end is comprised of parts contributed by the seven members of the project, which are then being fit together into a single, functional machine.

This process requires close collaboration, and has no room for slippage, Dr. Bigot testified. Everything must fit together perfectly to meet the international goal. But at the same time, the project represents progress for each of the nations involved. “If any ITER Member falls short in meeting its commitments, it jeopardizes not only that country’s fusion program, but the fusion program and roadmap of each of its partners as well.”

In that regard, it is equally relevant that the Trump Administration’s budget calls for substantial cuts in the U.S. domestic fusion program. The budget of the National Nuclear Security Administration’s Inertial Confinement program would be cut by over $100 million, or 20 percent. Within that, the budget for efforts to achieve ignition, a self-sustained thermonuclear reaction, would be cut by over 70 percent, from $78 million to $22 million. Support for academic research in high energy density laboratory plasmas would be eliminated, and NNSA would begin a three-year withdrawal of funding for the Laboratory for Laser Energetics (LLE) at the University of Rochester.

The proposed cuts would disrupt the progress of NIF experiments necessary for NNSA’s Stockpile Stewardship Program and shut down the pipeline of students and early-career researchers that replenishes the ICF workforce.

In his written testimony, available here, Director-General Bigot detailed the contributions of each of ITER’s Member states or communities, complete with illustrations. Should such a successful international collaborative effort be aborted, it would be tragedy for mankind.

March 18, 2018—There Is no question but that responsibility for the solution to the U.S. economic debacle—low wages, crashing bridges and railroads, rising death rates–lies in Washington, D.C. Congress and the Administration have the unique power to cut off Federal support for speculation, provide ample amounts of long-term, low-interest credit for infrastructure and other productive investments, and launch the new great projects in space and nuclear energy that will lift up the sights, and the productivity, of the American population. It is Congress that is constitutionally mandated to control the currency and credit of the United States.

Instead, we have seen Congress dither on the real available solutions, like reinstating Glass-Steagall and establishing a national infrastructure bank, while lawmakers move ahead to feed the crises by cutting taxes and feeding the speculative bubble.

The impact of these national decisions is writ large throughout the nation, especially in those states which have followed the same tax cut/spending cut philosophy as the Republicans are pushing in Washington. State budget crises are proliferating in places like Oklahoma, Montana, Illinois, Kentucky, Connecticut, Wyoming, Iowa, Arizona, and Louisiana, resulting in debacles like underfunded schools and a worsening, crippled health care, especially for the poor.

Take Oklahoma, for example. That state has implemented four major tax cuts for the rich since the 2008 crisis, resulting in budget gaps that have been systematically “bridged” by cuts in vital services. Most striking is the fact that 20 percent of the public schools in the states are now forced to operate on four-day weeks, due to a lack of funding. The legislature rejected new taxes this session, and thus further cuts can be expected.

Now look at Louisiana, which has followed a similar path. Its budget crisis has reached the point that New Orleans Times-Picayune columnist Robert Mann dubbed it a “failed state.”

Louisiana is also living with the legacy of a tax-cutting spree, launched by former Governor Bobby Jindal in 2008. Republican Jindal was replaced in   by Democrat John Bel Edwards in 2016, and that year a $1 billion temporary tax was levied in order to make up for some of the revenue lost by Jindal’s increased corporate tax breaks. But that temporary tax expires on June 30 of this year, and the Louisiana State Legislature is now looking at the potential for drastic cuts in Medicaid for home health care, university scholarship, and state-funded hospitals. A special session called in February to find more revenue failed, and now another looms.

The solution to these crises, of course, is not simply to “tax the rich,” although that should not be eschewed. The U.S. economy as a whole is running below “break-even,” due to a disastrous lack of productivity in the real physical economy caused by failed Federal policies. Federal credit is going to be needed to erase this deficit, but it must be vectored heavily toward enterprises and projects that will rebuild income and productivity—and eventually the tax base itself. That’s called the American System.