New Videos Show the Way Out of Crisis

Aug. 2, 2020—With dramatic footage from the administrations of Franklin Roosevelt and John F. Kennedy, a new video by the Coalition for a National Infrastructure Bank presents a crucial component of the way out of the U.S. economic crisis. Their argument is this: If the Congress passes H.R. 6422, the bill for a $4 trillion dollar National Infrastructure Bank (NIB) based on Hamiltonian principles, we can create 25 million good-paying jobs, and build the prosperity we urgently need. 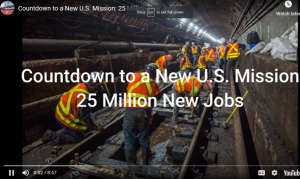 The 8-minute video, “Countdown to a New U.S. Mission,” can be accessed at https://www.nibcoalition.com/new-video-countdown-to-a-new-u-s-mission-25-million-new-jobs

The NIB bill was introduced into Congress by Rep. Danny Davis (D-Ill) on March 31. It has been cosponsored so far by Reps. Seth Moulton (D-Mass.) and Bobby Rush (D-Ill).

A crash mobilization to not only repair our rail, highway, water, and power infrastructure, but also to invest in new generations of technology such as high-speed rail, is precisely what will best address the current disastrous decline of the U.S. economy. With jobs disappearing en masse, tens of millions of American workers are looking for employment, while even previously existing funding for our dangerously dilapidated infrastructure is evaporating. The NIB’s mandate will directly address these needs, as it will be authorized to lend money only for infrastructure programs (including job training), and thus will fund the activities that will generate the productivity and the wealth to rebuild the nation. Its capitalization with existing government debt means no new deficit spending will be required.

Three members of the Coalition’s advisory board have produced a number of supplementary short videos to introduce citizens to various aspects of the workings and potential of an NIB. They are: The Role of Labor in the Rebuilding of the United States: How the National Infrastructure Bank Works; History of U.S. Rail and High-Speed Rail; and How to Create 25 Million New Jobs.

For those seeking a short introduction, the first Coalition video – Congress: Put America to Work with a National Infrastructure Bank – provides the basic overview.

All of these can be found on the Coalition’s website, https://nibcoalition.com.