July 18, 2021—I’m pleased to announce the posting of two new videos on the You Tube channel of AmericanSystemNow, both devoted to setting out the American System principles which have been buried or vilified for so long. 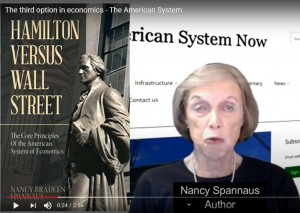 The first is a three-minute ad, suitable for circulating widely to those trapped in the free market/socialist tug of war which is crippling our government on the question of infrastructure, among other things. It cuts to the chase, pointing out how Alexander Hamilton’s credit system was key to building our nation, especially in times of crisis.

See it here. Then I urge you to get it around.

The second is a 45-minute interview I did on July 13 with the founder of the Public Banking Institute, Ellen Brown. The topic was my book, Hamilton Versus Wall Street: The Core Principles of the American System of Economics. I have posted the unedited video here. (The audio only is also available—see below.)

My thanks to Ellen for the opportunity to address her audience of active supporters of public banking.

Brown, who declared from the outset that the topic of Hamilton and the American System were “dear to her heart,” wisely put a particular stress on getting me to explain how the American System, conceptually and historically, differs from both Wall Street practices, and popular notions of socialism today. Hopefully, the discussion helped clarify the differences in principles, and point people in the direction of studying the American System itself. 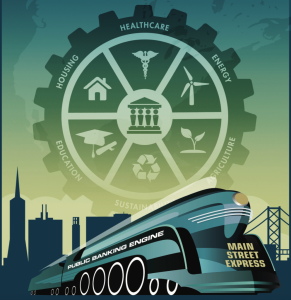 The logo of the Public Banking Institute

The key is Hamilton’s concept of public credit, which, as he put it in his Report on the National Bank, “is among the principal engines of useful enterprise and internal improvements. As a substitute for capital, it is little less useful than gold or silver, in agriculture, in commerce, in the manufacturing and mechanic arts ….” The book elaborates how this worked in our history.

My interview with Brown aired on her podcast “It’s Our Money” at PRN.FM (Progressive Radio Network) on July 14, and is also posted as a podbean and on the Public Banking Institute website.  The video will be edited for broader posting at some future date.