Jan.11, 2021—Today marks the release of an invaluable video documenting the record of Treasury Secretary Alexander Hamilton’s opposition to slavery.  Under the title “The Evidence for Hamilton against Slavery,” independent researcher Marianne Als beautifully synthesizes text, imagery, and music to support her argument that not only is there no current evidence that Hamilton ever owned slaves, but that he worked aggressively against slavery itself. 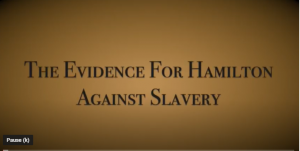 The full 36-minute video documentary can be viewed here. It deserves the widest possible circulation, especially in view of the prominent coverage that some establishment media have given to purported evidence to the contrary.

The release comes, fortuitously, on Hamilton’s birth date – making it a kind of belated birthday present for the most slandered Founding Father.

Als’ work has been featured at events sponsored by the Alexander Hamilton Awareness Society (AHA), a nonprofit organization dedicated to educating about Alexander Hamilton’s life and legacy. Founded in 2011, the AHA Society is also the official nonprofit interpretive partner to Hamilton Grange National Memorial, the Hamilton home in Upper Manhattan stewarded by the National Park Service. Als has also been honored by the Society as a National Hamilton Advocate.

In her video, Als gives prominent acknowledgement to “Opening a Door to Their Emancipation”: Alexander Hamilton and Slavery, a detailed refutation of many of the charges launched against Hamilton in a recent paper by a Schuyler Mansion document, Jessie Serfilippi. That refutation, produced by Hamilton scholar Michael E. Newton and the pseudonymous Philo Hamilton, is a treasure trove of material for researchers on Hamilton’s history. But Als also did her own extensive research on the topic, as indicated not only by the content, but the list of sources she provides at the video’s end. They include Hamilton historians and scholars, as well as resources from the AHA Society.

Marianne Als’ artistry in constructing her videos is a delight. Her ability to weave in original-source images, a narrative script, and quotes with largely classical musical selections, is extraordinary. My report on an early version of HamilStory Part 2, which I viewed at AHA Society birthday events in 2018, is available here. 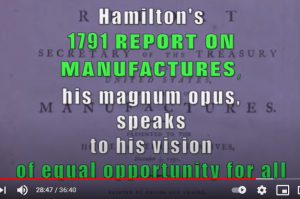 I was particularly pleased by her substantial attention to Hamilton’s economic vision, especially his seminal Report on Manufactures. In my view, there can be no adequate appreciation of Hamilton’s view on slavery without understanding his political economy.

It is to be hoped that this video documentary gets the very broad circulation it deserves, at a moment when the United States needs Hamiltonian economics more than ever.