April 20, 2018—Sanity prevailed in New Jersey this week, when both houses of the State Legislature passed energy legislation which will permit two of the state’s three nuclear plants to keep operating. The bill, expected to be signed by the Governor, will provide a $300 million a year subsidy to the plants’ owner, Public Service Enterprise Group, upon certification that it is a “zero emissions” energy source. 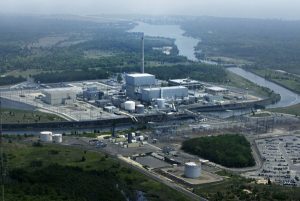 The Oyster Creek nuclear plant in New Jersey, the nation’s oldest, has gotten a reprieve.

The subsidy will come by way of a small surcharge on customers’ bills, which is anticipated to average between $35 and $41 dollars per year, per customer. This is a small price to pay to maintain the energy source which supplies 40% of New Jersey’s electricity, and employs 5800 workers directly. Those supporting the bill noted that electricity prices would increase significantly should the plants be forced to close.

New Jersey joins Illinois and New York in passing temporary fixes to maintain its most efficient (and carbon-free) energy supply. Discussions are currently underway in Ohio, Connecticut, and Minnesota to take similar action. The United States has 99 operating plants, of which at least a dozen are either planning to close, or threatened with closure soon, mostly for economic reasons. They provide 20% of the nation’s electricity.

Labor unions involved in the nuclear industry and nuclear advocacy groups are currently mobilizing to try to save their local plants, arguing that shutdowns will cost many decent-paying jobs, and eliminate the electricity source that has been most resilient and reliable under emergencies like the polar vortex and hurricanes.

State actions like that in New Jersey represent only a temporary respite for nuclear energy, which remains under attack nationwide by deregulation, subsidies for wind and solar (which themselves need backup energy sources for when the wind doesn’t blow and the sun doesn’t shine), and anti-nuclear propaganda.

The Trump Administration, and specifically the Energy Department, currently have before them a plea from FirstEnergy to declare that an “emergency condition exists … that requires immediate intervention by the Secretary, in the form of a Section 202(c) emergency order directing: (a) certain existing nuclear and coal-fired generators … to enter into contracts and all necessary arrangements …, on a plant-by-plant basis, to generate, deliver, interchange, and transmit electric energy, capacity, and ancillary services as needed to maintain the stability of the electric grid and (b) … to promptly compensate at-risk merchant nuclear and coal-fired power plants for the full benefits they provide to energy markets and the public at large, including fuel security and diversity, as detailed herein.”

While both President Trump and Secretary of Energy Perry have indicated they are considering the request, few expect them to grant the relief.  An actual solution lies in Congress taking up its responsibility to reregulate the utilities (as FDR did), and provide the trillions in credit for modernizing the nation’s power infrastructure, through a National Infrastructure Bank. This should go along with an educational campaign on the superiority of nuclear power–with its 92% efficiency rate, sterling safety record, and extraordinary power-to-fuel ratio–to not only renewables like wind and solar, but fossil fuels as well.